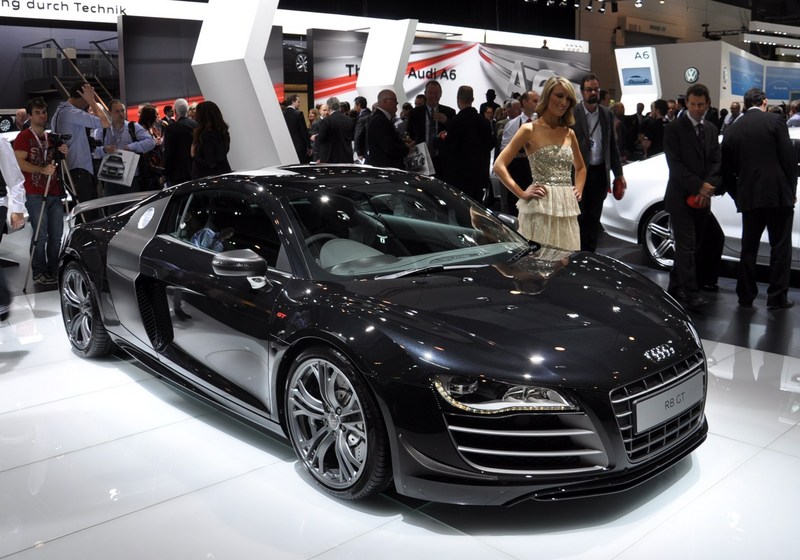 Lighter, faster and more powerful, the stunning 412 kW R8 GT is the pinnacle of Audi's performance engineering. From a global series production of 333 cars, just five R8 GTs are coming to Australia - all of which are already sold - making it one of the most exclusive cars on the road.

The production R8 5.2 FSI quattro is already a shining example of the Audi's lightweight construction philosophy. Its aluminium Audi Space Frame (ASF) body weighs only 210 kilograms. The aluminium body panels are joined to the frame of extruded profiles and cast nodes by means of positive and friction connections. The engine frame is made of ultra lightweight magnesium.

The ASF body is largely hand-built at the Neckarsulm plant in an incredibly sophisticated manufacturing process. The extremely high strength of the body is the basis for the high-performance sports car's precise handling, and it also offers rigidity, comfort and first-rate crash safety.

Thanks to the ASF body, the production R8 5.2 FSI quattro weighs only 1,525 kilograms - with quattro permanent all-wheel drive and optional R tronic transmission. This made it all the more difficult for the engineers to once again achieve substantial weight savings, so the engineers evaluated every aspect of the vehicle to reduce weight.

The windshield of the R8 GT is made of thinner glass; the bulkhead between the passenger cell and engine compartment, as well as the window in the rear hatch are made of strong, lightweight polycarbonate. These three modifications saved nine kilograms. The fixed rear wing is good for an additional 1.2 kilograms; thinner sheet metal and additional cut-outs shaved 2.6 kilograms from the aluminium hatch over the 100 litre luggage compartment at the front of the car.

The long rear hatch is made of carbon fibre-reinforced plastic (CFRP) - an advantage of 6.6 kilograms. The rear bumper and the sideblades of this same material save an additional 5.2 and 1.5 kilograms, respectively. With its minimal weight and extremely high strength, CFRP is the ideal material for a high-performance sports car, and Audi has broad-based expertise in its use.

The interior also harboured substantial weight-savings potential. The new, lightweight carpeting accounts for 7.9 kilograms; the bucket seats with a chassis of glass-reinforced plastic (GRP) account for 31.5 kilograms. Numerous additional detailed measures targeted the interior, the exterior and the technology, such as higher-grade, lighter steel for the exhaust system's tailpipes.

Even sharper and more effective: the design

The design of the Audi R8 GT is the expression of concentrated power - a beautiful, technical sculpture measuring 4.43 metres long, 1.93 metres wide and only 1.23 metres high. The exterior underwent numerous modifications that further sharpened the appearance. Many of them also reduce the weight and enhance the aerodynamics. The R8 GT produces even more downforce when driven fast than the production model - without any increase in the Cd value (0.36) or frontal area (1.99 m2).

The single-frame grille is finished in matt titanium grey; the grille is painted matt black. The splitter under the bumper has a double lip and is made of carbon. Slender, curved flics at the corners of the nose increase the downforce on the front axle and are also made of a carbon fibre composite.

One highlight of the R8 GT is the standard LED headlights, which use light-emitting diodes for all functions. They produce bright, homogeneous light; have long service life and low energy consumption. The headlights also have an attractive and distinctive appearance. The daytime running lights each comprise 24 LEDs and appear as a continuous band. The reflectors are reminiscent of open mussel shells.

The defining element of the side view is the sideblades, which direct air to the engine and in the R8 GT are also made of matte carbon. The same material is used for the reduced-size housing of the side mirrors, which are mounted on an aluminium base. The 19-inch wheels feature an exclusive five twin-spoke Y design in a titanium-look finish. The front fenders sport 'GT' badges.

The modifications to the rear of the car are particularly apparent, beginning with the fixed wing of matte carbon. The ventilation louvers on both sides of the rear hatch and the CFRP bumper, which integrates the large, round tailpipes and vents for the wheel wells, have been redesigned. The larger diffuser is made of carbon fibre composite; the license plate bezel and the wide slats at the rear are in matte titanium grey. The tail lights, which also use LED technology, have dark housings with panes of clear glass.

The modified V10, whose cylinder head covers are painted red, gives the Audi R8 GT breathtaking performance. The R8 GT sprints from a standing start to highway speed in 3.6 seconds, and from zero to 200 km/h in 10.8 seconds. The thrust does not let up until the top speed of 320 km/h is reached.

Changes to the engine electronics coaxed an additional 26 kW from the ten-cylinder, which now produces 412 kW from a displacement of 5,204 cc. The torque curve peaks at 540 Nm at 6,500 rpm, 10 Nm more than in the production version. The V10 has a specific power output of 79.2 kW per litre of displacement. Its power-to-weight ratio is 3.70 kilograms per kW or 2.72 kilograms per hp. The engine redlines at 8,700 rpm.

The long-stroke engine (bore x stroke 84.5 x 92.8 millimetres), which is hand-built at the factory in Györ, Hungary, features a crankcase made of a aluminium-silicon alloy that is both lightweight and very strong. A bedplate - a frame for the crankshaft bearing bridges - further enhances its rigidity. The complete engine weighs only 258 kilograms. It is characterised by a cylinder angle of 90 degrees and dry-sump lubrication, which uses a highly efficient oil pump module. Both solutions lower the centre of gravity and thus improve driving dynamics.

The crankshaft is designed as a common pin shaft. The connecting rods of the opposing pistons engage a common crankpin, resulting in alternating firing intervals of 54 and 90 degrees. This unique rhythm gives the V10 its fascinating sound - a grand, technical music very much like that in racing. Two flaps in the exhaust system modulate its volume and tone as a function of load and engine speed.

The normally aspirated engine consumes an average of 13.7 litres of fuel per 100 km- very good fuel economy given the tremendous power. The FSI petrol direct injection system injects the fuel into the combustion chambers at up to 120 bar of pressure. The turbulent mixture cools the cylinder walls, enabling a compression ratio of 12.5:1. A variable intake manifold and the continuous adjustment of the chain-driven camshafts ensure that the combustion chambers are fully filled. Flaps in the intake ports facilitate the formation of the mixture by inducing a tumbling motion in the inflowing air.

The drivetrain: uncompromising traction and control

Gear changes in the R8 GT are handled by the R tronic sequential manual transmission. The electrohydraulic clutch and switching unit receive their commands electronically. It changes its six gears much faster than a skilled driver could - within a tenth of a second at high load and engine speed.

The electronic management system offers an automatic mode with the Sport and Normal characteristics, and two manual levels. It is controlled using the short gear selector lever on the centre tunnel and two paddles on the steering wheel. Maximum thrust when starting is ensured by Launch Control - a program that manages full acceleration with high engine speed and minimum wheel slip when starting.

Quattro permanent all-wheel drive is the ideal technology for a high-performance sports car. The central viscous coupling located at the front differential sends 15 percent of the power to the front axle and 85 percent to the rear axle during normal driving. This split harmonizes perfectly with the Audi R8 GT's 43:57 percent weight distribution. The coupling sends as much as 30 percent of the power to the front wheels within milliseconds, if necessary. A mechanical locking differential at the rear axle further improves traction. It provides up to 25 percent lockup when accelerating and up to 40 percent on the overrun.

Chassis even tauter and more precise

The Audi R8 GT high-performance sports car is a driving machine with breathtaking lateral acceleration and lightning-fast, nearly instantaneous reactions. Its engine is mid-mounted close to the vertical axis; its mass is almost negligible during fast direction changes. The R8 GT is dynamic, precise and stable in every situation.

The chassis follows the classic racing design - double wishbones made of aluminium locate the wheels. The hydraulic, power-assisted rack-and-pinion steering has a direct 16.3:1 ratio and connects the driver closely and precisely with the road. A manually adjustable coil-over suspension, which lowers the body by as much as 10 millimetres, is standard. Higher front and rear wheel camber rates make the handling a tick more agile than with the standard model.

The 19-inch forged wheels are 8.5 J x 19 up front and 11 J x 19 at the rear, and are shod with size 235/35 and 295/30 tires, respectively. Audi will mount 305/30 tires together with optional wheels on the rear axle upon request. Cup tires, which offer the ultimate in performance on dry roads, are available for racing enthusiasts.

The ESP stabilisation program has been specially tuned to the R8 GT and can be switched into a Sport mode at the push of a button to allow spectacular, but safe, oversteer when accelerating out of a corner. The driver can deactivate the system entirely for a trip to the race track.

Exclusive and dynamic: interior and equipment

At Audi, reducing weight means increasing performance and efficiency, but not sacrifice. The Audi R8 GT comes with an automatic climate control system and power windows, a navigation system with MMI operating logic and a powerful sound system. A 465 watt, ten-channel Bang & Olufsen sound system, a CD changer and the Audi Music Interface are available as options. As always with Audi, the interior shows loving attention to detail. Rich materials spoil the occupants with a fine look and feel.

The ergonomic interior is adorned in sporty black and dark grey. The steering wheel, the headliner, the roof posts, the knee pad, the parking brake lever and the bucket seats are covered with Alcantara accented with contrasting stitching. A synthetic sharkskin-look material that feels slightly rough to the touch is applied to the bulkhead, the door liners, the instrument cowl and the dashboard. The 'monoposto' - the arch in the cockpit - is made of matt carbon.

The instrument cluster features white dials with 'R8 GT' badges. The newly designed selector lever is made of CFRP and aluminium; the centre tunnel and the door liners sport decorative inlays in the body colour. The door sills feature trims of matt aluminium decorated with the 'R8 GT' logo.

A number of exclusive features are available as options for the R8 GT. Exterior options include two alternative wheels, a body-colour front splitter and a CFRP engine compartment lining. Carbon elements on the doors, the tunnel, in the cockpit and on the instrument panel are available as interior options. Others include a multifunction leather steering wheel, seat belts in red, orange or grey, floor mats with the 'R8 GT' logo and CFRP door sill trims illuminated in red. If desired, Audi will fit seats with carbon frames, which are somewhat lighter than the CFRP shells. The Alcantara seat covers are optionally available with an embroidered 'R8 GT' logo.

A race package is available for racing enthusiasts. It includes a bolt-in roll bar in red or black, which has both road and type approval, as well as road-approved four-point belts in red or black, a fire extinguisher and a kill switch for the battery. An optional front bar module for motorsports evens includes a rotary lock for the four-point seatbelt and turns the roll bar into a full cage. Buyers looking for more comfort and convenience can choose cell phone preparation with an innovative belt microphone. Audi also offers a full leather package, control elements in leather with contrasting stitching and a cruise control system as options. The parking aid is included with the standard equipment. 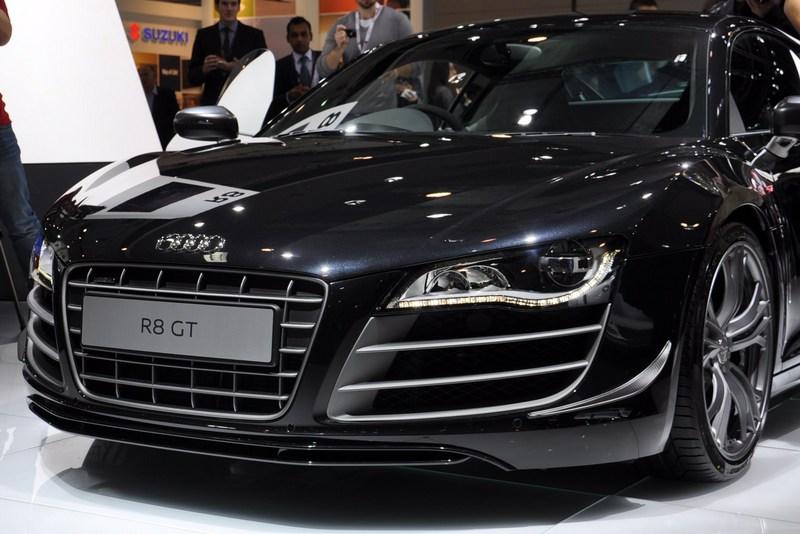 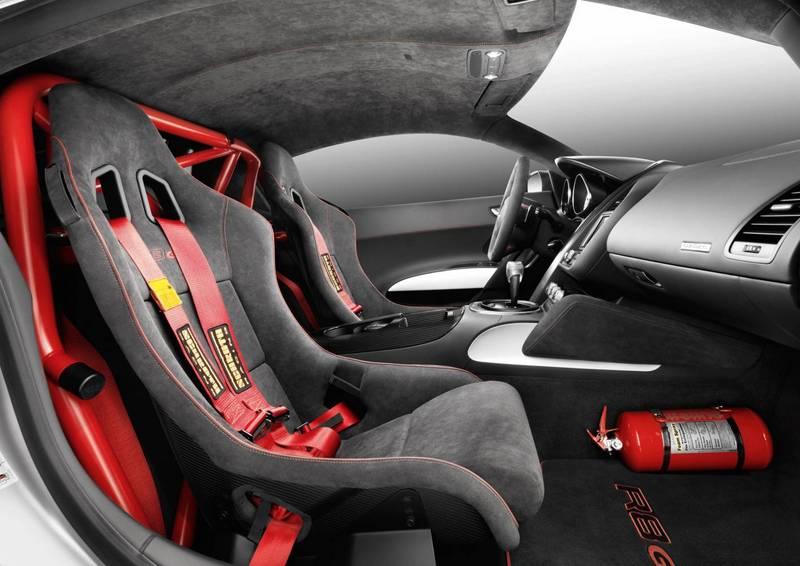 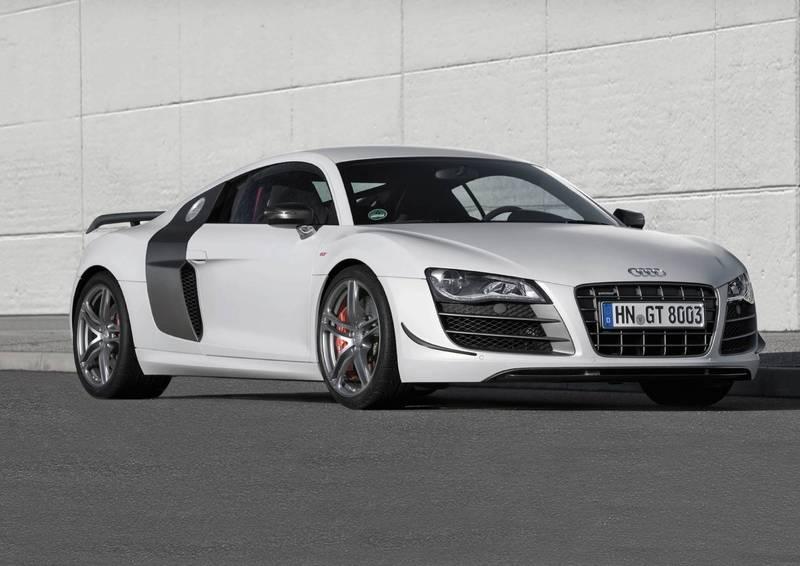 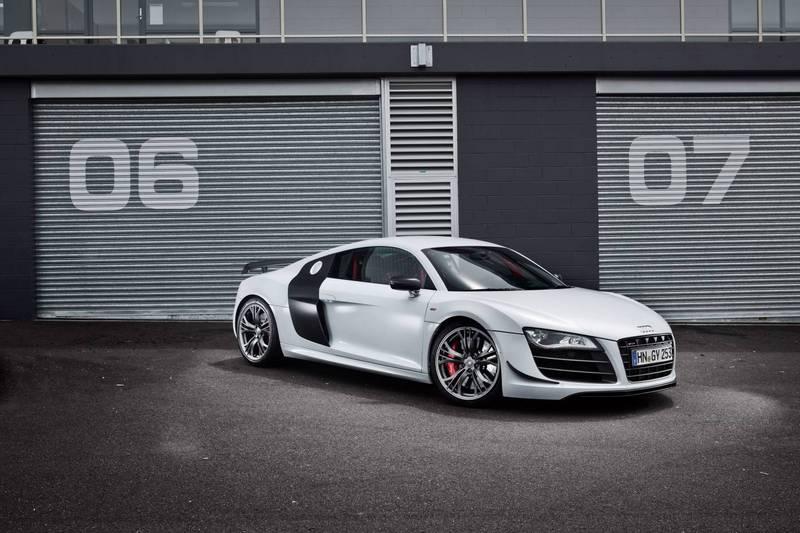 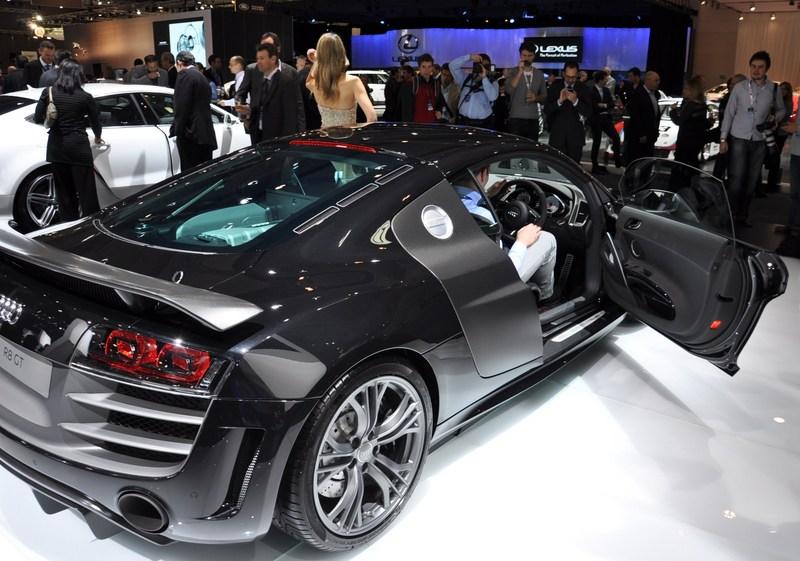 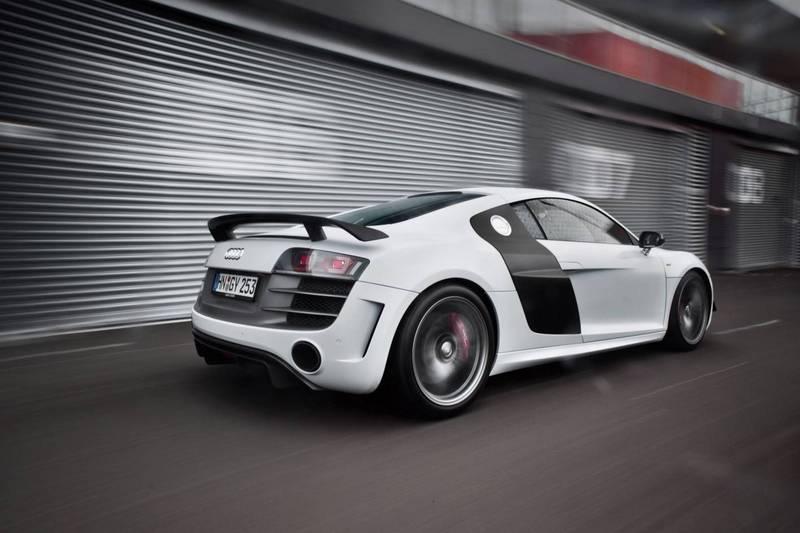 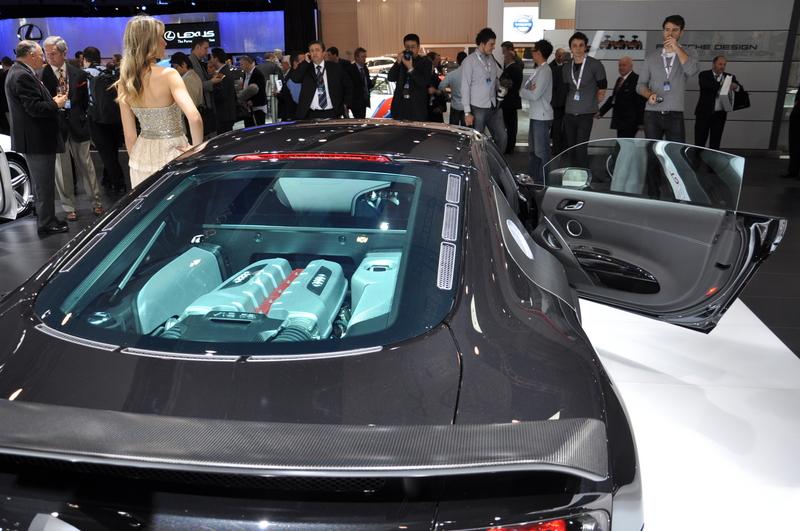 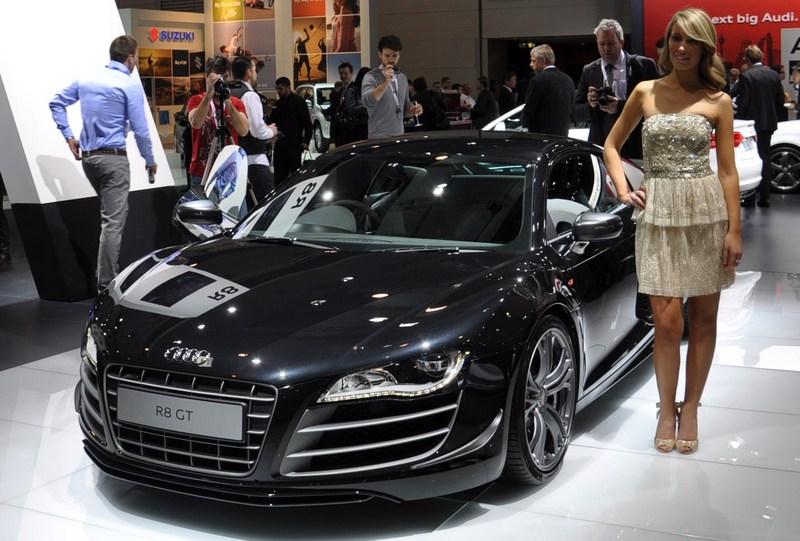