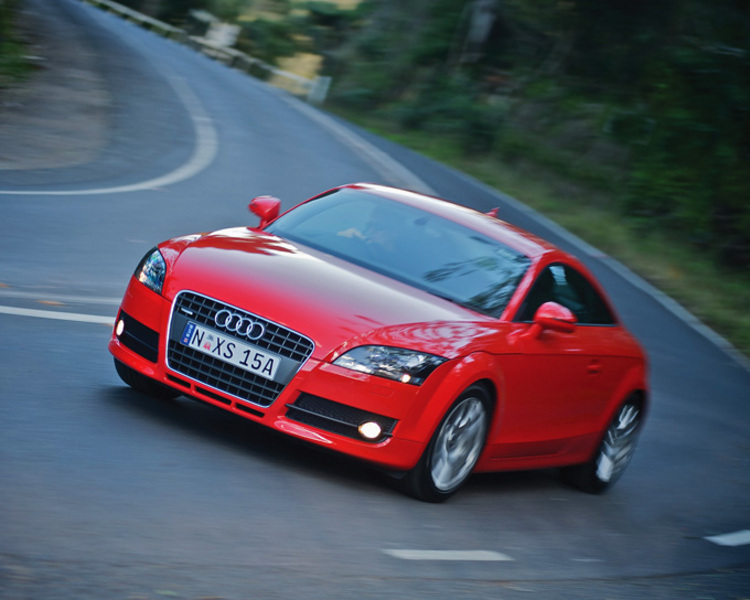 It's not too many years ago that the terms "turbo-diesel" and "sports car" were mutually exclusive. Not any more. Back in December 2005 Audi unveiled its V12 TDI turbo-diesel powered R10 sports racing car and in March 2006 the car won the Sebring 12-hour race in the United States and followed that in June by becoming the first diesel powered car to win the 24-hour Le Mans classic. World sports car racing was changed forever.

Audi won Le Mans again in 2007 and 2008 but it was beaten this year by Peugeot's 908 HDi-FAP - also a turbo-diesel. Actually the history of turbo-diesels at Le Mans goes back 60 years. In 1949 the French Delettrez brothers ran an "oiler" in the great race but it did not finish. They tried again the following year with the same result. Armed with its new found turbo-diesel sports car credentials, booming German brand Audi has now released the world's first series-production sports car - the TT turbo-diesel quattro. While Audi has long boasted one of the world's finest families of turbo-diesel cars, until now they included only SUVs and sedans and hatches. BMW has also come up with a remarkable new turbo-diesel powered car - the 330d - and it is nothing short of a sports sedan. More about that later.

Currently in Australia Audi has no fewer than 21 turbo-diesel models that can deliver a combined fuel consumption figure of less than 7.0-litres/100km. This compares with BMW's eight and Mercedes-Benz's seven. Audi buyers are increasingly embracing turbo-diesel motoring and it's worth noting that TDI sales account for a remarkable 97 percent of the A8, 93 percent of the Q7 SUV, 53 percent of the Q5 SUV and 41 percent for both the A5 and A6. The new TT turbo-diesel quattro coupe with its two-litre TDI engine that delivers peak power of 125kW at 4200rpm and an impressive 350Nm of torque that is on tap from 1750rpm to 2500rpm. The only transmission is a six-speed manual gearbox and Audi is not offering its great S-tronic double-clutch unit, saying it believes a manual transmission is the way to go for the TT oiler.

With a combined fuel consumption figure of 5.3-litres/100km it is the second most fuel efficient Audi in the Australian model line-up after the 1.9-litre TDI A3 hatch. This fuel consumption figure means the TT can cruise more than 1100km on a tank of distillate. In terms of the TT oiler's performance, it can sprint to 100km/h in a handy 7.5 seconds and reach a top speed of 226km/h. Audi claims a CO2 emissions figure of 139g/km.

Audi Australia marketing boss Immo Buschmann says the new diesel TT will appeal to people who like the emotion and excitement of a sports car but do a lot of driving and appreciate fuel efficiency.

"They'll also be intelligent drivers and this will be a good thing because they will have to answer a lot of questions from people who want to know why they'd buy a diesel sports car," he added.

If more ammunition is needed to win the argument, the TT TDI quattro's fuel efficiency means it is completely exempt from luxury car tax - a nice additional bonus that gives the car a value for money, GST inclusive price tag of $70,900 (excluding dealer delivery and statutory charges). The car's new generation super efficient engine runs two camshafts and its new common rail injection system uses one of the world's most advanced control units. The system's eight hole piezo injectors can achieve up to five separate injection processes per combustion cycle and the single piston high pressure pump develops a system pressure of 1800bar. One of the keys to the engine's lag free torque delivery is that its turbocharger has adjustable vanes and a special damper that reduces vibration. There is also a surprising - for a turbo-diesel engine - exhaust note that helps the new TT oiler establish its sports car credentials.

As well as the efficiency of its turbo-diesel engine, one of the other secrets to the new TT's economy is its sylph-like 1370kg weight - a figure that has been achieved through the use of lightweight aluminium for its forward structure and this combined with a steel rear section helps give the car its near perfect weight distribution and balance. Interestingly the car's body shell weighs just 206kg.

The TT's quattro permanent all-wheel drive system works with the slick six-speed manual transmission and a hydraulic multi-plate clutch can in the blink of an eye redirect power as needed from the front to the rear wheels. The beautifully weighted steering has electro-mechanical assistance and elaborate four link rear suspension, is a highly complex structure and guarantees a comfortable ride and sure footed handling. The TT rides at the front on MacPherson layout and there is an innovative four link rear set up and the slinky 4178mm long car has a drag coefficient of an aerodynamic 0.30.

Stopping power comes from 312mm ventilated discs at the front and 286mm solid discs at the rear and the car's electronic stability program is optimised for dynamic driving. At lower speeds a brief press of a button will increase wheel slip while a longer press gives the driver a second, sporty operating mode in which the ESP permits controlled side slip angles. To complete the more sporty process, the brakes also intervene later than normal and engine manipulation is suppressed.

Audi continues to do just about the best interiors in the world of motoring and the TT continues the tradition. The deep set, height adjustable sport seats deliver outstanding support, and with the rear seat backs folded down the luggage space rises from 290-litres to 700-litres. While the TT is a four seater, with a couple of tall front seat passengers on board and the seats right back there is precious little rear seat legroom. That said, this is a car that will be bought for the people in the front seats and more particularly for the driver.

Options include the $3,178 magnetic ride suspension package and a $4,450 navigation/ information/entertainment system. Also taking the reputation of the turbo-diesel engine to new heights is the just released BMW 330d sedan. Its all new three-litre six-cylinder turbo-diesel engine first saw the light of day under the bonnet of the flagship 7-series sedan.

The engine delivers 180kW of peak power at 4000rpm and a thumping 520Nm of torque that is on tap from way down at 1750rpm. Even the barn storming V8 powered M3 with its 400Nm of torque doesn't come close to the new oiler's figure, and the other impressive fact is that the new 330d's 6.8-litre/100km combined fuel consumption figure is also lower than the two-litre four-cylinder petrol powered 320i can manage.

The super-smooth and refined all aluminium engine is mated with a six-speed automatic transmission that allows the driver the choice of sequential sports shifting via the console mounted shifter or the somewhat fiddly steering wheel mounted paddles. The 330d is nothing short of a super frugal sports sedan and before you snigger at my calling it a sports sedan, how's a 6.2-second sprint time to 100km/h sound? To put that figure into perspective it is worth noting that the legendary Ford Falcon GTHO Phase III with its whopping V8 petrol engine could manage just 6.5 seconds. The 330d's top speed is an electronically governed 250km/h and its CO2 emissions figure is 180 g/km.

BMW's marketing boss Tom Noble says BMW continues to roll out the fruits of its Efficient Dynamics engine program that brings the triple benefits of high performance, low consumption and low emissions.
"The new BMW 330d Sedan gives our customers the opportunity to mix V8 engine performance with four-cylinder fuel economy, but at the same time delivering the tangible delights of our highly acclaimed straight six cylinder engines," he said. While the new 330d's logical rivals are its Mercedes and Audi counterparts, BMW acknowledges that its 335i petrol powered sibling can also give the new turbo-diesel a run for its money in the sales stakes.

If you want a really serious sports sedan, the twin-turbo 335i takes the cake with a 5.6-second sprint time to 100km/h, but if fuel economy rather than raw acceleration is your thing, the 6.8-litre/100km combined consumption figure for the 330d clearly outpoints the 335i's 9.6-litres. According to Tom Noble, the arrival of the 330d could set up an internal family battle for the hearts and minds of six-cylinder 3-series buyers.
"For us it's like a parent who can't, and shouldn't, choose a favourite," he said.

With a price tag around $20,000 more for the 335i, the 330d's $87,250 will certainly help some buyers make a decision in favour of the new oiler. Because of its less than 7.0-litres/100 combined fuel consumption figure, the car attracts significantly less luxury car tax - another serious plus in the purchasing equation.

Endowed with the most impressive standard kit inventory ever seen on an Australian spec 3-series model, the new 330d boasts 17-inch light-alloy wheels shod with 225/45 R 17 tyres at the front and 255/40 R 17s at the rear and vented single-piston floating caliper disc brakes with 348mm rotors at the front and 336mm units at the rear. Also standard is leather upholstery, a top-line satellite navigation system, bi-xenon adaptive headlights, a 10-speaker HiFi loudspeaker system and BMW's so-called "comfort access" system that allows drivers to unlock and start the car without taking the key out of their pocket.

The electrically adjustable front seats and exterior mirrors have a memory function that is linked to the personal settings of both customer keys. The seats also give the two occupants the added comfort and security of electrically adjustable lumbar support and the 60/40-split rear seats have a through-loading system and car comes with an integrated ski bag. There is also a standard leather wrapped sports steering wheel, cruise control with a brake function and high beam assist, front and rear parking sensors, Bluetooth mobile phone preparation, a USB audio interface and AUX-In connection.

In the electronic driver aids and safety department, 330d buyers can look forward to ABS brakes with electronic brake assist, electronic brake-force distribution and cornering brake control, dynamic traction control and a dynamic stability control system that adds functions such as dry braking, start-off assistant, brake fade compensation and soft-stop. There are active front head restraints and six airbags, and for added safety the car comes with a warning triangle and first-aid kit.

During the media launch drive program we sampled both the 330d with the standard suspension set-up and another with the optional $4,200 M Sport suspension package that firms things up and enhances the already impressive handling characteristics. Even without the M Sport package, the standard 330d delivers outstanding cornering performance and the result is a real driver's car and the amazing lag free torque delivery makes overtaking a breeze and hills are treated with disdain. Cruising on the freeway at 110km/h the car's variable geometry turbocharger equipped straight six diesel engine is totally relaxed at less than 2000rpm but tread on the accelerator and instantly it surges into life. The new 330d is a seriously impressive addition to BMW's huge Australian model line-up if you remain skeptical about diesel-powered cars, this one - and the Audi TT TDI quattro - will change your mind forever. 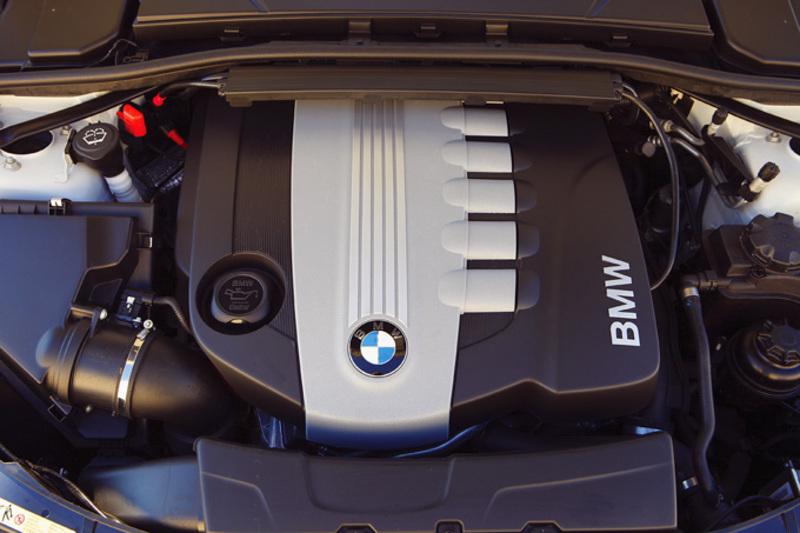 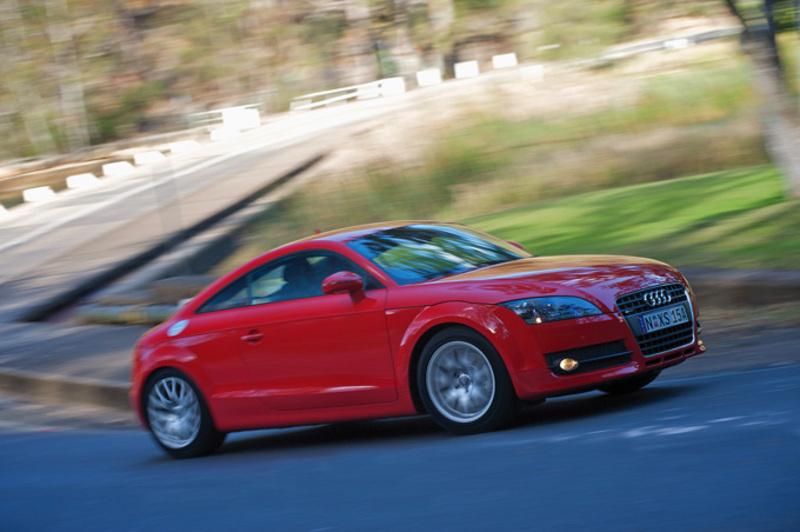 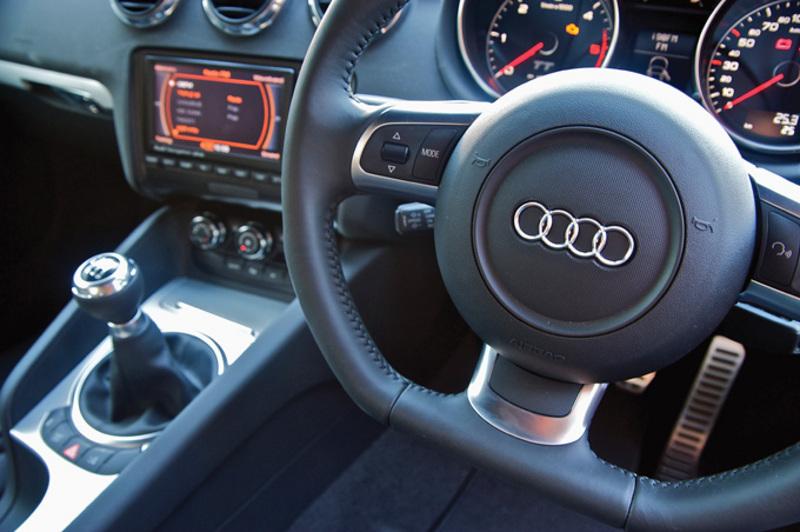 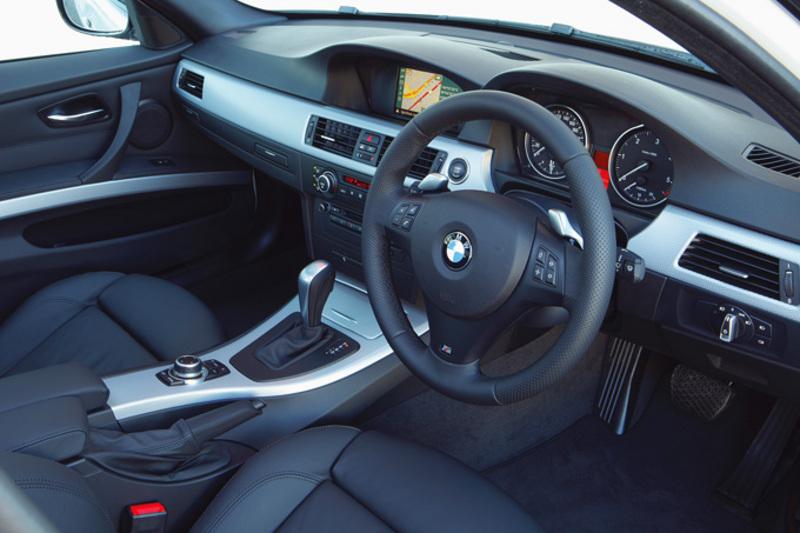 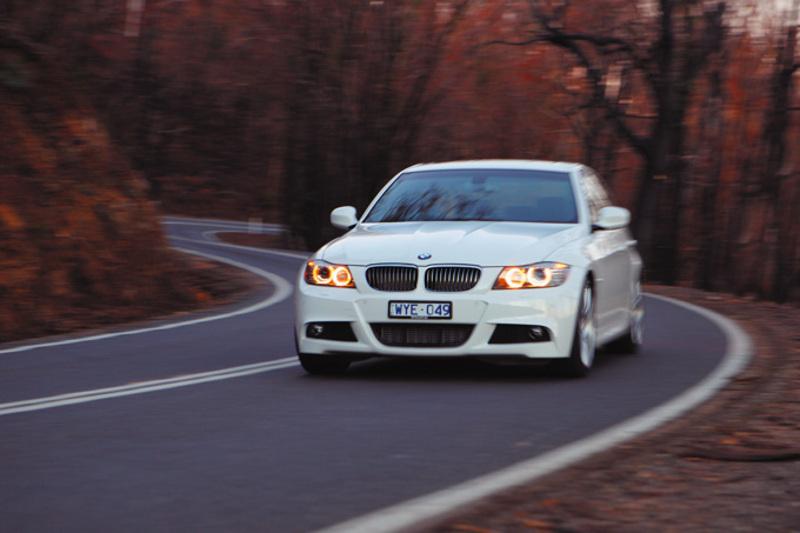 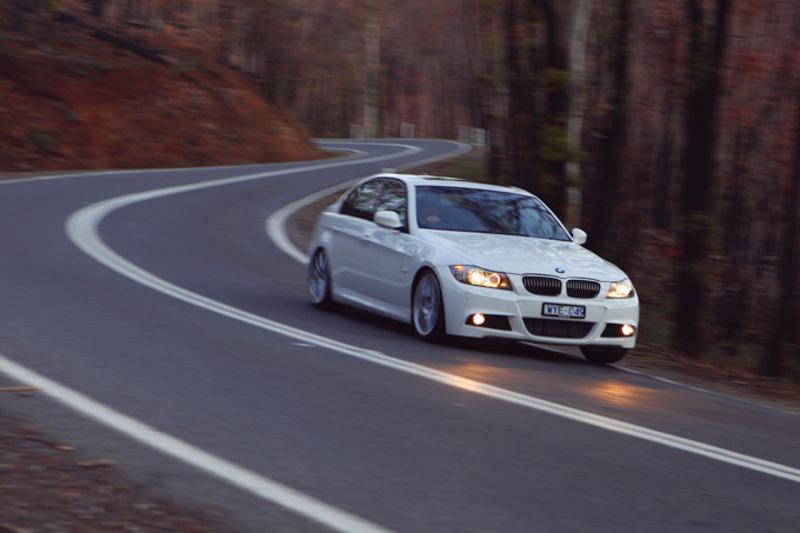 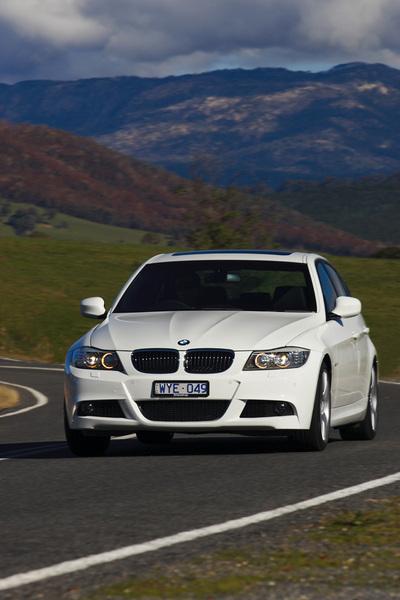 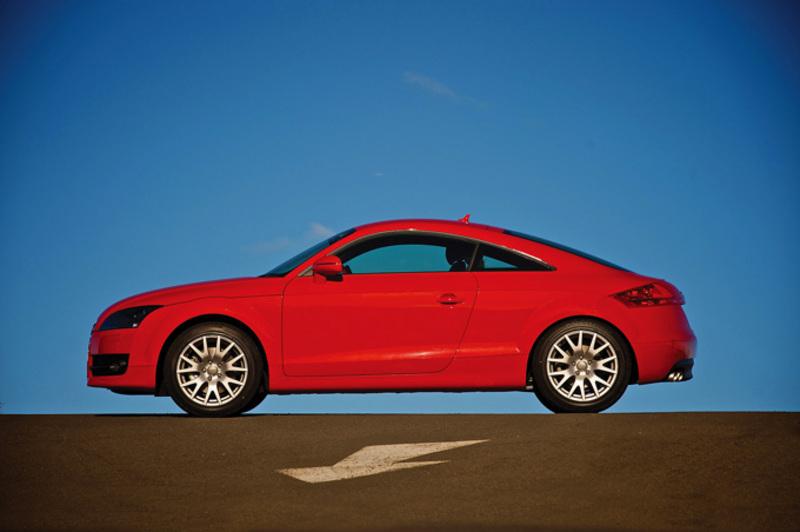 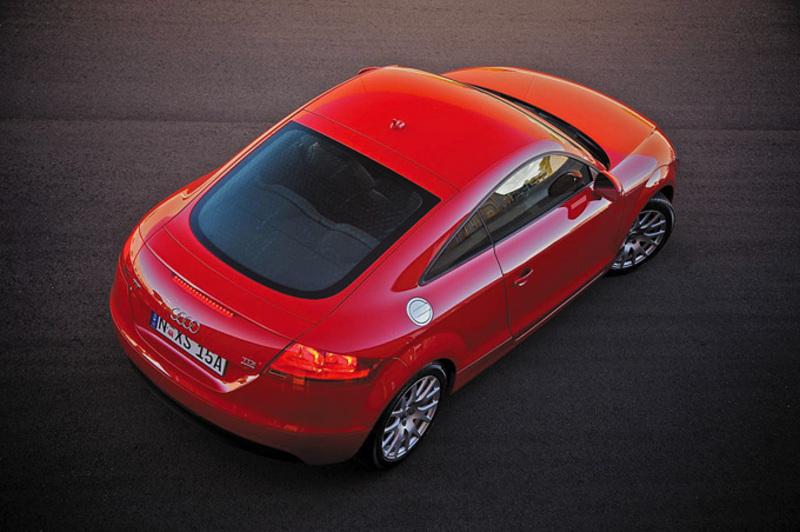 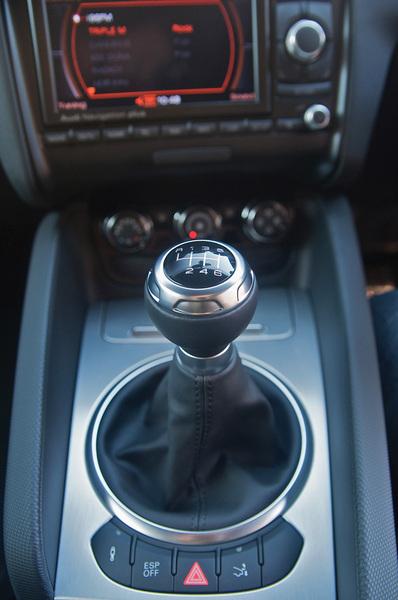