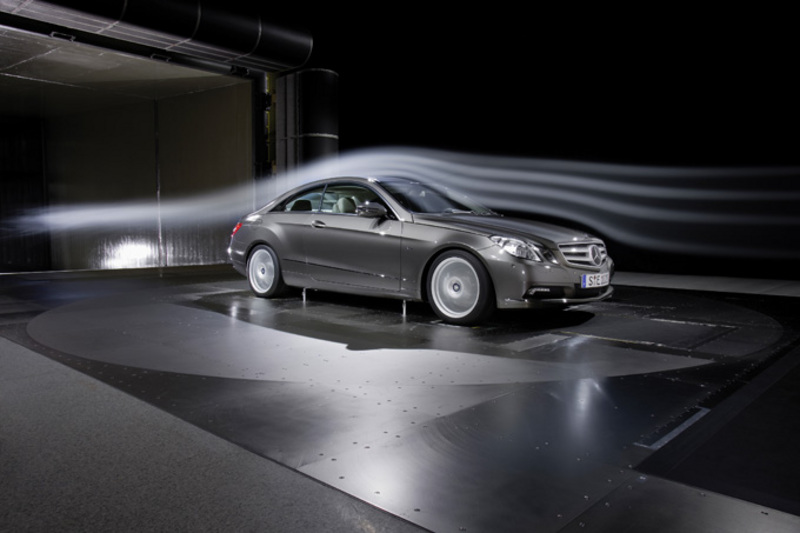 The classy new E-class sedan and coupe were launched back in July in naturally aspirated petrol V6 and V8 guises but now the turbocharged petrol and diesel four-cylinder engines and the turbo-diesel V6 have joined the model line-up. The E-class has for decades been one of the great German brand's most important vehicles and while a few years back the model lost its way somewhat in terms of styling and build quality, that has been laid to rest with the new ninth-generation range.

In the 60 years since it first saw the light of day, around 10 million E-class cars have been sold around the world and of these more than 1.3 million units of the outgoing model were sold. Blue Efficiency is Benz's moniker for a technology program that cuts fuel consumption via a range of measures such as aerodynamics, direct fuel injection, turbocharging, smaller engine displacements, radiator grille louvers and on demand power steering and fuel pumps.

Everything from the powerplants to the wheels has been optimised to cut emissions and lower fuel consumption, and Mercedes designers have been able to endow the E-class coupe with a drag co-efficient of 0.24 - the best figure every achieved for a production car - and at 0.25, the E-class sedan is nearly as good. The $80,900 125kW/400Nm turbo-diesel powered E 220 CDI opens the Blue Efficiency batting and as well as delivering more torque than the BMW 520d and Audi's A4 2.0 TDI and A6 2.7 TDI, it boasts a combined fuel consumption figure of 5.9-litres/ 100km. Priced from $96,900, the 150kW/500Nm E 250 CDI shares the same 5.9-litre consumption figure and this remarkable engine has the highest torque figure of any four-cylinder diesel passenger car.

To put that in perspective, it matches Audi's A6 3.0-litre V6 TDI and is just shy of the 520Nm cranked out by the BMW 530d that is nearly a litre bigger in capacity and running two more cylinders. Topping the E-class Benz pecking order is the 170kW/ 540Nm E 350 CDI and it's priced from $131,900. Again, it has a beefier torque figure than its key German rivals. If turbo-diesels are not your "thing", the 150kW/310Nm E 250 CGI Benz kicks the petrol powered range off with pricing starting at $93,900.

Benz claims a combined fuel consumption figure of 7.6-litres/ 100km and the engine boasts a hefty 35 percent more torque than the BMW 523i and nearly as much as the six-cylinder, 315Nm 530i. The daddy of the petrol engines in the non AMG line-up is the 5.5-litre V8. It delivers 285kW of peak power at 6000rpm and 530Nm of torque that arrives at 2800rpm and is on tap until 4800rpm. Benz claims a fuel figure of 11.0-litres and 258g/km emissions rating. The other good thing about the new E-class cars is that Benz engineers now reckon they don't have to be serviced so often as their predecessors and the service intervals have been extended out to 25,000 kms. This means that over the average ownership period of a new E-class, the car will need three not five services. Work on the new E-class range began back in 2005 and since then engineers have put the cars through a testing and development program covering 34 million kilometres.

As well as this, the car under- went 150 in-house crash tests and no fewer than 17,000 simulated crash tests before it went into production with a 30 percent increase in body rigidity and a body shell and steel alloy structures designed to channel accident impact forces. At 4868mm in length, the new E-class sedan is 16mm longer than its predecessor and its new 1854mm width and 1464mm height make it 10mm and 32mm wider and lower respectively. At 2874mm, the wheelbase is 20mm longer, the front track has grown by 23mm and the rear track by 49mm. A better designed 540-litre capacity boot now means that it can accommodate four golf bags.

Like the sedan, the slinky new E-class coupe is the result of a vast amount of testing and development work over the past four years. In fact a total of 1400 development prototype and pre-production vehicles were involved in the program. Also like the sedan, the pricing of the new four-model range represents a compelling value for money story and the cars come with a raft of high tech safety technologies. The coupe line-up kicks off with the petrol powered E 250 CGI Blue efficiency at $94,500 and it rises to $97,500 for the E 250 CDI Blue Efficiency turbo-diesel, to $127,500 for the V6 petrol powered E 350 and the range topping E 500 is $174,500.

To put the new pricing into perspective, the E 350 is $2,414 dearer than the outgoing CLK 350 Elegance and the E 500 out strips the outgoing CLK 500's pricing by a whole $18,695. In justification of the new pricing, Mercedes points out that the E 350 comes with more than $9,500 in extra goodies and for the additional money, E 500 buyers will receive $28,000 of additional standard kit. This extra standard fitment includes variable ratio steering, a reversing camera, 18-inch alloy wheels, intelligent bi-xenon head lights and nine airbags.

Things the CLK 500 didn't have but are now found on the E 500 include an AMG body kit, keyless entry/start, a panoramic sunroof, an alarm system and a premium Harman Kardon audio system. Being behind the wheel of both the sedan and coupe versions is an exercise in refinement and luxury. Quality fit and finish abounds and sumptuous leather clad seats are inviting as well as supportive and you can even specify the optional multi contour seats that have inflatable air chambers in the front-seat cushions as well as in the centre and side bolsters of the back rests. Coupe buyers can also make their car a four-seater rather than a five-seater by specifying two individual rear-seats rather than a three seat bench configuration.

In summary, there's no doubt that Mercedes-Benz has got the E-class sedan and coupe back on track in terms of styling, build quality, refinement, aerodynamics, fuel efficiency and value for money.


Diesel engines in Mercedes passenger cars: From the world's first diesel car to the C 250 CDI Blue EFFICIENCY
The diesel engine has been regarded as the epitome of durability for many decades: staunch and reliable of course, but also associated with a touch of sluggishness. "Brisk progress" was the term used to circumscribe this lack of dynamism in brochures from the 1970s. Over time, this characteristic has completely disappeared, making way for a totally new image. Sportiness, agility, ride comfort, driving pleasure and, not least, environmental compatibility are attributes to which modern diesel engines can nowadays lay claim. Engineers at Mercedes-Benz have been actively contributing to this progress for more than 70 years:

1961: In the "Tailfin" design (W 110-series) the diesel car emancipated itself even further from its commercial vehicle origins: the two-litre diesel introduced in 1961 was still called the 190 D, but when Mercedes-Benz presented the new model 200 in 1965, the diesel variant was also renamed the 200 D. Overall displacement and output (44kW at 4200 rpm) remained unchanged.

1977: At the 1977 International Motor Show (IAA), a further diesel model specifically designed by Mercedes-Benz for the American market attracted great attention: the 300 SD was the first S-Class (W 116-series) and the very first luxury class model anywhere to be equipped with a diesel engine. An appropriate performance for the luxury saloon was ensured by a turbocharger, which increased the output of the five-cylinder diesel to 85kW.

1983: In 1982 Daimler-Benz introduced the compact class as its third car model series. In 1983 the compact Mercedes known as the 190 D was given a new 2-litre diesel engine (53kW at 4600 rpm). This unit was designed to be particularly light, economical and responsive. Above all though, the engine was fully encapsulated to reduce noise by one half.

1993: From autumn 1992 the S-Class (W 140-series) powered by a 3.5-litre turbodiesel also became available in Europe: the diesel engine had finally established itself internationally in the automotive luxury segment. This model delivered 110kW, with a turbocharger and emission control system using an oxidising catalytic converter included in the standard equipment.

Four-valve technology was introduced by Mercedes-Benz as a world first. Using four instead of two valves per cylinder made it possible to achieve a higher torque and output over a considerably wider engine speed range, while also reducing fuel consumption under full load by up to eight percent.

1995: The E 290 Turbodiesel in the E-Class with the new twin headlamp face attracted great attention. For the first time in a Mercedes-Benz, its OM 602 DE 29 LA in-line five-cylinder engine offered a combination of diesel technology and direct injection.

2000: Easily the most powerful diesel engine in a Mercedes-Benz car was introduced into the S-Class in 2000. The light-alloy OM 628 DE 40 LA V8-engine generated 184kW at 4000 rpm from a displacement of four litres.

2003: As the first manufacturer in the world, the company introduced diesel cars complying with the Euro 4 standard, with a maintenance-free particulate filter.

Mercedes-Benz equipped all its diesel passenger cars from the A to the S Class with a diesel particulate filter as standard in Germany, Austria, the Netherlands and Switzerland.

A new generation of four-cylinder diesel engines celebrated its debut in the C 250 CDI BlueEFFICIENCY. Features: two-stage turbocharging and fourth-generation common rail technology with a rail pressure of 2000 bar, as well as a new piezo electric injector design with direct nozzle needle control.