While not the best example of a postwar Buick Roadmaster, this one is officially the most valuable thanks to a Hollywood connection.

Photos: Copyright and Courtesy of Bonhams

How much does a “celebrity connection” count for when it comes to the value of a classic car? Recent evidence would suggest it counts for a lot, with VW Beetles from the ‘Herbie’ movies, a Porsche 928 from ‘Risky Business’ and just about any car that had screen time in the ‘Fast & Furious’ franchise selling for over the estimate thanks to their movie appearances. Earlier this year, a solid but slightly shabby Buick Roadmaster continued the trend. 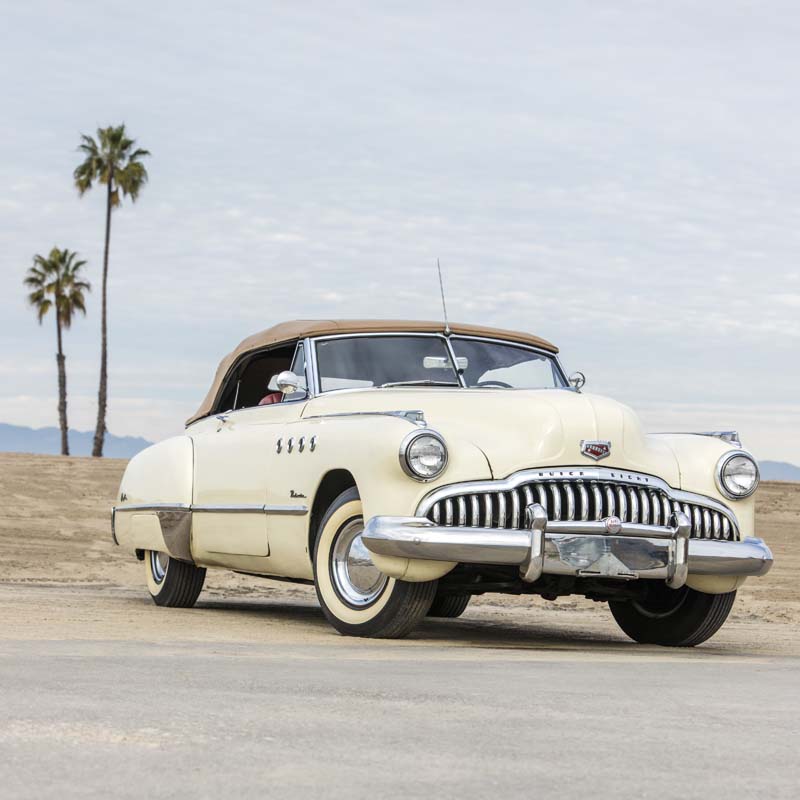 For a decade, the Roadmaster model was the flagship in Buick’s range, but it wasn’t always that way.

The ‘Roadmaster’ name first appeared in 1936, when all Buicks gained names instead of nondescript Series designation (Series 60, Series 80, Series 90, etc). The Roadmaster was applied to the Series 80, which had returned for 1936 after an absence of two years.

Sitting above the Special (Series 40) and Century (Series 60), the new Roadmaster was under the Limited (Series 90) in Buick’s hierarchy. While the body styles, along with paint, trim and standard appointments varied across the four offerings, the main difference was wheelbase length, with the Roadmaster rolling on a 131-inch wheelbase that was longer than the Century and Special, but shorter than the Limited.

The other change of note for 1936 was the rationalisation of Buick’s engine offerings, from four different straight eights down to two, with the Century, Roadmaster and Limited receiving the larger 320.2 cubic inch version, while the Special ran with a 233ci eight that had been introduced the previous year.

The pattern set by the 1936 lineup continued with a few changes, including the addition of a ‘Super’ model, until the US automotive industry shut down for war production in 1942. At the end of hostilities, only the Special, Super and Roadmaster returned to Buick's lineup, with the latter now the range leader following the discontinuation of the Limited.

As Buick had introduced new styling for 1942, they had newer product compared to most of their opposition post-war, so styling was barely changed for the next two years.

For 1949, Buick introduced new body styling, which curiously, was applied to the Super and Roadmaster only, with the Special retaining the old body style for almost another year.

In terms of the Roadmaster, the new styling featured a “fuselage” body that did away with the sweep of the front guards to a bulge over the rear wheels. The grille still had the distinctive thick vertical bars, but the surround had a two-tier arrangement, with ‘BUICK EIGHT’ identification in the upper segment, while ‘Road Master’ identification appeared on a pushbar linking the two bumper overriders.

The most distinctive feature on the 1949 Buicks, though, were the small, porthole-style openings in the front guards. Known as ‘VentiPorts’, these chrome-trimmed holes were the creation of Buick designer, Ned Nickles.

Self-taught in the art of car design, Nickles had served under GM’s styling godfather, Harley Earl, before rising to become Buick’s Head of Styling in 1947. The ‘gunsight’ (also referred to as ‘bombsight’) bonnet ornament that was inspired by the pre-war Buick ‘Y-Job’ concept car and debuted on the 1946 Buicks was also Nickles's work and he had a hand in styling Buick’s first pillarless hardtop – the Riviera – that debuted in 1949.

For the VentiPorts, Nickles was inspired by the flame-spitting exhausts of World War II fighter aircraft, customising his personal 1948 Roadmaster convertible with a set of four holes drilled into each of the front guards. To add to the effect, lights in each hole were wired to the distributor to illuminate in time with the engine’s firing order. It was a gimmick, but one that attracted a lot of attention, including from Buick’s Manager, Harlow Curtice, who insisted they be added to the Buick lineup for 1949 – sans the lights. 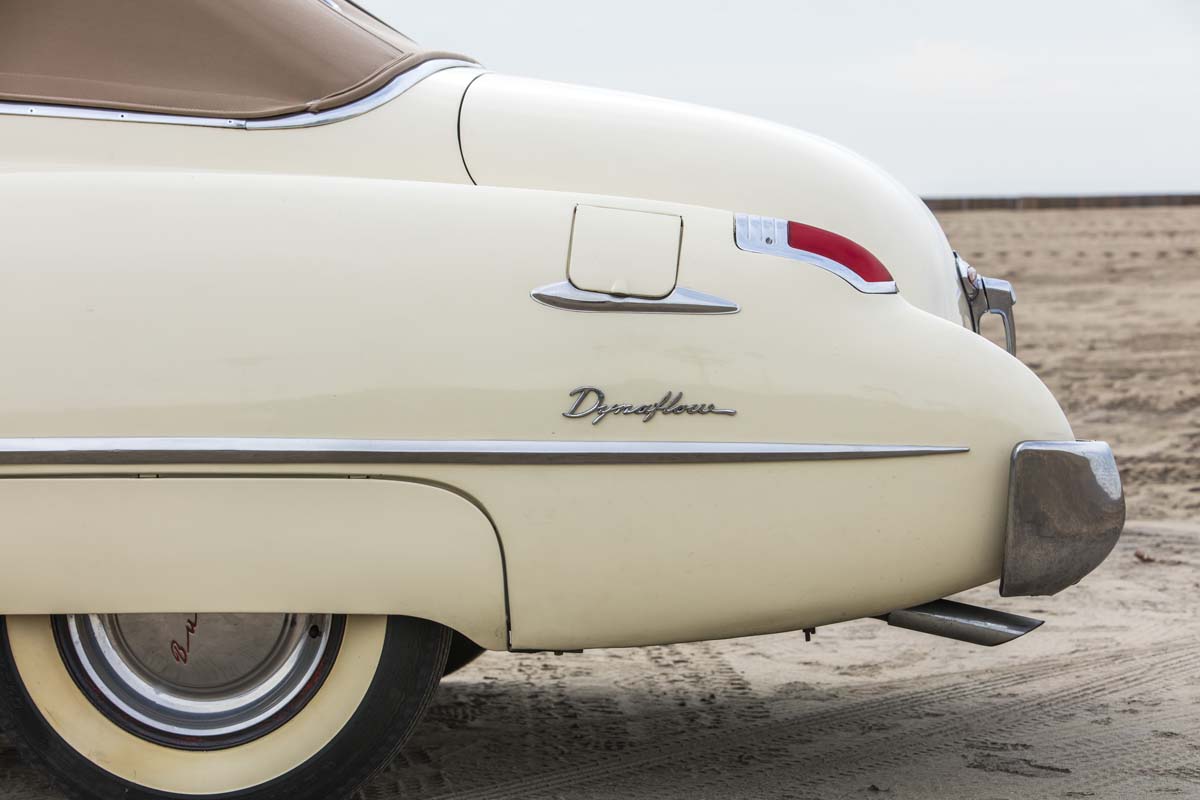 For their debut year, the VentiPorts were actual holes, which Buick claimed help extract heat from the engine bay. Four holes featured on each side of the Roadmaster, with three per side on the Super and Special, making for easy identification of Buick models throughout the 1950s.

Although they were only “functional” for 1949 (replaced with riveted badges from 1950), the VentiPorts would go on to be a signature Buick styling feature until the mid-1960s and appear off-and-on even up to the 1980s.

The other point of note on the 1949 Roadmaster was the adoption of Buick’s Dynaflow torque-convertor automatic transmission as standard. Introduced as an option for 1948 and exclusive to the Roadmaster, the take-up rate was staggering, leading to Dynaflow being standardised on the Roadmaster for 1949 and offered as an option on other Buick models that year. By 1950, around 85 per cent of all new Buicks were fitted with a Dynaflow automatic from the factory.

In the case of the 1949 Roadmaster, the two-speed Dynaflow auto backed onto the same 320.2ci ‘Fireball’ straight eight that had been with the Roadmaster since it debuted in 1936. For 1949, this engine's rated output of 150hp (112kW) was higher than the original, thanks to changes in compression and carburation.

Inside a '49 Roadmaster, its premium pricing of US$2,735 for a sedan and US$3,150 for a convertible was reflected in standard features like a heater/defroster, radio and hydraulic adjustment for the front bench seat and window mechanisms. On convertibles, the top as hydraulically operated, too. 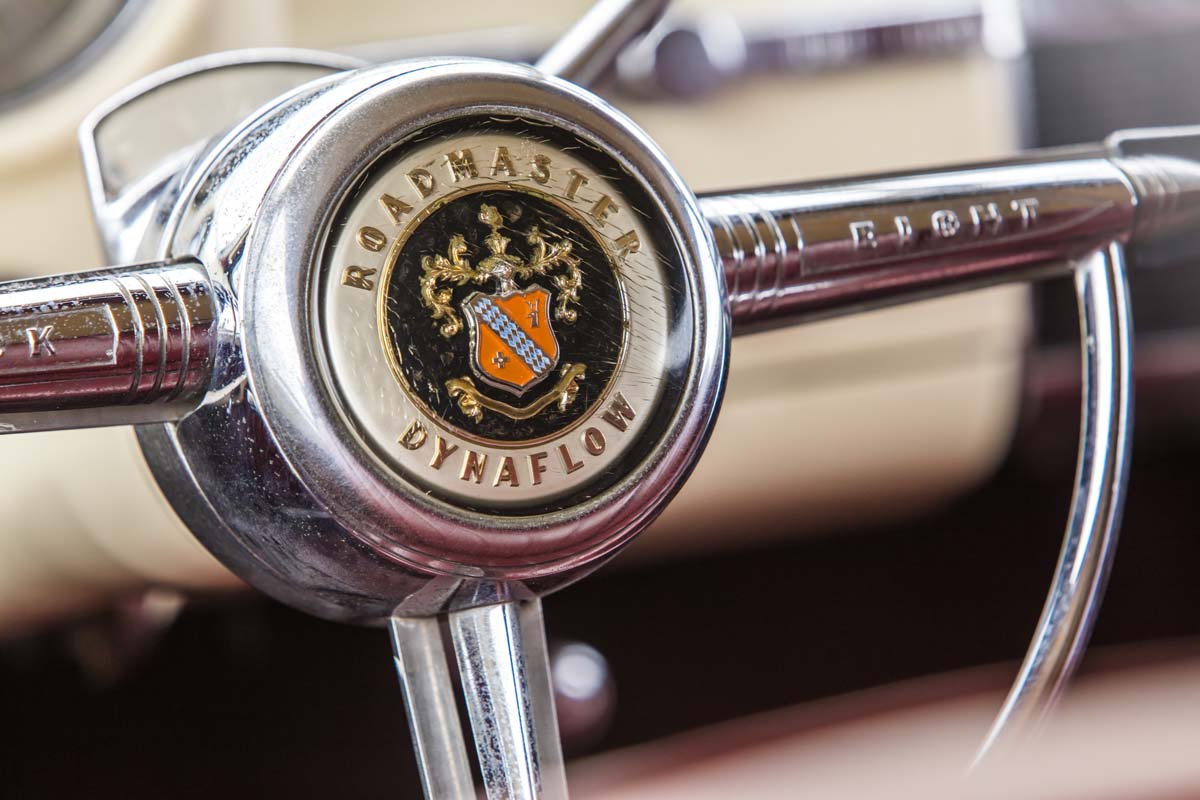 Leather upholstery was standard, and while the impact of weather meant convertibles lacked the mahogany veneer panels fitted to some fixed-roof bodies, full floor carpeting was standard.

The driver of a 1949 Buick Roadmaster convertible was faced with a three-spoke steering wheel with half-ring horn and both ‘Roadmaster’ and ‘Dynaflow’ identification in the boss. The asymmetrical gauge cluster placed a circular speedometer in line with the steering column and a combined ampmeter and temperature gauge on one side, with combined fuel level and oil temp to right. Further right of this was a clock. All the gauges featured pale gold faces with a machined look and dark numbers, with chromed pushbuttons below for the lights, heater and other functions. 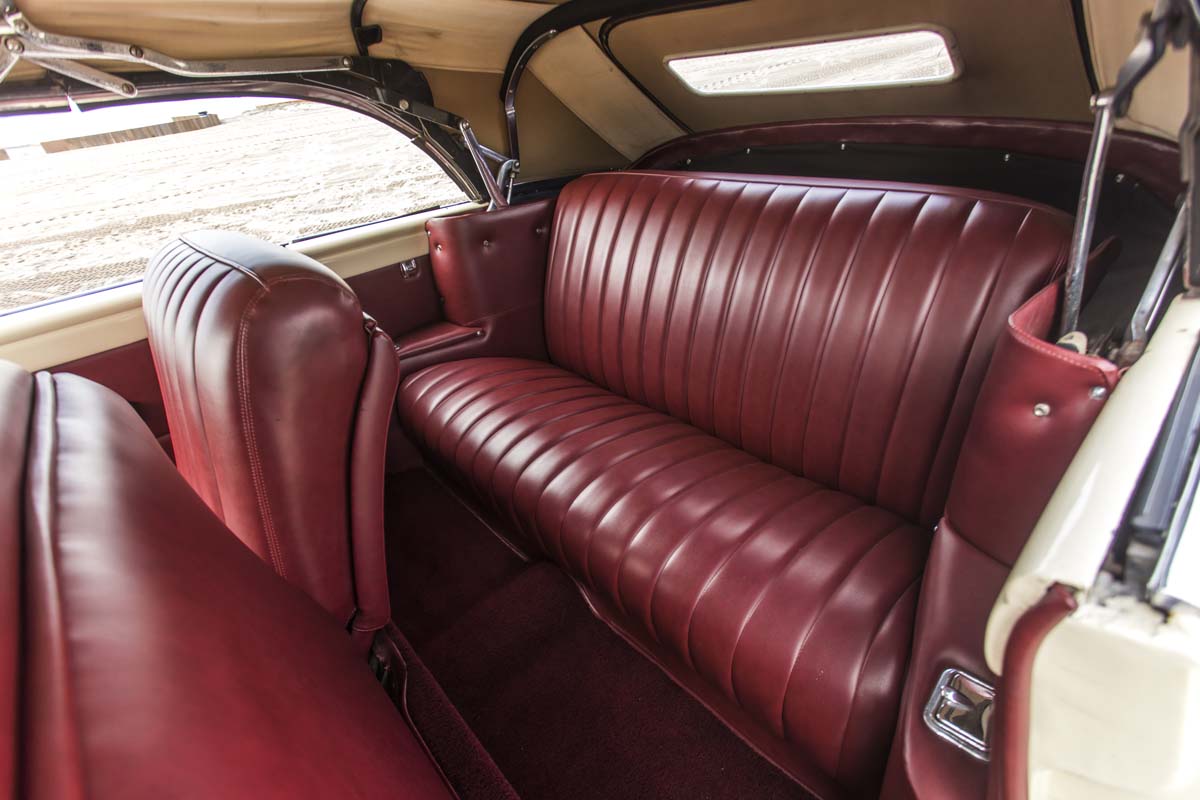 Being a large and heavy car, the ’49 Roadmaster wasn’t exactly a sparkling performer, taking around 17 seconds to reach 100km/h, but Buick was a conservative, mature brand that appealed to conservative, mature buyers. There were enough of those sorts of buyers back in 1949 for Buick to sell just over 87,000 Roadmasters, of which 8,244 were convertibles like the one featured.

Buick’s connection to Hollywood is nothing new, dating back to the very early 1900s and peaking during the 1930s when Buicks featured in a wide number of Hollywood productions, thanks to deals made between a Californian Buick dealer and major movie studios of the time, like Paramount and Warner Brothers. 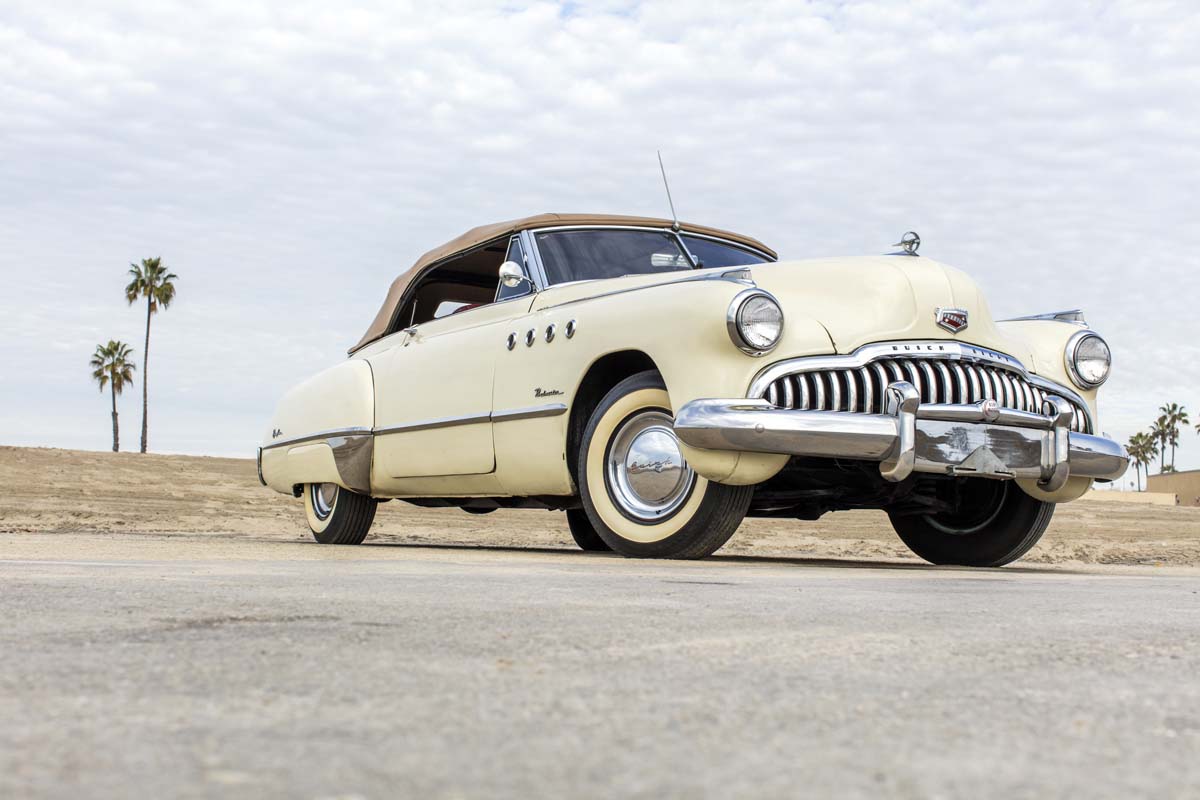 As popular as they were in the movies, Buicks found favour with the actors who appeared in them, too, with the likes of Gloria Swanson, Bob Hope, Ida Lupino, Cary Grant and Will Rogers all purchasing (or given) new Buicks.

In the decades after WWII, Buicks still featured in US movie and TV productions, but far less so. That changed in 1988, when a 1949 Buick Roadmaster convertible was “the third star” in the Oscar-winning Rain Man.

Starring Tom Cruise and Dustin Hoffman, the basic plot of Rain Man concerns Charlie Babbit (Cruise), a selfish Californian car salesman and wheeler dealer who gets virtually ignored in his father’s will in favour of an autistic older brother, Raymond Babbit (Hoffman), whom Charlie never knew. 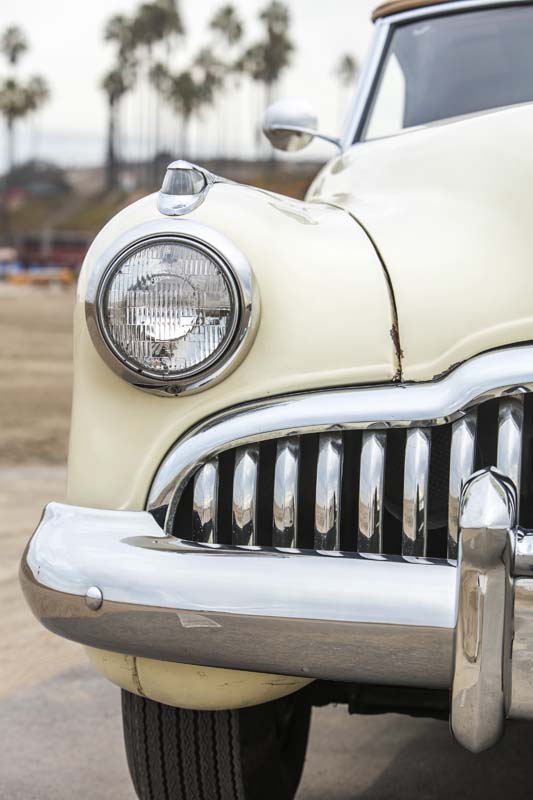 A ’49 Buick Roadmaster convertible is the only item of value left to Charlie, with the rest of the estate going to Raymond, who’s in an Ohio institution. In an effort to recover “his share” of the US$3 million inheritance, Charlie tracks down Raymond and takes him to California. As Raymond refuses to fly, the Buick becomes the vessel for Charlie to get him back to the west coast.

In what’s essentially a road movie, the brothers bond over the course of the journey and Charlie comes to appreciate his brother, his condition and the unique abilities that come with it. 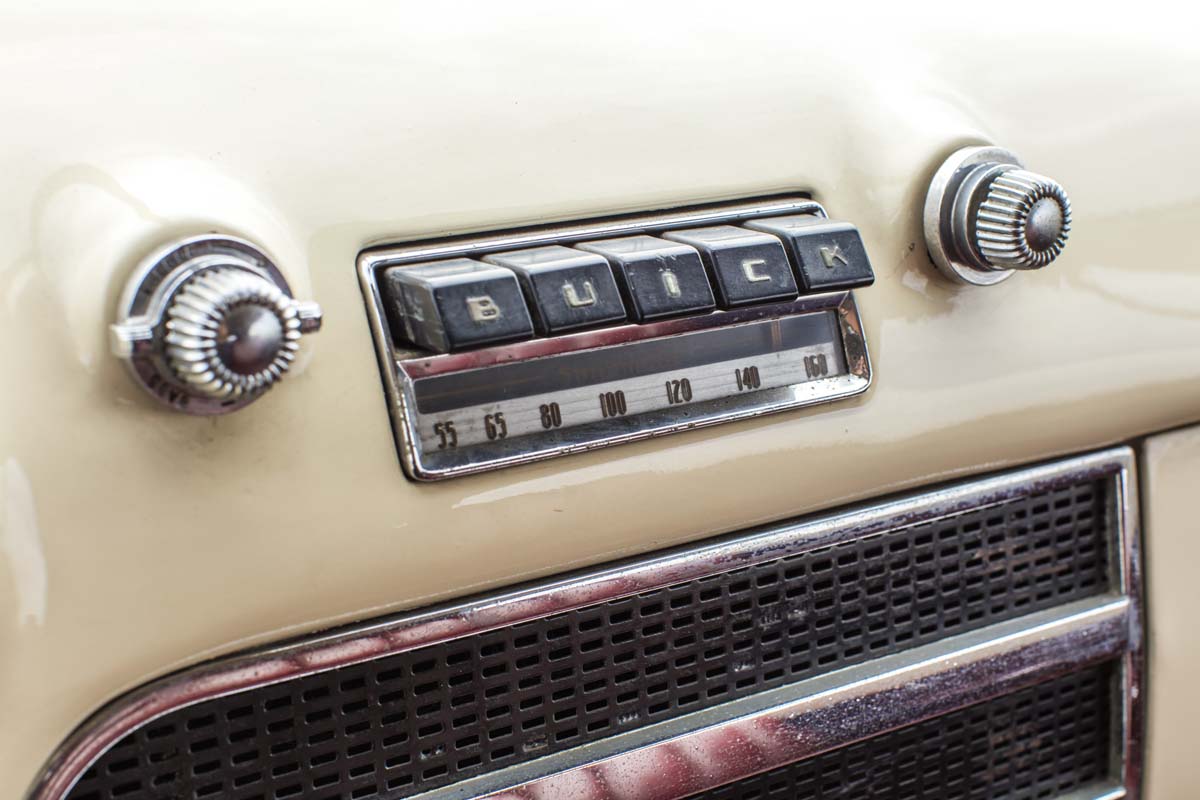 Nominated for eight Oscars at the 1989 Academy Awards, Rain Man won Best Picture and Best Writing, while Hoffman won Best Actor and director Barry Levinson won Best Director. Rain Man was also the most successful film of 1988, grossing US$354.8 million against a US$25 million budget.

Exactly why a 1949 Roadmaster convertible was chosen for the film is unknown, but ahead of filming, the producers of Rain Man, United Artists, purchased two near-identical ’49 Roadmasters. There’s evidence showing one had a black dash (possibly repainted from cream for filming), while both cars allegedly had the rear suspension strengthened to cope with the weight of a camera operator and equipment for in-car filming.

After production wrapped, Levinson purchased one of the two Buicks and Hoffman the other. The Levinson car was restored in 2017 and featured on Chasing Classic Cars.

Hoffman had his Buick partially restored soon after filming completed, but barely used it for the next three decades, leading to the decision to sell it this year.

“The Buick’s been in storage too long,” Hoffman said. “It should be driven, enjoyed and cherished.” 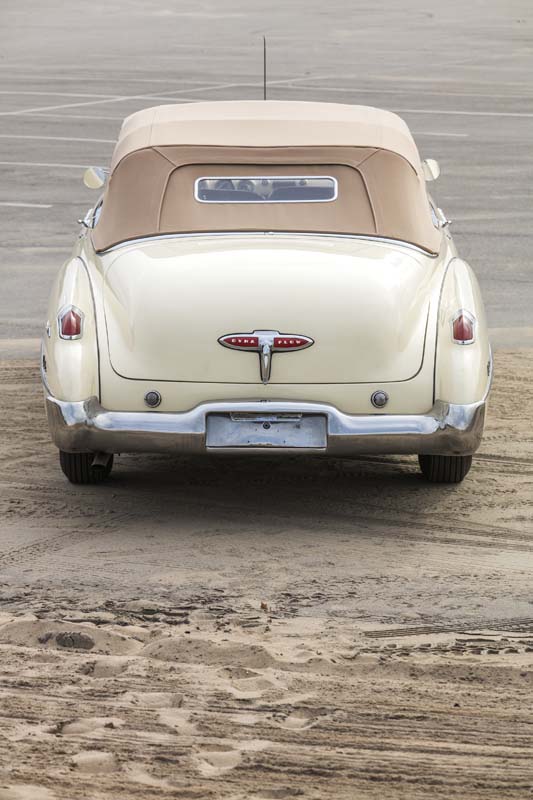 Consigned for auction with Bonhams at their Scottsdale auction this past January, the Buick was showing signs of neglect, with pitted chrome and some deterioration of the interior trim, but the seat upholstery still looked good, as did the convertible hood.

No pre-auction information on the Buick’s mechanical condition was available, but it was running, with evidence of some attention given to the Fireball straight eight, including what appears to be a new or reconditioned carburettor. The state of the transmission, diff, suspension and brakes was similarly unrecorded. 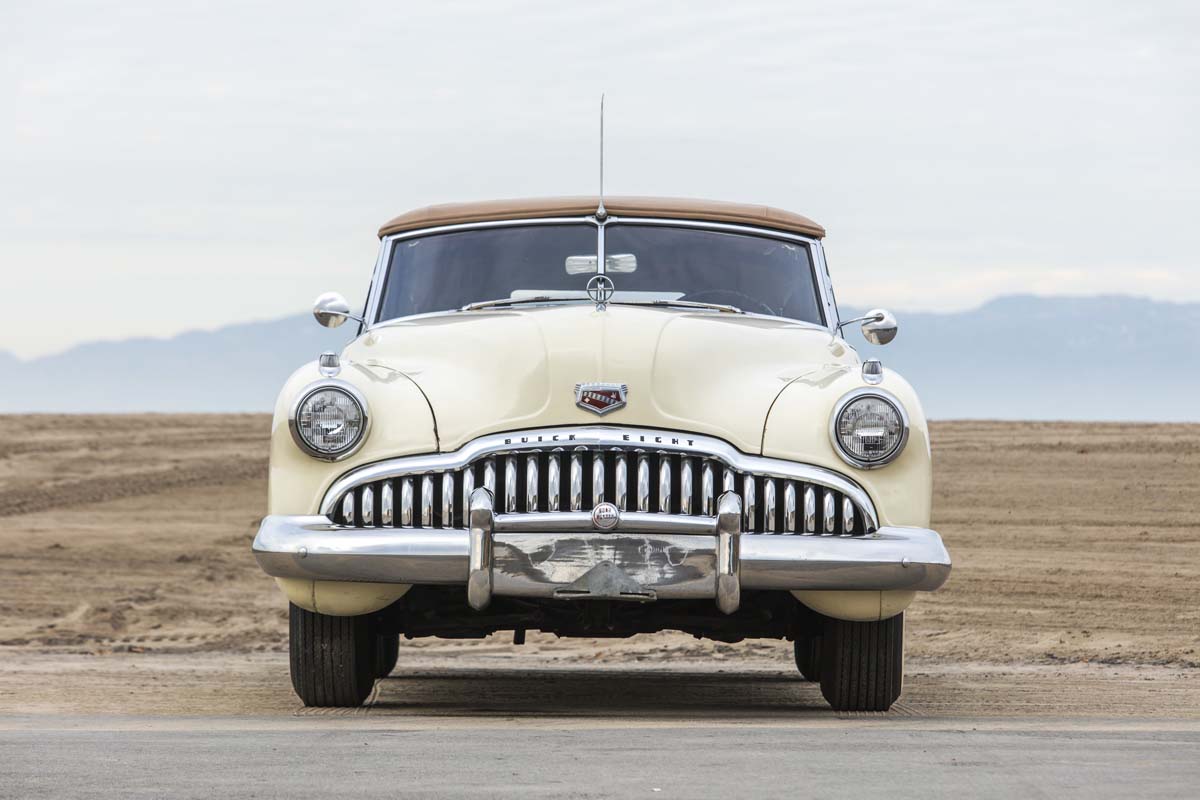 Ahead of Bonhams’ Scottsdale auction on 27 January, this Roadmaster carried a pre-sale estimate of US150,000 – US$250,000, based almost entirely on its movie appearance and Hoffman’s ownership. To put that into context, ’49 Roadmaster convertibles rarely exceed US$60,000 at auction – even for fully-restored examples, with one that fetched US$85,000 in 2013 being the high-water mark.

However, once this auction got underway, spirited bidding from the floor, online and over the phone showed that even Bonhams’ high estimate was conservative, as the Buick sold for a staggering US$335,000 (AU$470,500 approx.) to an anonymous phone bidder. Obviously, this set a new world record for a Roadmaster convertible sold at auction – a record that’s unlikely to be beaten.

While not the top-selling car for Bonhams in Scottsdale, the Buick went close and was part of a sell-through rate of 95 per cent.

“We are so pleased to have started the year on such a high note, with a near perfect sell-through rate and strong prices realised across the board,” said Jakob Greisen, Bonhams Vice President - Head of US Motoring.

For more details, go to: bonhams.com