When he decided to make himself another custom HR Premier, Stewart Pope not only made it, but made it better. 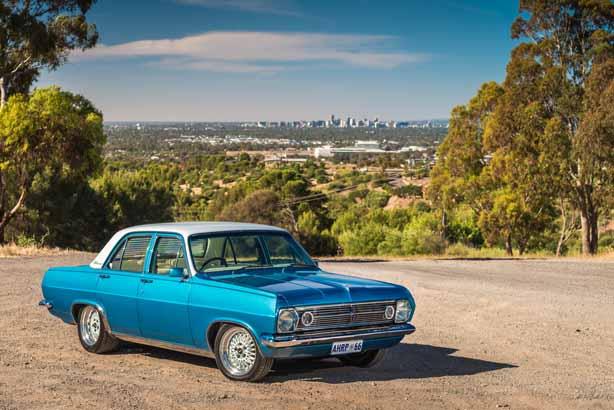 Why that car? It’s a question that gets asked a lot in these articles about an enthusiast’s new purchase, fresh restoration or newly-completed project. More often than not, the answer to that question will be something to do with the car their family had, the first car they owned, or the first resto project they did.

For better or worse, we often build a connection with our cars, particularly units that impressed us as children, that we owned for a long time, or put a lot of blood, sweat and tears into.

In the case of this custom 1966 HR Premier built by Stewart Pope, all three of those reasons applied.

A History in Holden

South Australian born and bred, Stewart can distinctly recall the first car that made an impression on him – a Holden HR Premier.

“When I was about 10 years old, a friend of the family had an HR Premier sedan - white with red interior. I loved that car, so I said to him, ‘I want to buy that car from you’.”

Given Stewart was only ten, the friend probably didn’t pay a whole lot of notice, but Stewart was nothing if not focussed and retained interest in that particular car for years to come.

“When I was 18, I purchased that car from him. I had it for 14 years after that and did lots of modifications to it in that time – but sold it to purchase a new family car in 1995.”

Stewart’s love of HR Holdens never waned though, and even when he bought a ’72 Torana to make an XU-1 tribute in 1999, an HR Premier was in the back of his mind.

Fast forward to 2010 and Stewart decided 15 years without an HR was long enough and it was time to get one back into the garage. 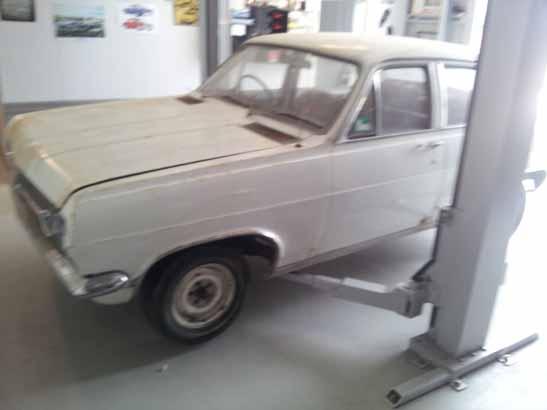 The search for a new HR Premier started with Stewart looking at several advertised locally, but they all failed to pass muster on one of two criteria: too expensive; or too rusty.

With mechanical, auto electrical, repair, panel beating and painting skills, Stewart wasn’t afraid to take on a project, but was realistic about what could be achieved, so the starting point had to be restorable. Conversely, given his skills, there was no need to buy a completed restoration, as it’d most likely be outside his budget, costing money he could use elsewhere.

Given the fact Holden built over a quarter of a million HRs in total, you’d think a restorable HR Premier would be obtainable in short order, but nothing suitable was found, so after approximately a year of scanning the classifieds for no results, Stewart placed a wanted ad. That fared little better: “I got about four replies - two HR Specials and one Premier that was already restored - not what I wanted!”

The fourth reply proved to be a winner, though.

The HR Premier that Stewart ultimately purchased was in a wrecking yard and had been purchased by the yard owner’s son as a father-son project.

“When the dad saw it, he said, ‘I don’t think so’, so the son contacted me and $800 dollars changed hands. That’s when the fun began!” Stewart laughed.

By this stage, it was May of 2013 - three years since Stewart first decided to act on his desires to get an HR Premier, so he didn’t muck around now he finally had a car.

The same day he purchased the car, he completely stripped it down. That revealed rust in the usual areas of the door bottoms and sills, but somewhat surprisingly, the floors were mostly good. The biggest and most obvious flaw was a big hit in the left rear quarter.

Too big to hammer out, the best and simplest thing to do was to stitch in a replacement panel so Stewart sourced a donor HR with just such use in mind.

Other new and replacement panels included the boot floor and outer skins for the rear doors. 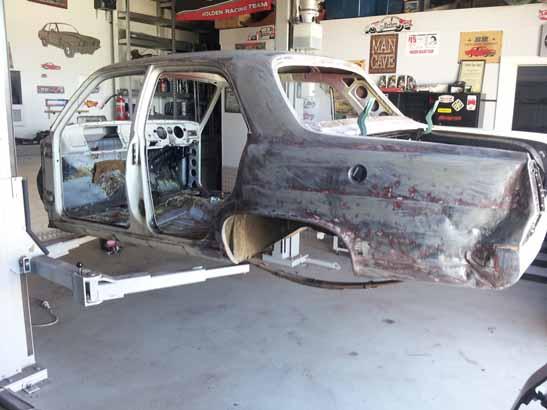 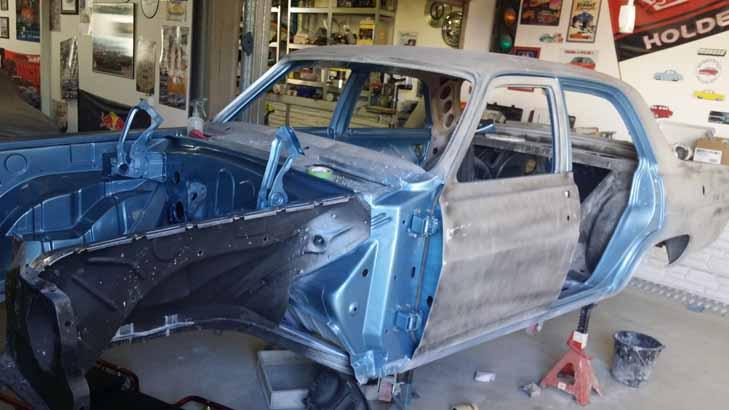 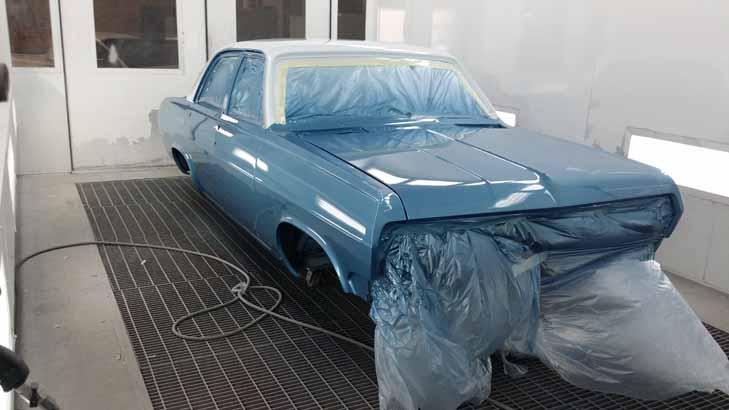 Initially, Stewart’s plan was to keep the Premier looking largely stock from the outside, with standard wheels, hubcaps and exterior trim, but with a fuel-injected 5.0-litre V8 under the bonnet, plus a complementary auto transmission and other mod cons inside – essentially a modern version of what he’d had with his first HR Premier all those years ago. However, a chance sighting set the build on a different path.

“I saw an EH with Simmons wheels and decided that this had to happen for my build, so the search began.”
The wheels were easy enough to find, with Stewart locating a set of Simmons ‘V5’ alloys at the Ballarat Swap Meet. A brake kit from Hoppers Stoppers was next, to help determine the offset required to fit Commodore disc front brakes up front and retain the factory HR drums at the rear. In the end, Stewart determined that 16x6.6-inch would be needed at the front and 16x8-inch at the rear. New inner and outer rims were then made specifically to suit this requirement before 195/50 16 Kumho rubber was fitted on the fronts and beefy 225/50 16 Maxxis hoops added at the rear.

The drivetrain took a different path, too.

Partway through the build, the V8 idea was scrapped and a 202 six was selected instead, but this would be no normal Holden red motor.

To the red motor block, Stewart added a crankshaft, rods and pistons from a later blue motor (most often seen on VC/VH Commodores and WB utes and one-tonners), a mild cam and the 173 high-compression version of the blue motor’s 12-port head. Crowning this, a Redline inlet manifold and a trio of Weber 45 DCOE carbies were added.

An alloy 3-core radiator was fitted to keep things cool, aided by a thermo fan, while the battery was relocated to the boot. A fuel pressure gauge was fitted, too.

As this engine bay was made to look good as well as go good, attention was paid to details, so braided lines have been used throughout, with a chromed brake master cylinder and polished rocker cover featuring, too, while the custom exterior paint extends into the engine bay and highlights all that bling. 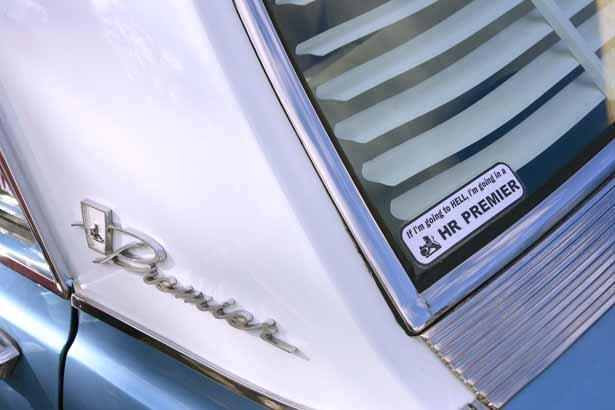 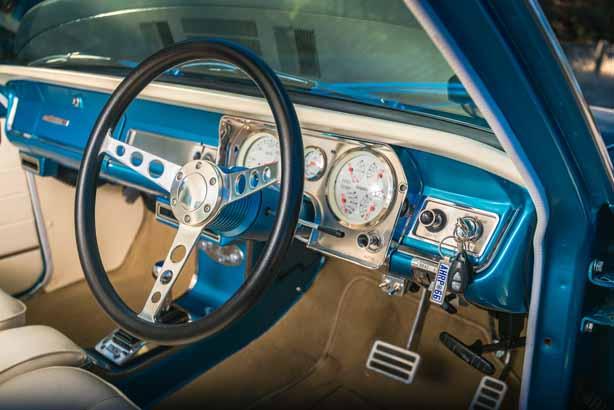 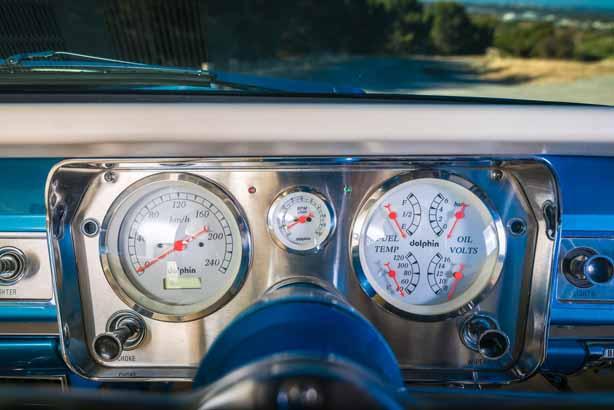 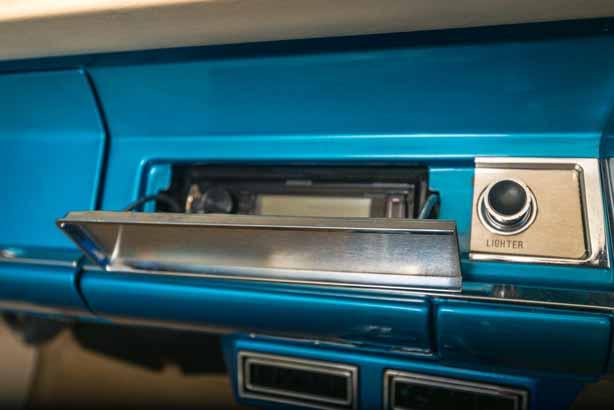 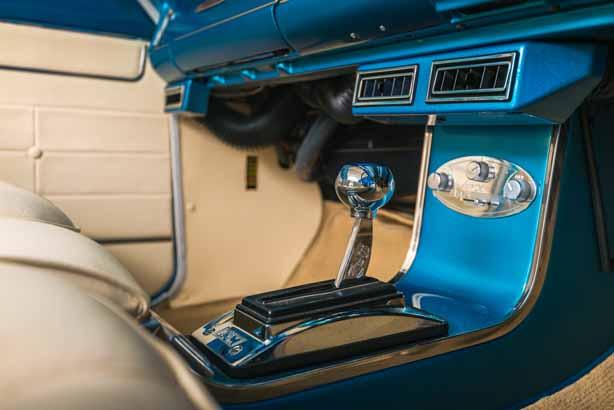 Choosing the 202 engine indicates Stewart wasn’t after outright performance with this build, and that bias toward comfort and usability continued with the suspension, which is stock HR but lowered and with front and rear sway bars added.

Moving to the interior, the seats may look like they’re from a later Holden or a different make altogether, but they’re authentic HR Premier style, re-trimmed in bone leather, with complementary door cards. The high backs of the split rear bench are period-correct, too, and do a nice job (along with the rear venetian) of hiding the parcel shelf subwoofers for the Kenwood digital sound system. To the same effect, the head unit for this was placed in the ashtray and the amp in the boot.

While the seats and trims are authentic HR Premier, Stewart went custom for the driver centre, with a SAAS-style steering wheel, aftermarket pedals, B&M shifter and a Dolphin gauge cluster that includes tacho, temp, oil pressure and volt meters, as well as a digital odometer, all sitting neatly in the standard Holden instrument panel.

The centre console was customised to house the control unit for the Vintage Air air con system, with vents added under the dash and at the rear of that console, too. 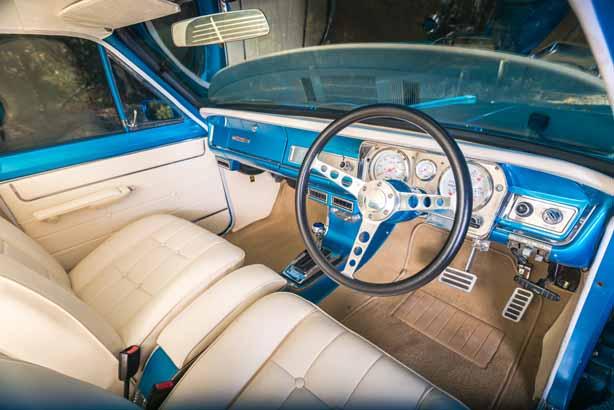 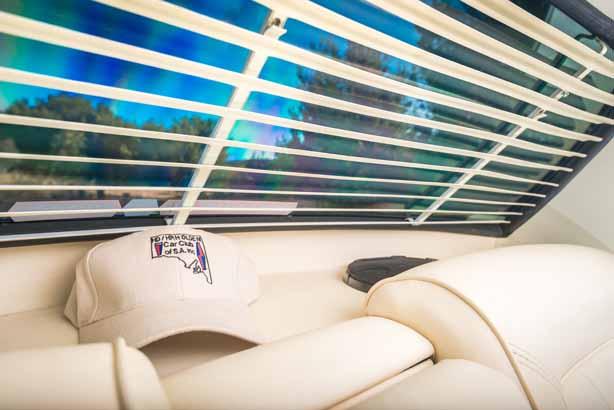 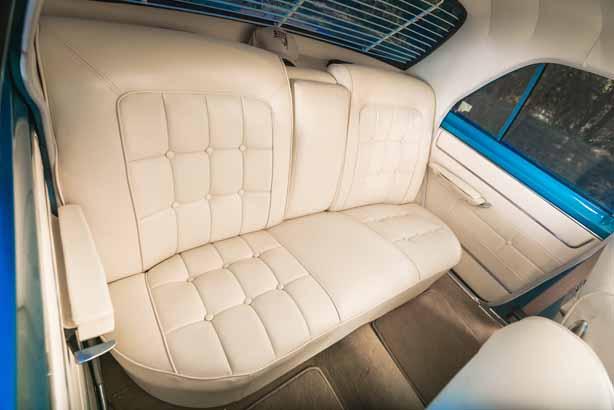 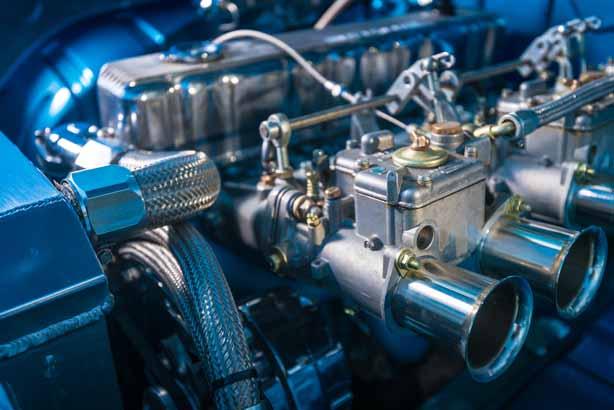 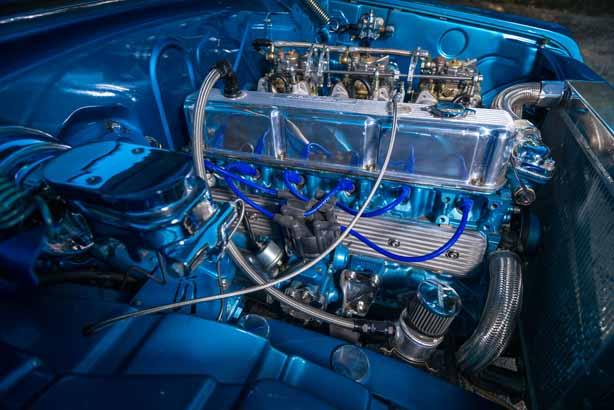 While it looks like it may have been an HR Premier colour back in the day, that metallic blue is actually a custom mix that Stewart created and sprayed himself.

Enhancing the blue is a white contrast roof and the white centres for those custom Simmons rims, as well as all the chrome and stainless trim that’s been polished to a high shine.

In April, 2016 - a month shy of three years since he started - Stewart finished the build and was ready to hit the road.

Stewart humbly describes his Premier as ‘just a cruiser’, but it’s much more than that. It’s first-class and show quality in a lot of areas, but isn’t pampered – it gets used and used often.

Taken it to numerous ‘Coffee and Chrome’ events in Adelaide, the car never fails to draw attention.

“The car does get a lot of compliments,” Stewart said. “Most people ask me, ‘Did you do it yourself?’ and as I did most of the work myself in the back yard, the answer is ‘Yes’.”

As well as local events, including runs with the SA chapter of the HD/HR Holden Car Club, Stewart has also taken his Premier interstate, specifically to the HD/HR Nationals in Canberra in 2017 and Bendigo in 2018 - where JUST CARS first spotted it – as well as last year’s HD/HR Nats in Adelaide.

In a lineup of mostly original or restored HR Holdens at the Bendigo HD/HR Nats, Stewart’s Premier really stood out, not only for that striking paint, but also for the obvious and not-so-obvious modern touches. This writer wasn’t the only person who thought so, as the car picked up the Nationals’ ‘Era Sports’ trophy (that recognises mild, period-authentic modifications) at Bendigo, as well as Canberra.

Redlands in Queensland will host this year’s HD/HR Nationals and we wouldn’t be surprised if Stewart takes his sweet blue cruiser there, too. Given the drought between his first HR Premier and this one, you can’t blame Stewart for spending as much time with it as he can. 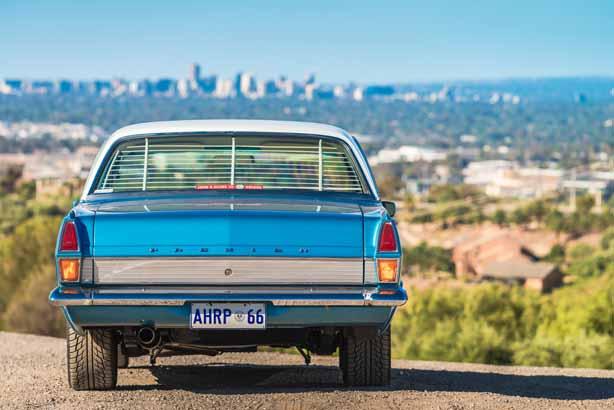 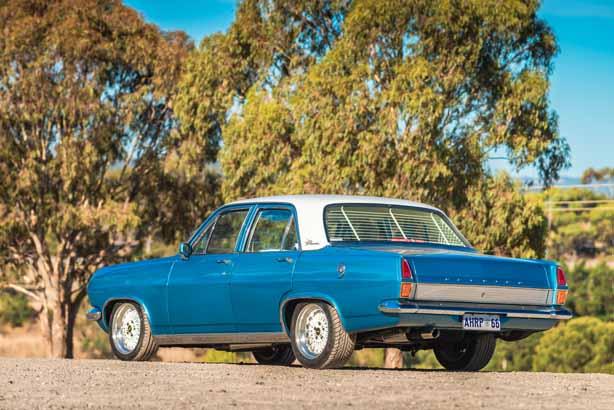 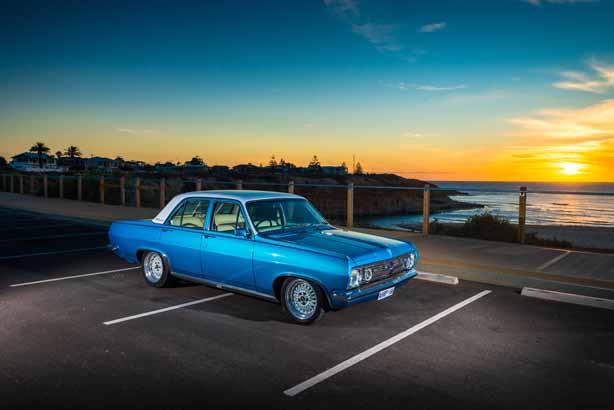 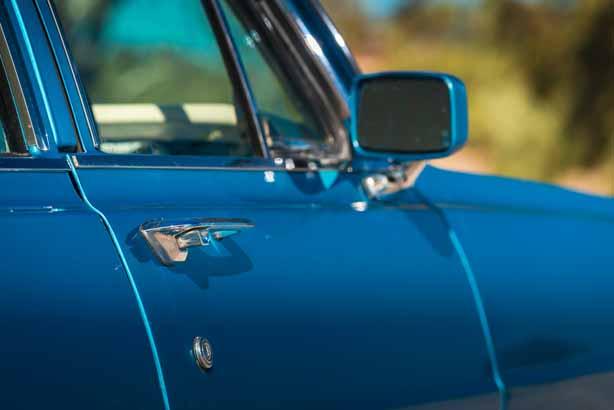 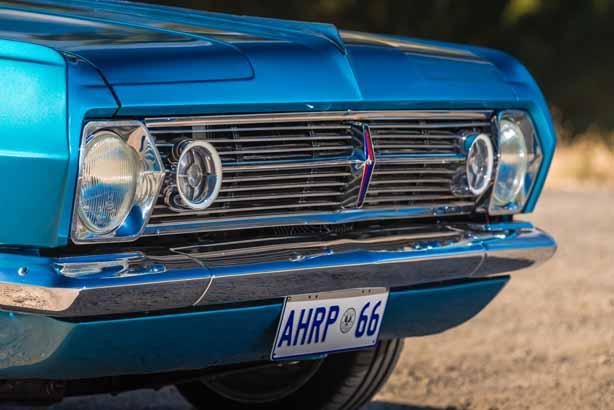 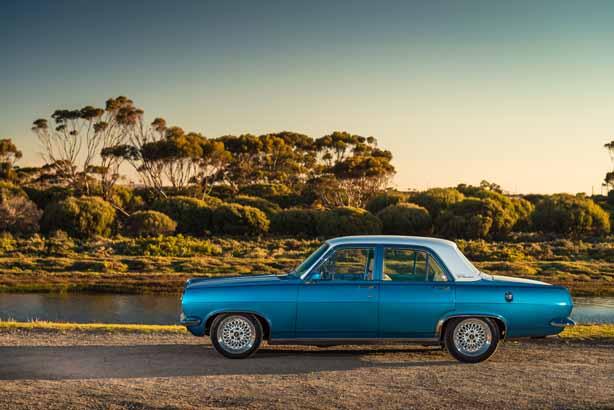 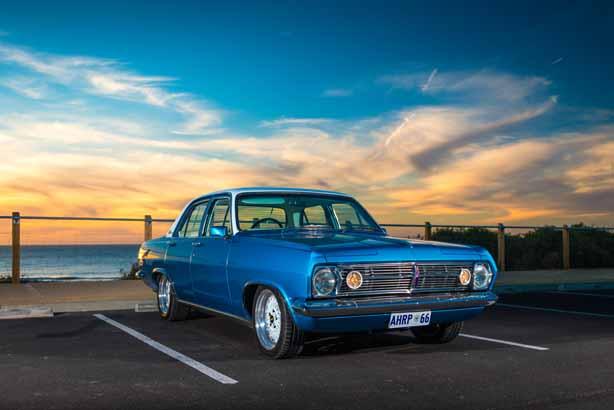 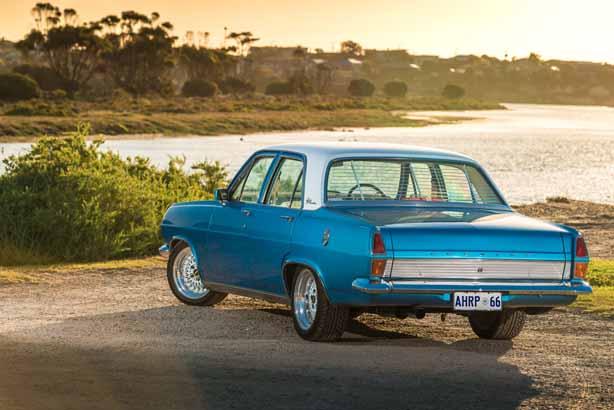 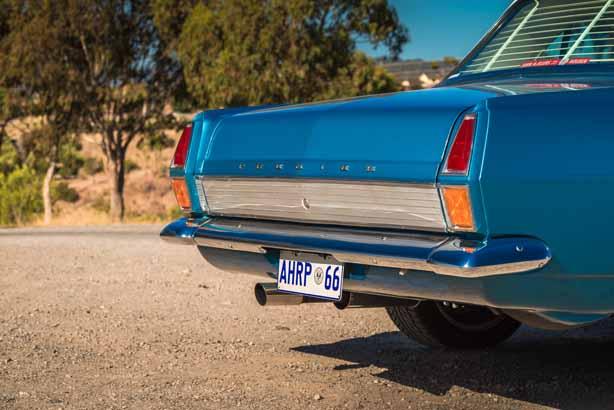