The early 1970s, just before the oil crisis struck and ruined the fun, was a wonderful time to be out supercar shopping. The Italians in particular were creating automotive works of art housing thumping V8s and V12s, offering increasingly tasty power figures and top speeds. Exotic, fast, sexy and restrictively expensive, these were the hero cars that inspired a generation.

But what if you could get the looks and performance without the huge cost? Enter the De Tomaso Pantera (Italian for panther) of 1971. Here was a car featuring textbook Italian supercar looks with its wedge shape and purity of line, while mid-mounted in front of its raised angular rump sat a tried-and-tested American Ford V8 engine. A Ford-stamped 5.8-litre (351 cu in) Cleveland V8 may rob the Pantera of some Italian glamour, but if you ever need to pay for an engine rebuild any owner would prefer to see a bill for one of these over, say, a Modena-sourced V12.

The Pantera was unquestionably a supercar though. Monocoque body, independent suspension and a tube subframe holding the 246kW V8 and five-speed ZF transaxle, this rapid wedge could crack 100kmh in just 5.5-seconds, placing it at the top table of performance cars of the era.

Costing around US$10,000 at launch in 1971, the De Tomaso Pantera was about half the price of rivals such as the Ferrari 365 GTB Daytona, Lamborghini Miura or Maserati Ghibli. That meant Italian supercar ownership was now within reach to more than just titled playboys or film stars.

Even they bought them though. Notable Pantera owners over the years have included racing legends Sir Jackie Stewart and Mario Andretti; singing stars Ricky Nelson and Vince Neil of Motley Crue (who crashed his, killing another musician), and even the King of Sweden. Elvis Presley had a 1971 example, yet found it so unreliable he once pulled out a gun and shot the steering wheel when it refused to start once too often. Legend goes that the V8 turned over immediately after The King had made his point.

The Pantera’s design was certainly an enduring one. Over 7000 were made during a production run between 1971 and 1992. Putting that in perspective, Lamborghini’s Countach of 1974-1990 managed just over 2000 units. Much like the Countach, the Pantera’s body gained wings, bulges and other add-ons as the grip of 1980s excess came to the fore, meaning these Italians were at their most visually pure in their formative years.

This striking light blue Pantera is one of the earliest, delivered to California in 1972. Its current owner, Dave Farrer of Noosa Heads in Queensland, has owned it for the last year since buying it at a Mecum auction in the States.

Dave’s no stranger to Italian exotica and other valuable classics. His current inventory includes a Ferrari 308 GTB, Lamborghini Countach and Porsche 356B Roadster. But he certainly has a thing for these De Tomasos. He also cherishes a 1974 red example and a 1972 orange monster complete with metal flared arches and almost impossibly fat wheels and tyres.

Despite its purer and more innocent looks, Dave believes his blue 1972 Pantera is the most powerful in his collection. “The fuel crisis meant they had to decrease the power in the motor for emissions control,” he explained. It is also the most original example from the trio, something that appealed to him before he committed to its purchase.

“It was original right down to the spare wheel, it had all the bits and pieces you want to see on a car, including an original California smog test sticker on the windscreen from December 1975,” Dave said. “It had been a California car its whole life, still with its original blue plates (California license plates) adding to the desirability. A lot of cars are made to look like something they’re not, but I’d been completely over this Pantera and it had lots of originality, so we brought it back to Australia.” 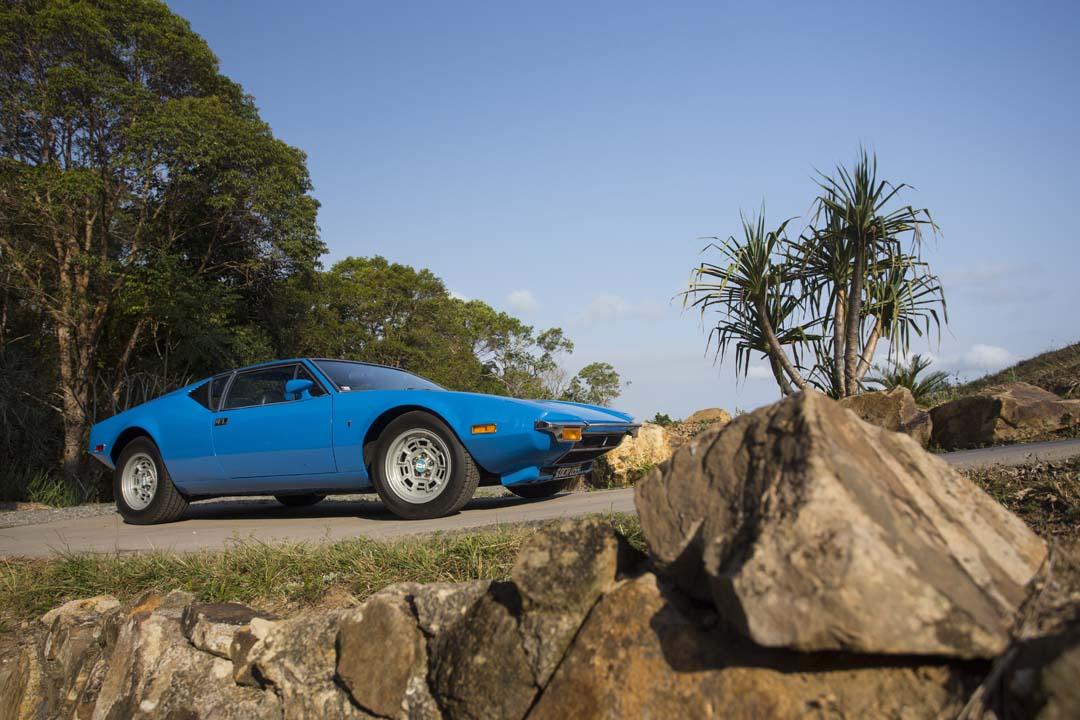 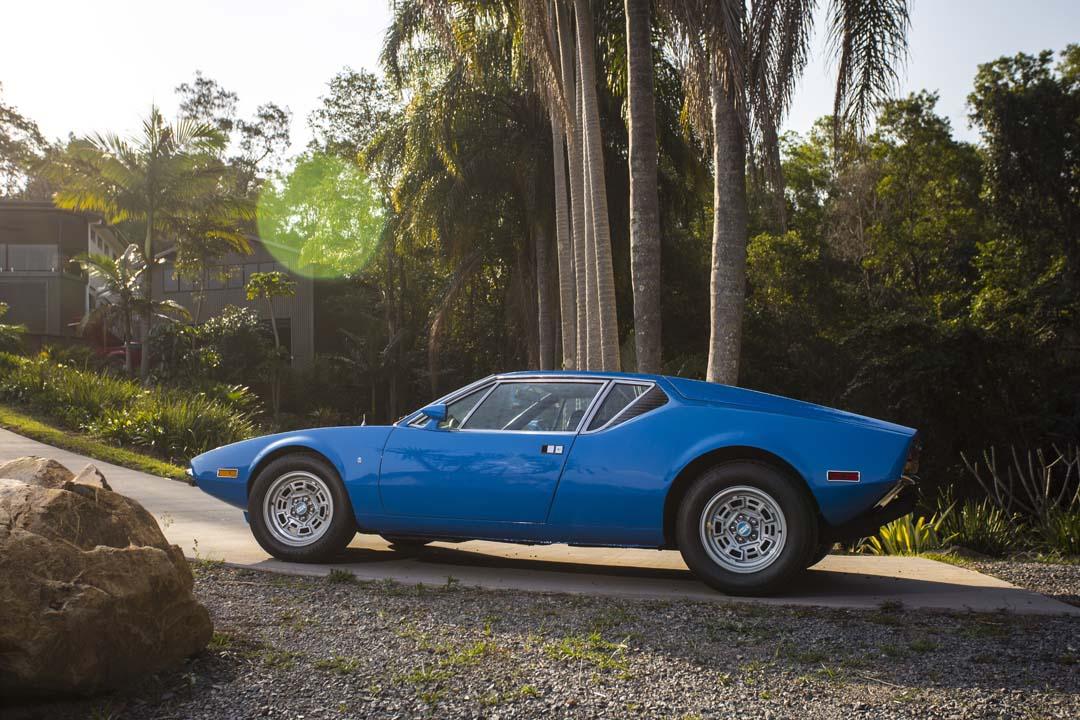 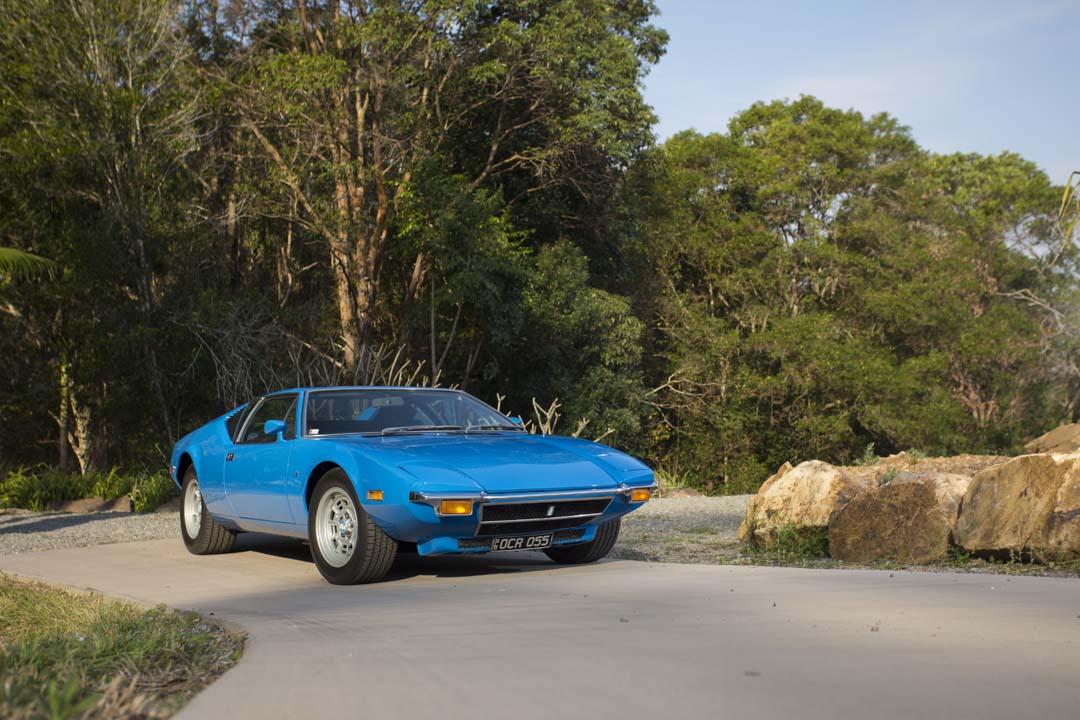 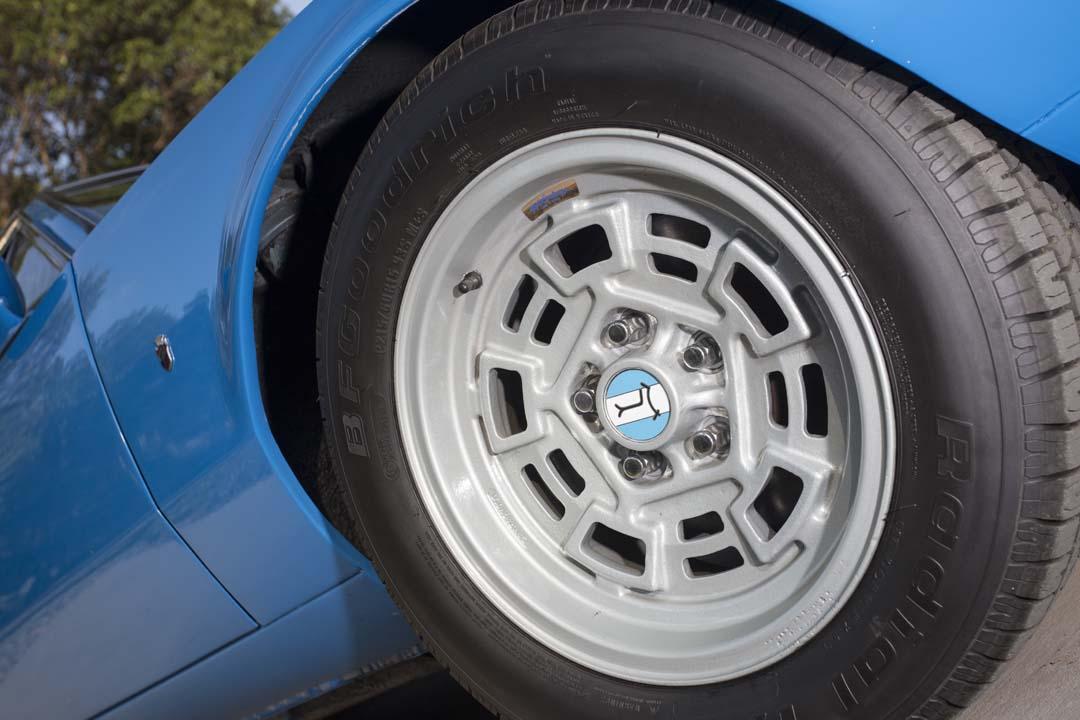 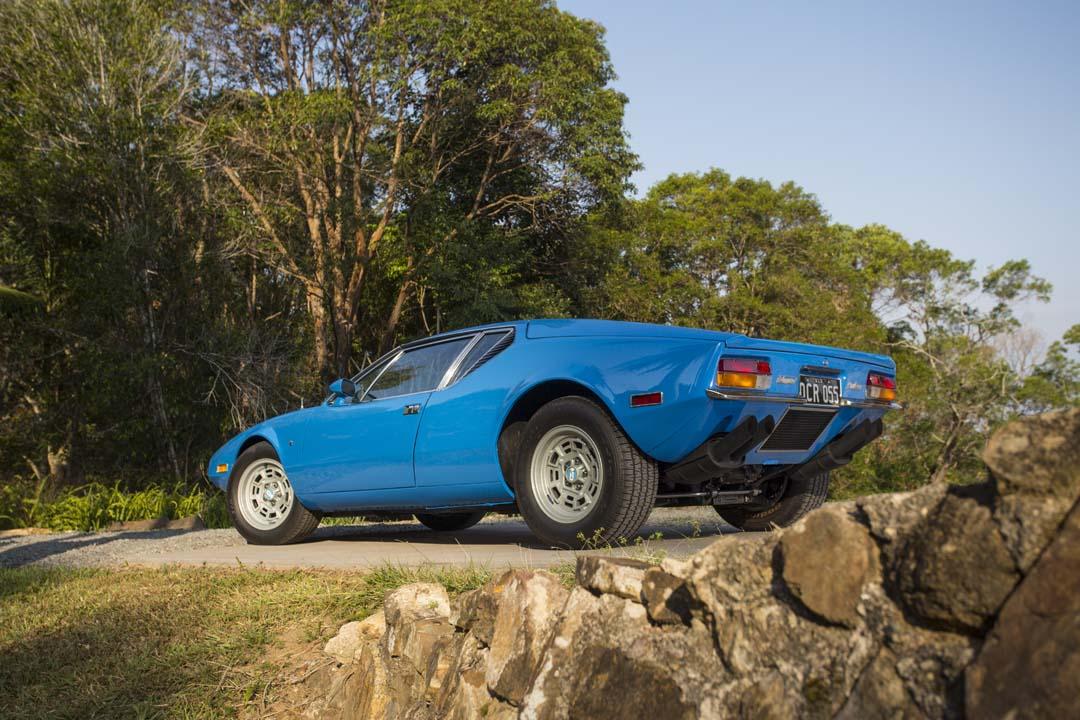 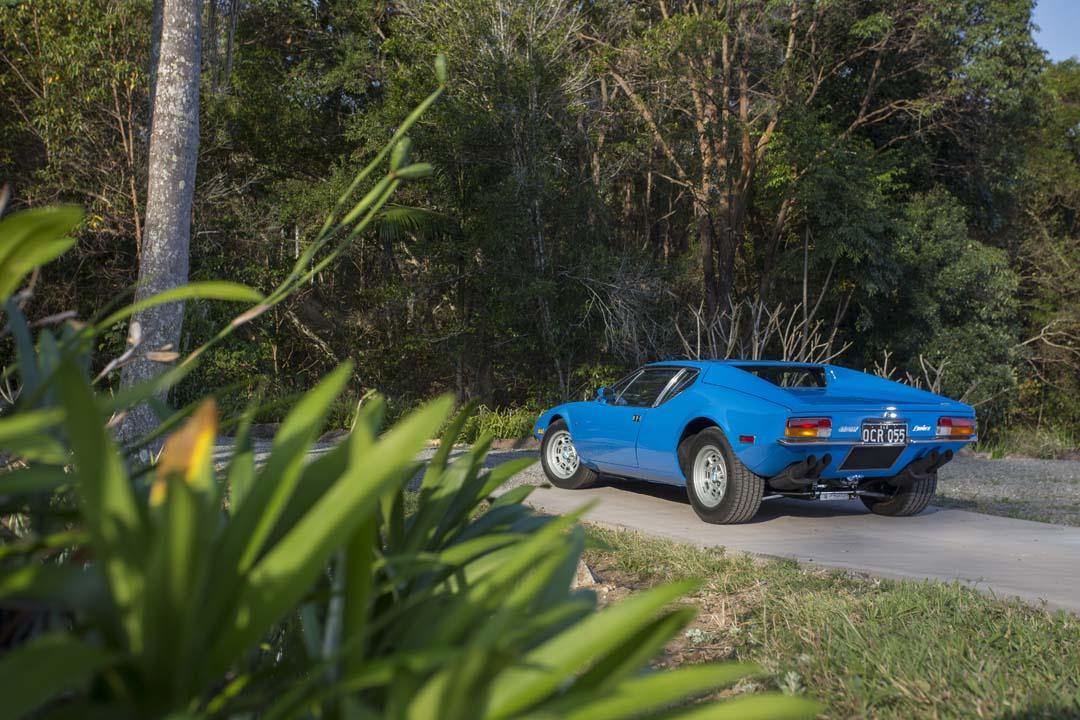 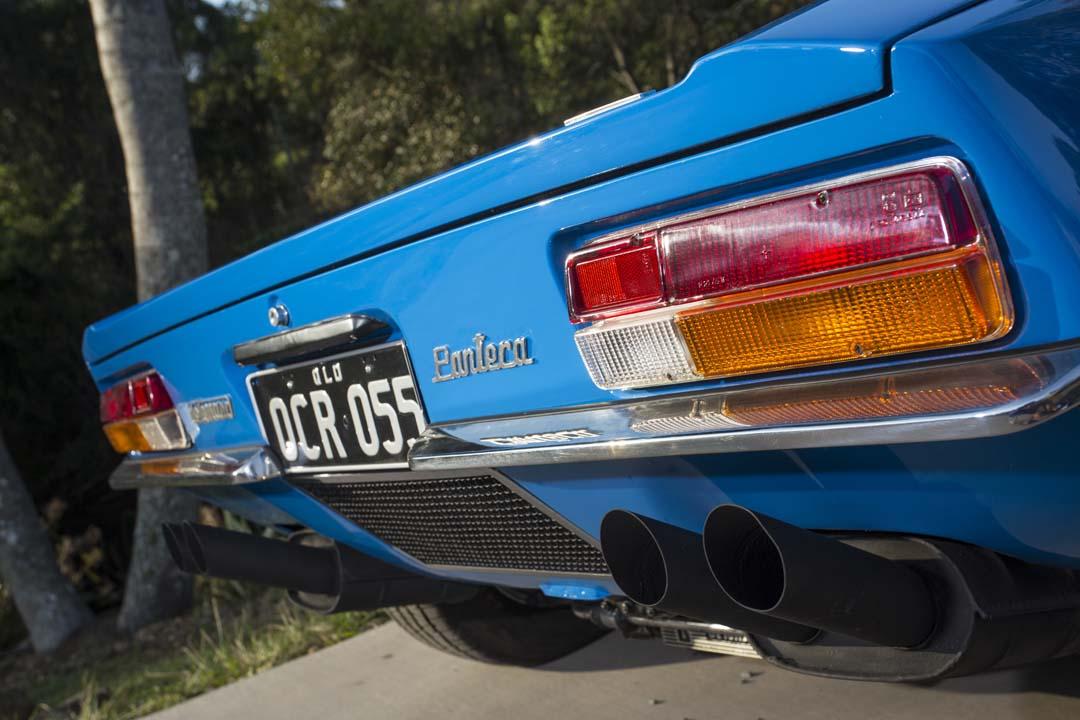 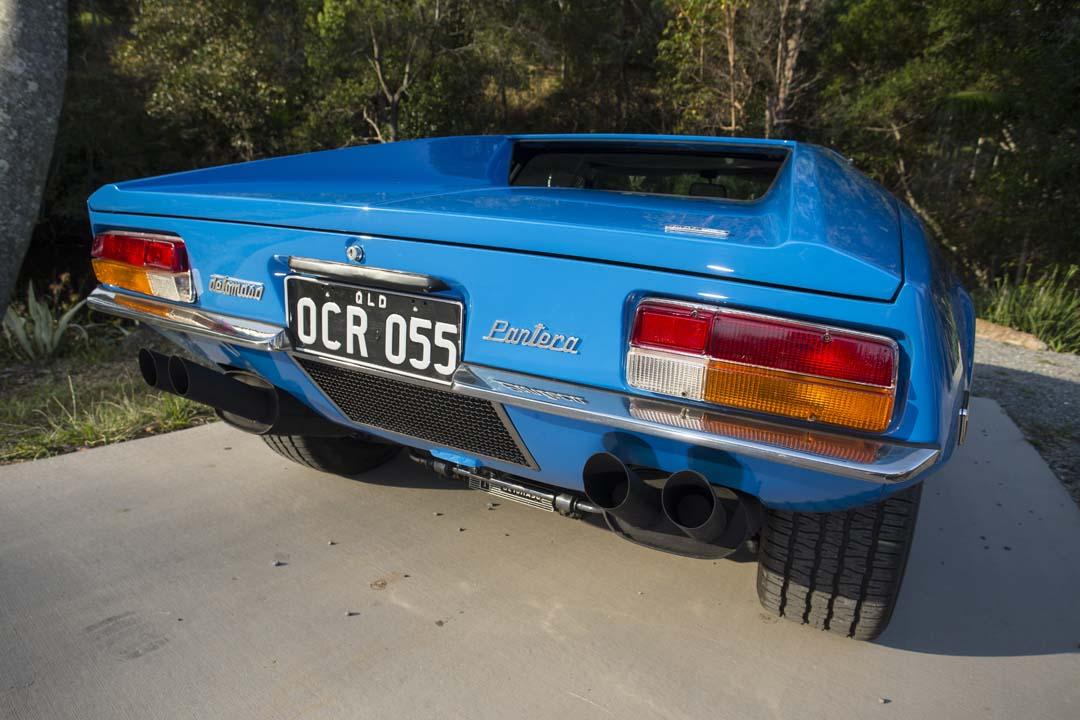 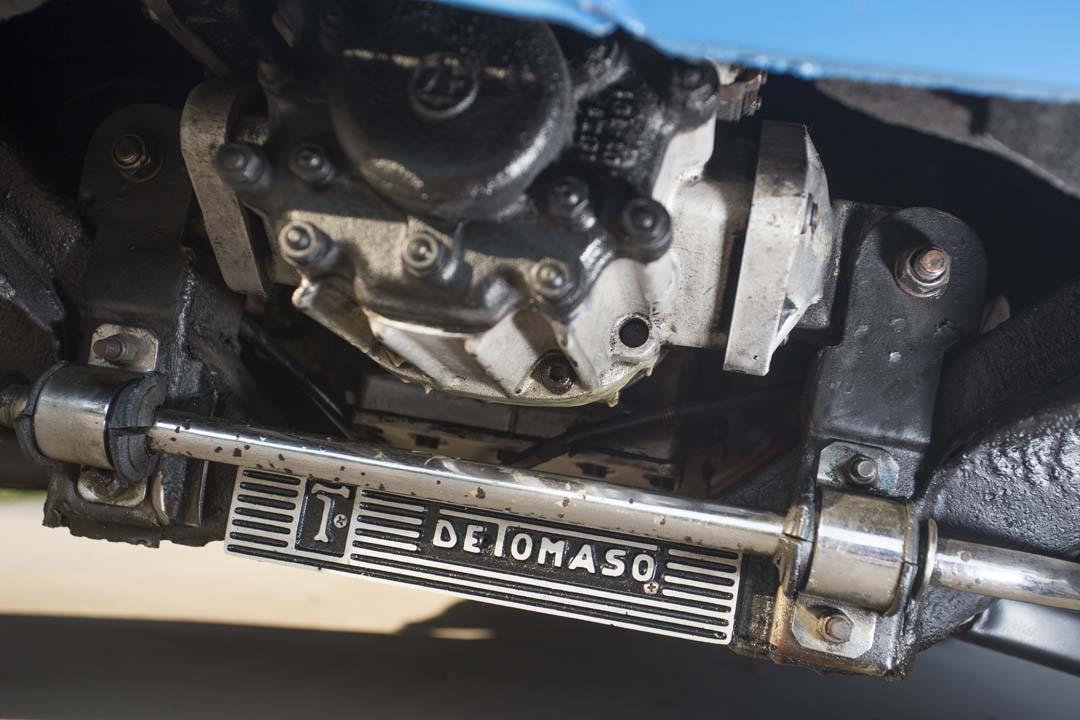 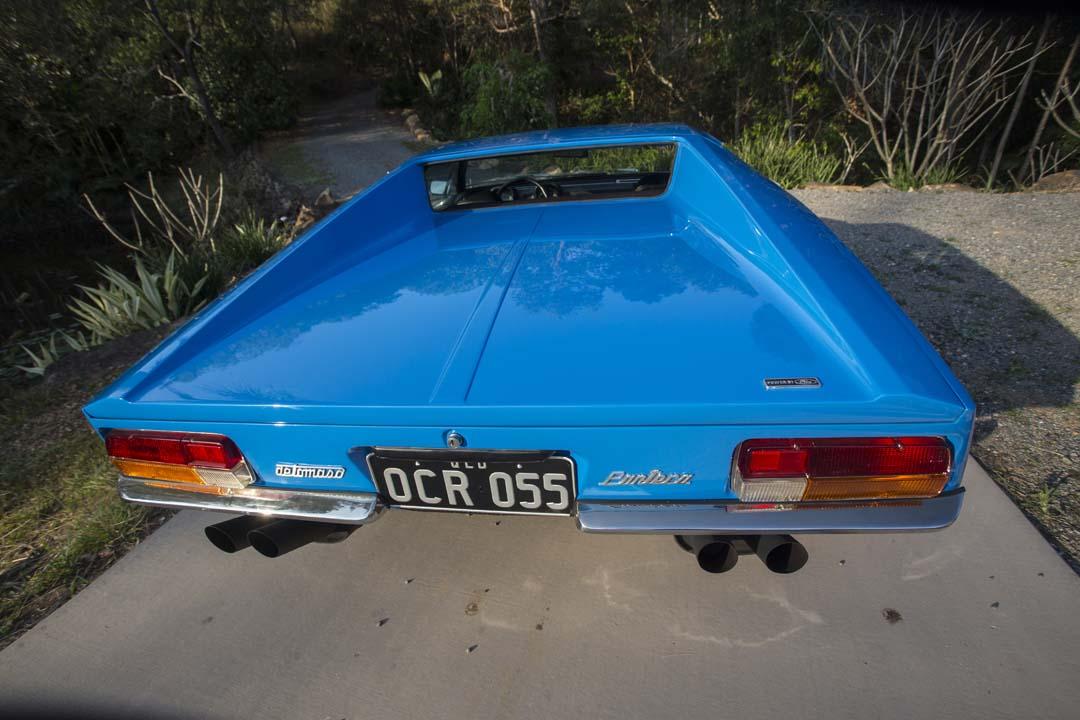 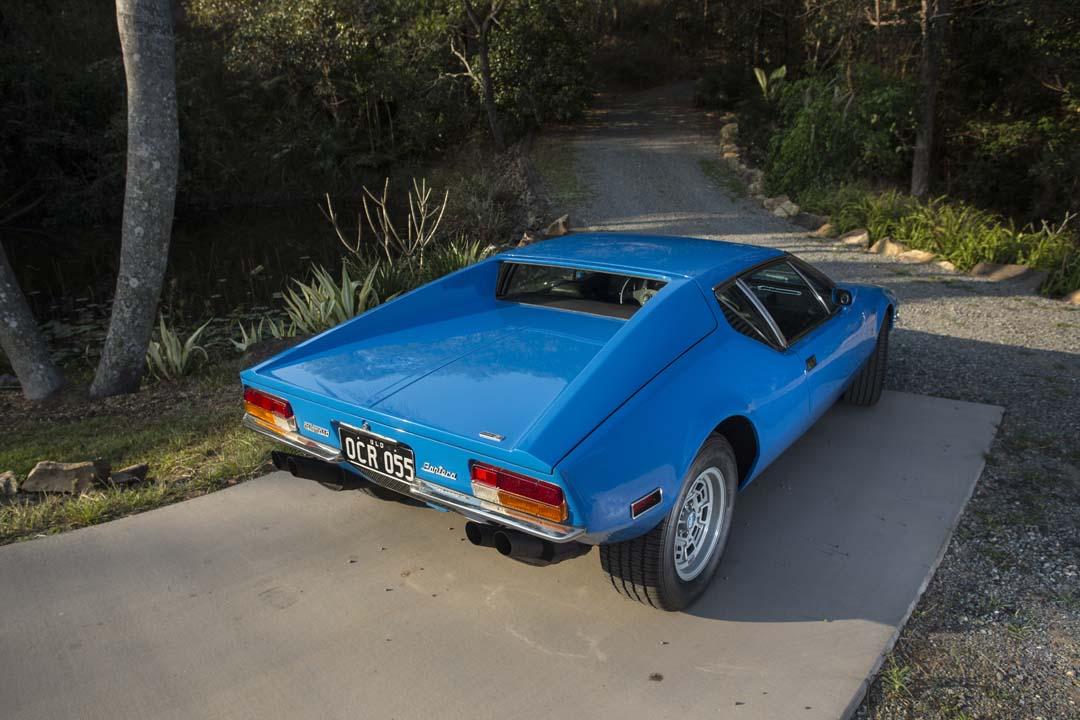 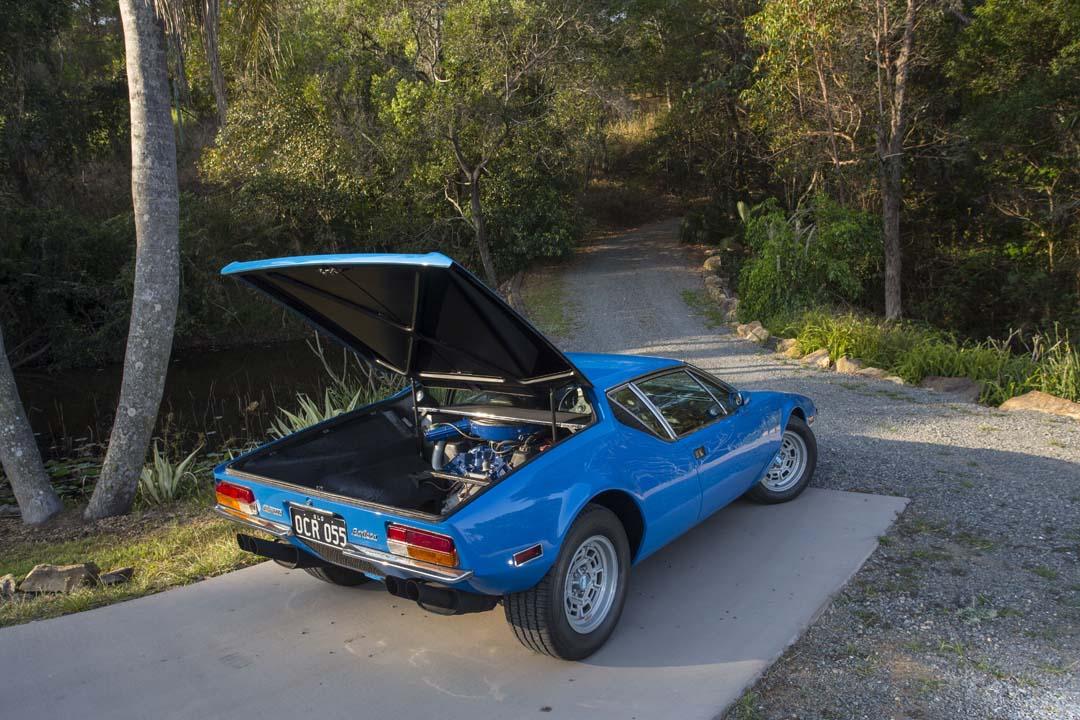 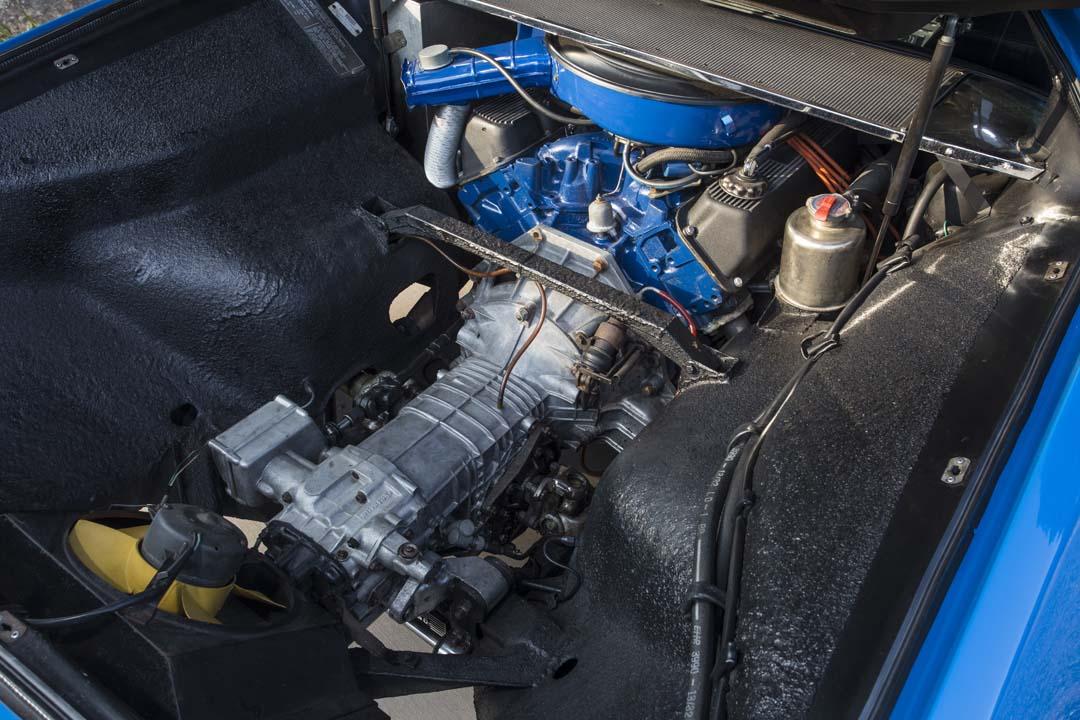 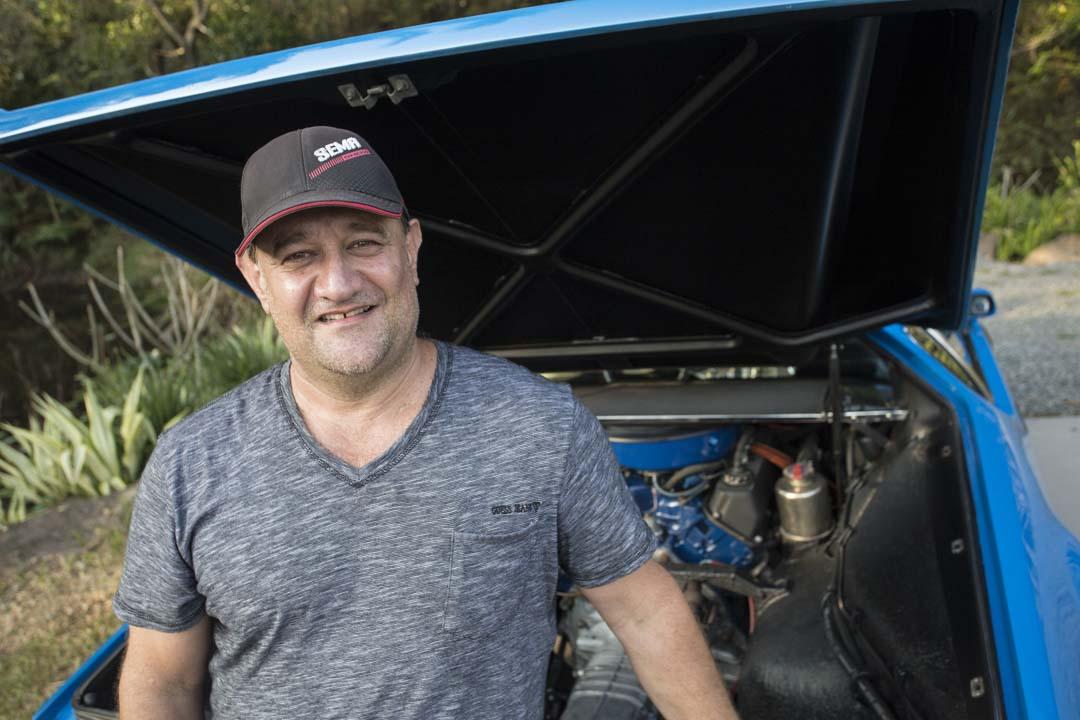 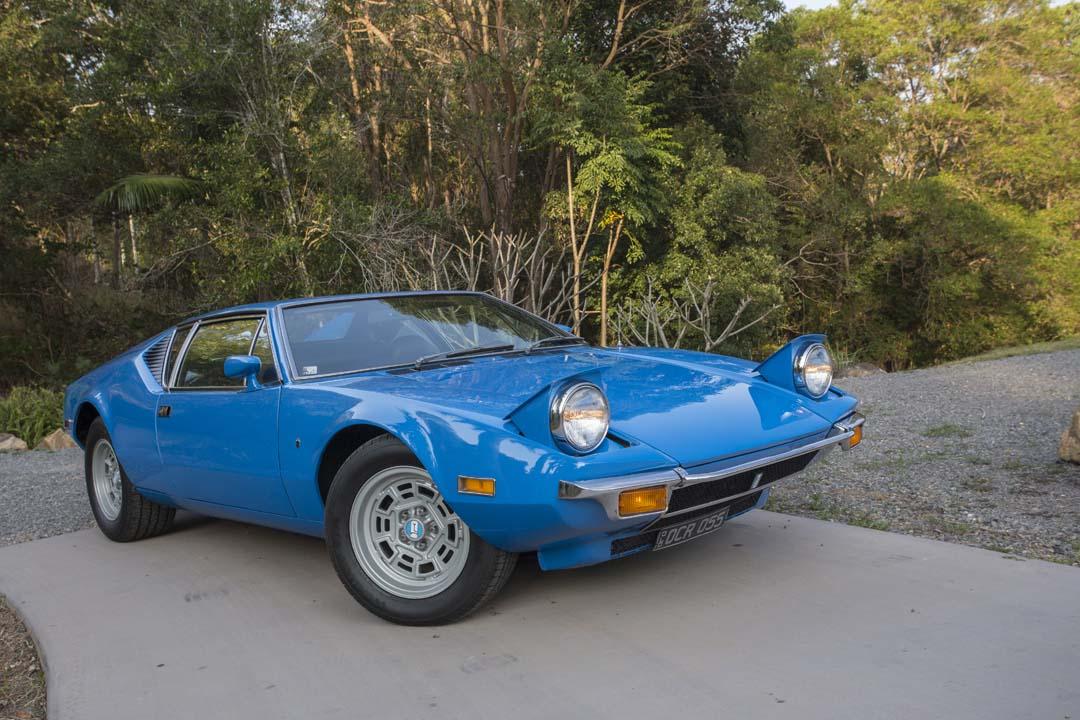 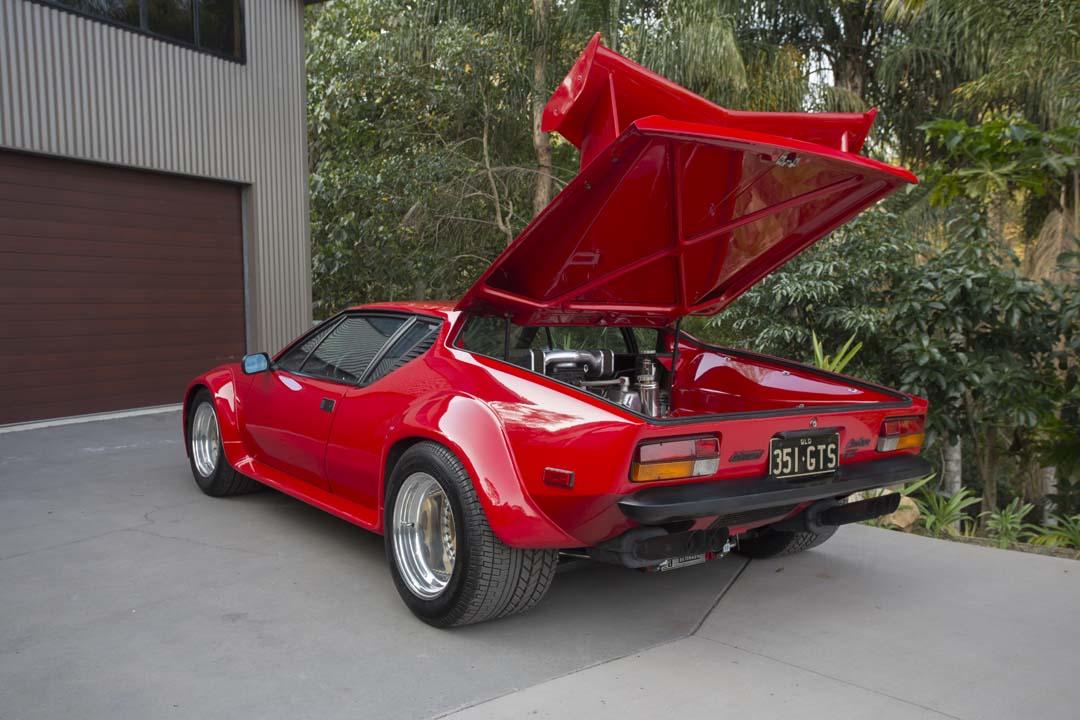 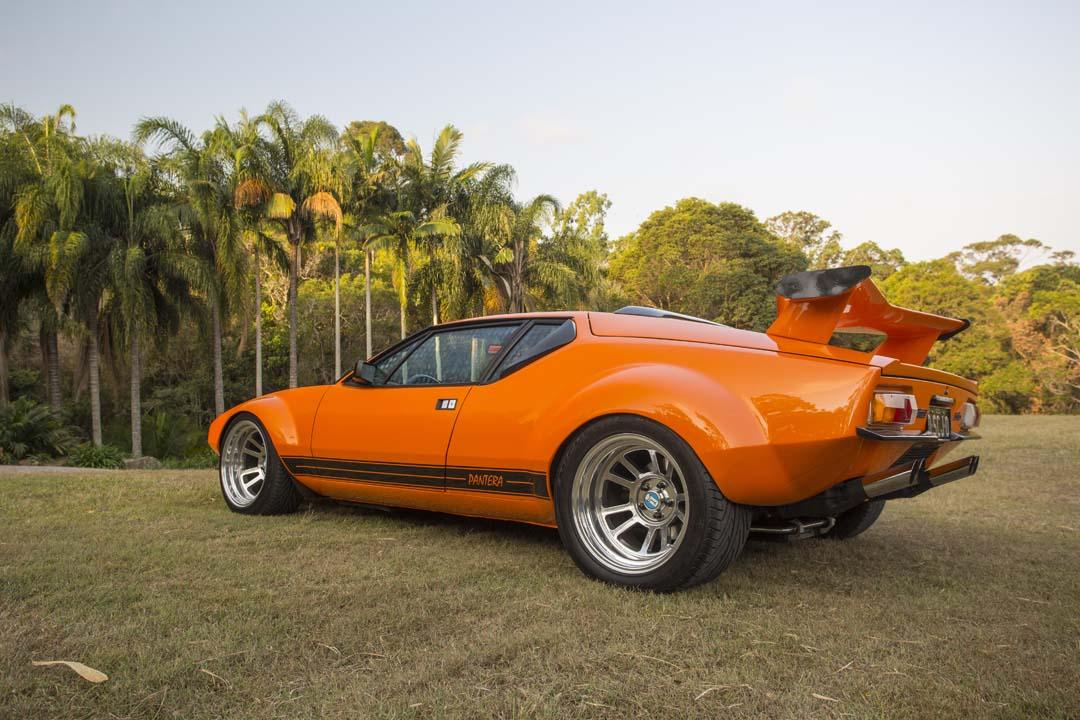 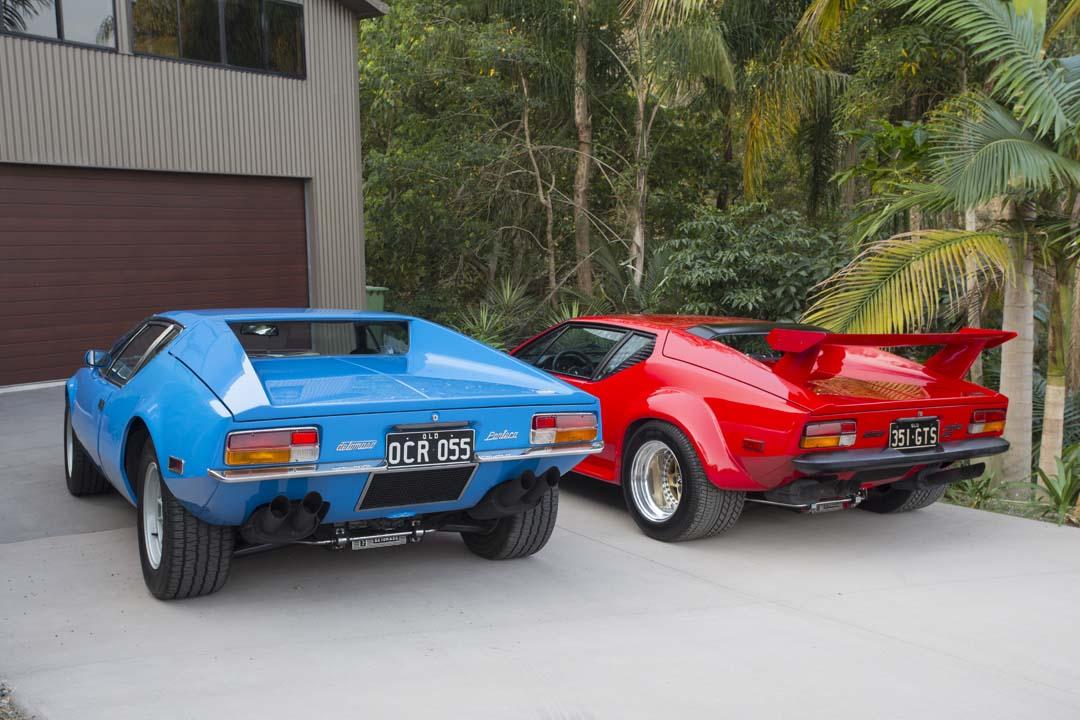 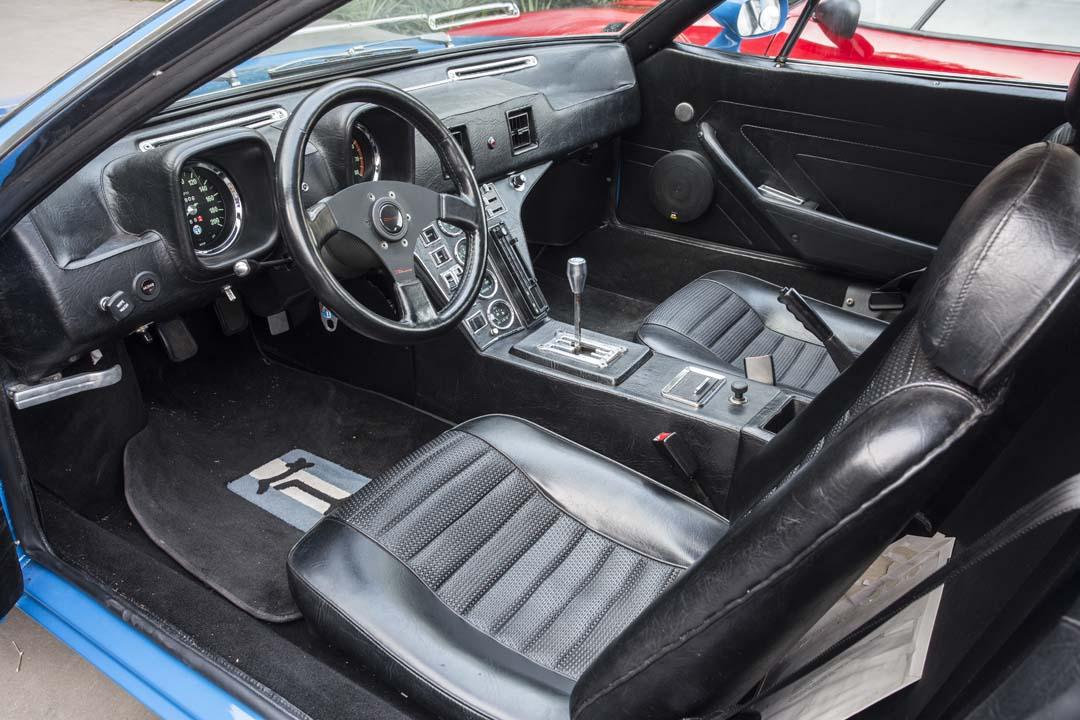 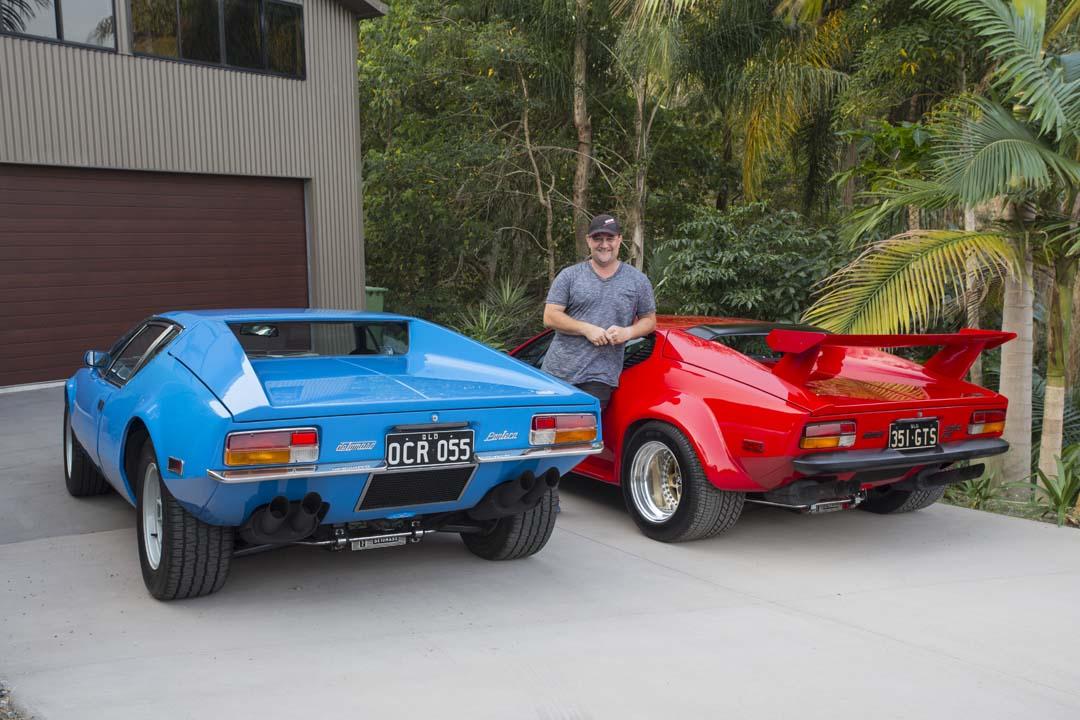 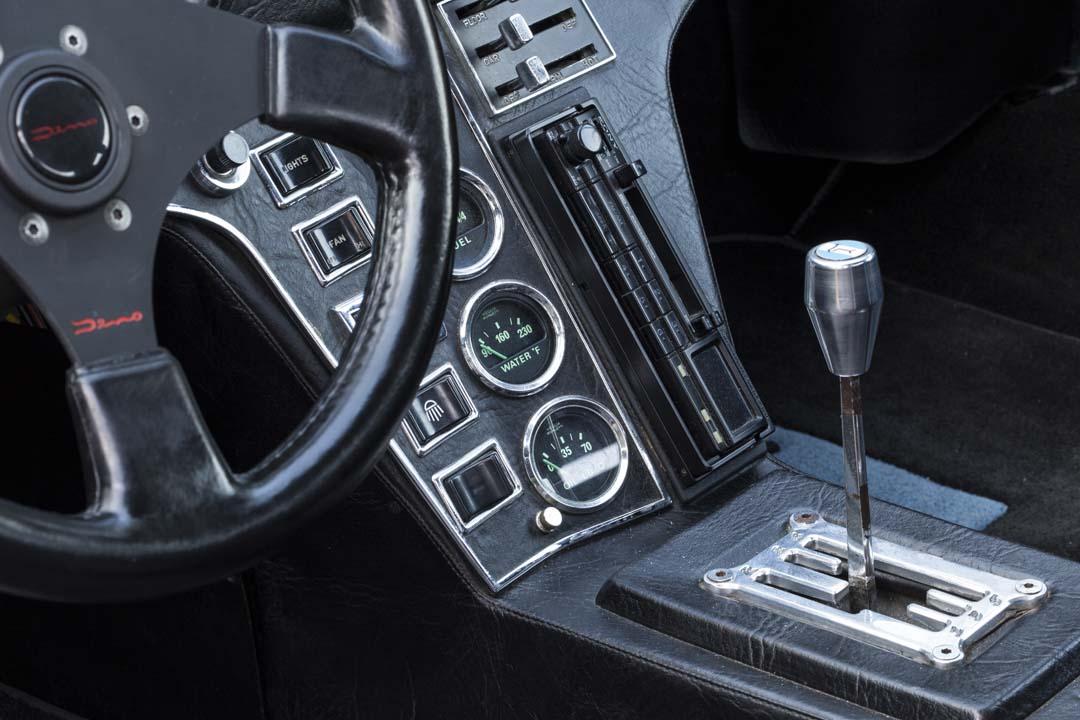 Dave said the car was rust free - rare as these early De Tomasos are prone to rot – and he hasn’t needed to touch it mechanically. It was registered and on the road within a week. “It was completely original so it was debatable whether we’d have the outside painted,” he said. “But it was 45 years old so it had all the nicks, rubs and fades, and we just wanted it fresh.” The original blue colour – a kind of Ford Grabber blue – was repeated on the body, and today, as you can see in the pictures, it presents immaculately.

Fortunately it isn’t adorned with the later Pantera’s cumbersome black safety bumpers, looking much cleaner with its barely-there skinny chrome items. With pop-up lights down it is at its wedgiest (with lights up Dave calls it a bit goofy), but it is from the rear it looks most wonderfully supercar.

The cover over the mid-mounted engine is almost impossibly long, wide and angular, while an upswept back end dramatically exposes the angled quad exhaust system.

The black cabin is unrestored yet has barely suffered for its 45 years. A few creases in the seats and some light fading on the switchgear show it’s been used, but also well cared for: there’s no hint of a crack in the dashboard, while the original Veglia instruments still have their luminous glow.

The racecar driver behind the Pantera was Italian-based Argentinian Alejandro De Tomaso, and the blue and white Argentine flag colours adorn the dials, gearshift knob and even the original floor mats. The only hints at some later updates are a more modern Sony radio (mounted as per original on its side) and a Dino steering wheel.

It is certainly a cosy cabin, and the pedals in this left-hand drive car are offset far to the right thanks to the encroaching wheel well. But you sit sportily low, the metal gate around the dog-leg shifter is wonderfully of its era, and there’s nothing quite like having a thumping V8 mounted almost right beside you.

Speaking of that Ford V8, as Dave is owner of a DeTomaso-rivalling Ferrari and Lamborghini, what are his thoughts on the Pantera’s American heart? “I think it was entrepreneurial to use the Ford V8 engine,” he said. “DeTomaso himself was a race driver essentially and he’d seen what Carroll Shelby had done with the AC Ace by putting a Ford V8 in to make the Cobra. He’s done the same thing here in using a big American V8, but this time in an Italian car. It helped the production, it made them very affordable for a supercar, and they sold a hell of a lot in the US.”

They’re also far easier to live with than other Italians said Dave, who does the bulk of the maintenance work in his exotic stable. “The Pantera is the most affordable to maintain certainly. Anything with Ferrari or Lamborghini written on it, you have to move the decimal point the wrong way. With the Lamborghini I have a fella up the road who used to work for them, and if you don’t have a contact like that you’re going to be paying through the nose. That said, all supercars have their problems. They’re like supermodels I suppose. They all have their maintenance plans.”

The 351 cu in Cleveland V8 is one of the most commonly used engines both in America and Australia, so Dave said parts are everywhere. And it’s clear he has huge affection for his Panteras. “I can’t seem to get my bum out of the orange one; I go everywhere in it,” he said of his wider-arched De Tomaso. “It’s a bit more racy and has more comfortable seats, plus the air conditioning works.”

All Panteras came with air conditioning as standard, but it needs re-gassing in the blue car here. “And you really need it,” Dave said. “Getting in and out of these is difficult and it’s a tight cockpit.  There’s a hump between the middle of the seats and that’s your motor right there. It can transmit a lot of heat, and with two people inside it can get stuffy really quickly.”

As for the drive itself, Dave has nothing but praise for his very original Pantera. “It’s beautiful, raw and powerful, and while it’s certainly fast there’s nothing unpredictable about it. I’ve had no huge problems keeping it on the road through the corners,” he said with a smile. “The centre of gravity is extremely low so it handles very well, and once you get used to the gear shifter gate and the fact it’s a dogleg ‘box you can have great fun.”

The plan is to simply maintain and enjoy this original Pantera for now, but Dave admits he’s having an arm wrestle with his wife on whether to sell it or not. “We’ve got three Panteras, and do you really need three?” he asks almost rhetorically, as few others must battle this specific dilemma. “The blue one is my wife’s favourite, so she’s keen for us to hang on to it.”

As this graceful 1972 Pantera sits in the early evening soft light overlooking the twisting hinterland driving roads where Dave exercises his steeds, it’s hard to imagine parting with this Italian delight. Then the American V8 is fired up (it started first time incidentally), and the rumble is intoxicating. Perhaps there is reason to own three of these mid-engined beauties after all.