Looking for a car that’s different? Look no further than a Clénet.

If you’ve never heard of a Clénet, you’re not alone, as they’re a rare sight in Australia.

First thing to get your head around with the Clénet (pronounced Clen-Ay) is that it is a product of the 1970s, even though it looks more than three decades older.

The second thing is that the Clénet is no kit car. It was a low-volume production vehicle, built using the best materials and finished to a high standard. 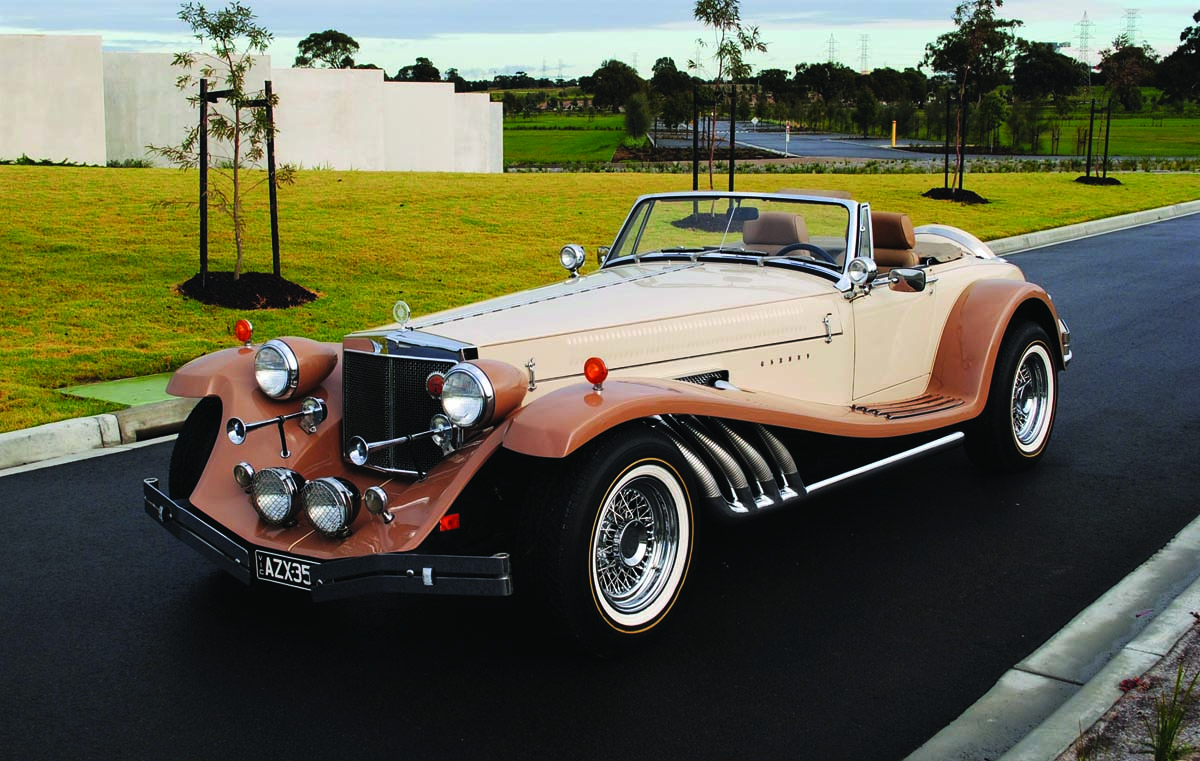 The Clénet is regarded as a neo-classic car – a short-lived and mostly American automobile category that combined the look and style of cars from the 1920s and ’30s with modern chassis and running gear. 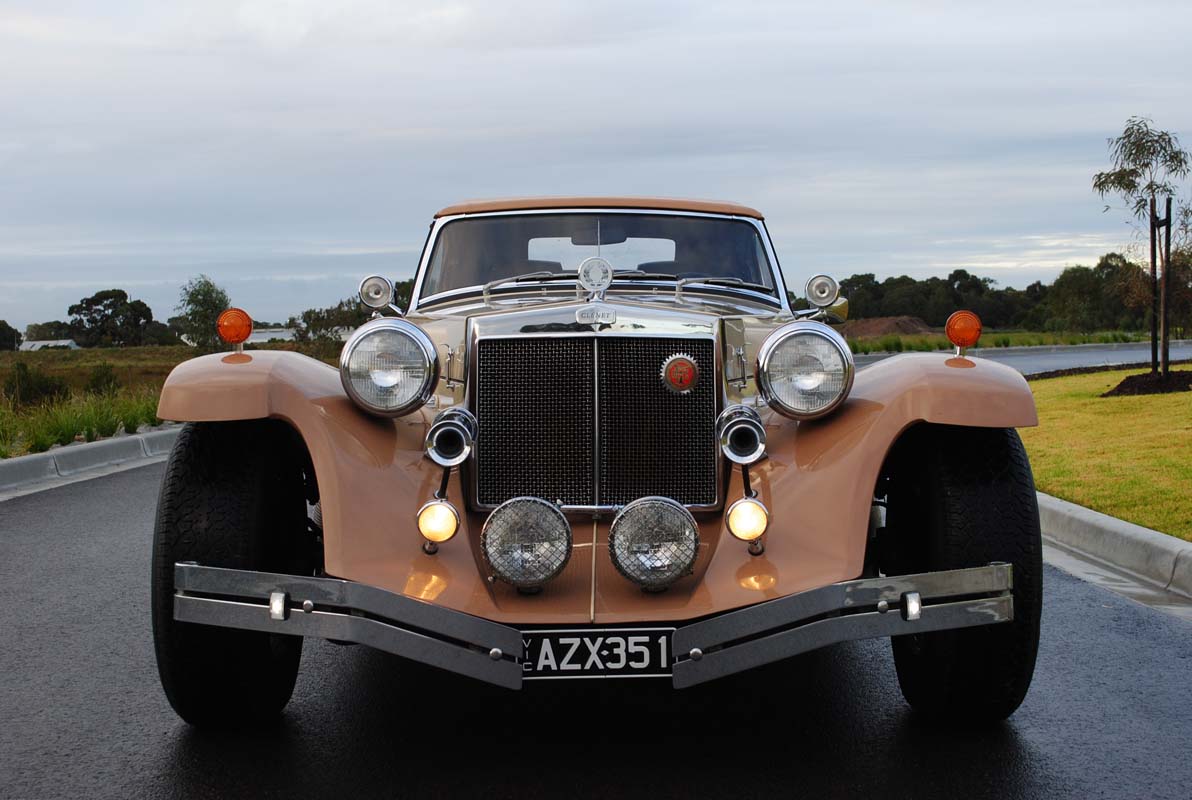 From the 1970s into the mid-1980s, there was a small industry in neo-classic cars, but the category can trace its origins to 1964, when the Excalibur SS was released. Designed and built by Brooks Stevens, who had worked for Studebaker, the Excalibur was inspired by the Mercedes-Benz SSK of the 1930s. Studebaker chassis and running gear was used initially, then Chevrolet Corvette components.

Surprisingly, the Excalibur had no competition for the better part of a decade, but the early 1970s saw a resurgence of interest in everything from the ’20s and ’30s, as evidenced by some of the most successful movies of that period, namely The Sting (1973) and The Great Gatsby (1974).

Clénet was one of many companies to tap into that interest, with others including Sceptre, Zimmer, Baci, Classic Tiffany and Centaur, to name a few. Some of these creations were crude and others just plain ugly. Some were sold as kits to build off a VW Beetle platform, but the Clénet was only ever offered as a complete, turn-key car. It was built to a higher standard than the majority of its competitors, too.

The car’s creator, French-born Alain Clénet, had worked as a designer at American Motors before striking out on his own. Interested in cars of the ’30s, Clénet had the means to design and build a modern version, thanks to the support of investors. Establishing Clénet Coachworks in California in 1975, Clénet released a prototype in 1976. Response to this exceeded expectations, with dozens of orders leading to production of what would be called the Series I roadster. 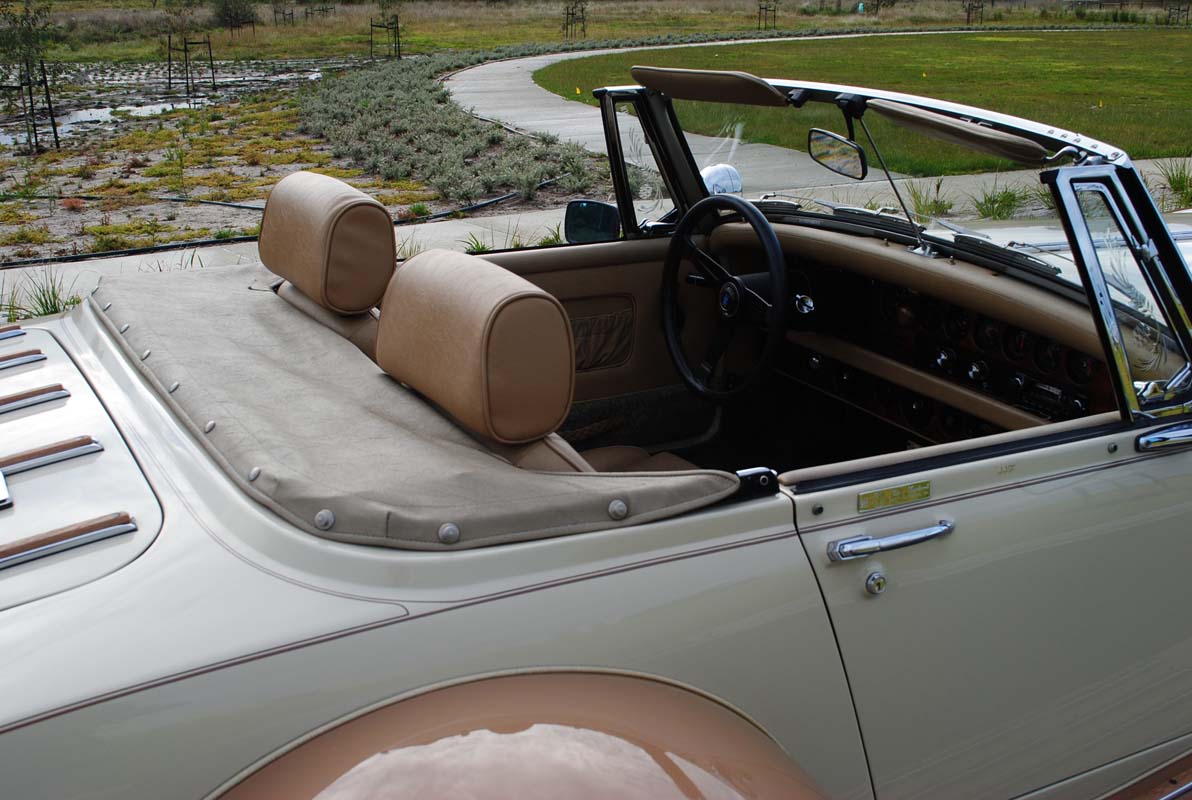 With its low-slung body, long bonnet and rear-mounted spare wheel, the Clénet Series I looked ritzy and exclusive. It was certainly a “look at me” car, which its target audience – mainly the Hollywood elite, various other entertainers and sports stars – had no problem with. To add to the exclusivity, Clénet announced that only 250 would be built.

While elements like paint and detailing varied from car to car, common to all was a Ford drivetrain and a two-seat passenger cabin from an MG Midget, although neither source materials were immediately apparent. This curious amalgam was the result of the reliability of modern Ford running gear and the glut of late-model MG Midgets in the US market at the time. 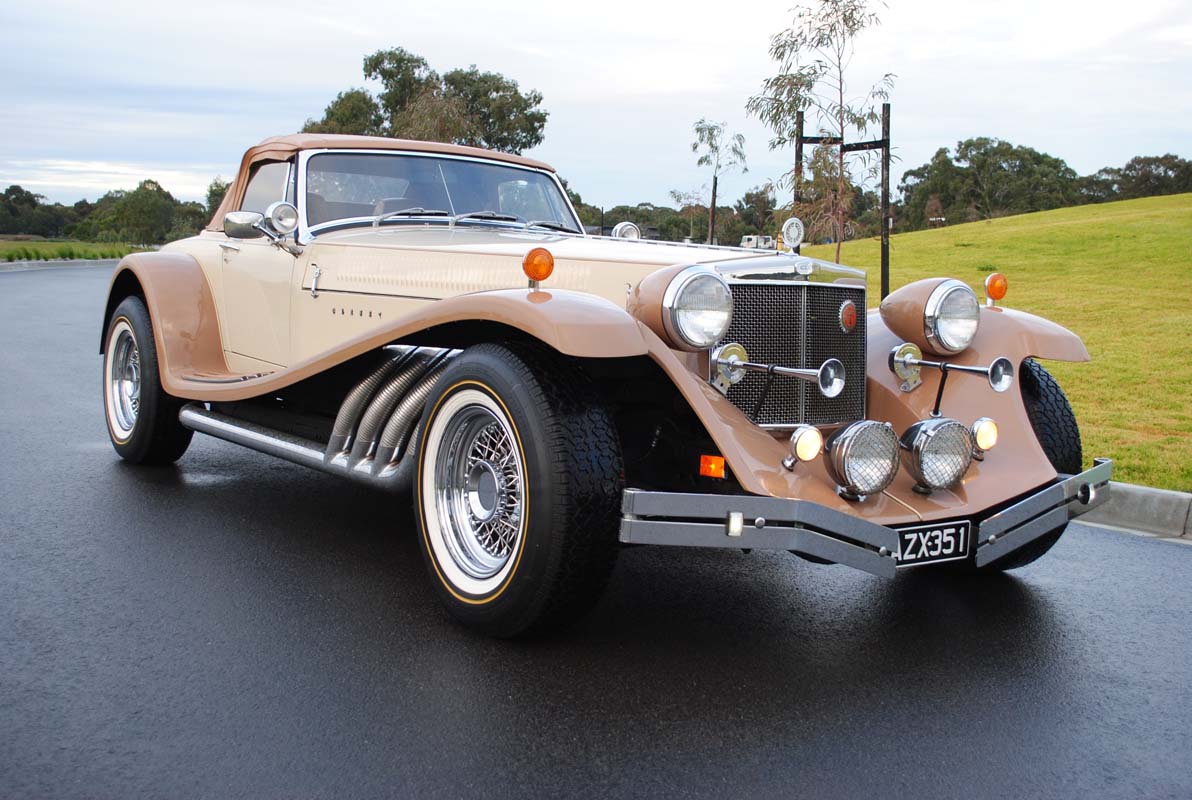 The initial Clénet Series Is were based on a Lincoln Continental Mark V, including that model’s engine, automatic transmission, brakes, suspension, chassis components and even its wire wheels. Later cars used Mercury Cougar components. The MG Midget parts were limited to the cockpit, including the doors, side glass, windscreen and folding hood.

Wrapped around this was a body hand-built by Clénet, consisting of steel panels for the bonnet and cowl sides, with fibreglass for the mudguards and rear boot surround.

Inside the compact cabin, plush bucket seats were an upgrade on what was normally found in a Midget, with the rest of the trim upgraded, too – Connolly leather, lambswool carpets and a walnut dash were all standard. A Nardi steering wheel was a common feature, as was a crystal ashtray set into the transmission tunnel in place of the shifter, which was relocated to the dash. The Lincoln’s power steering and air conditioning, along with a premium C1970s sound system, completed the interior fitout.

Each Series I took around 1,600 hours to build, which explains why it took three years for Clénet to complete the planned 250-unit run. But it only partly explains why the starting price - around US$25,000 in 1976 - had ballooned out to more than US$65,000 in 1979 when the car shown here was completed. 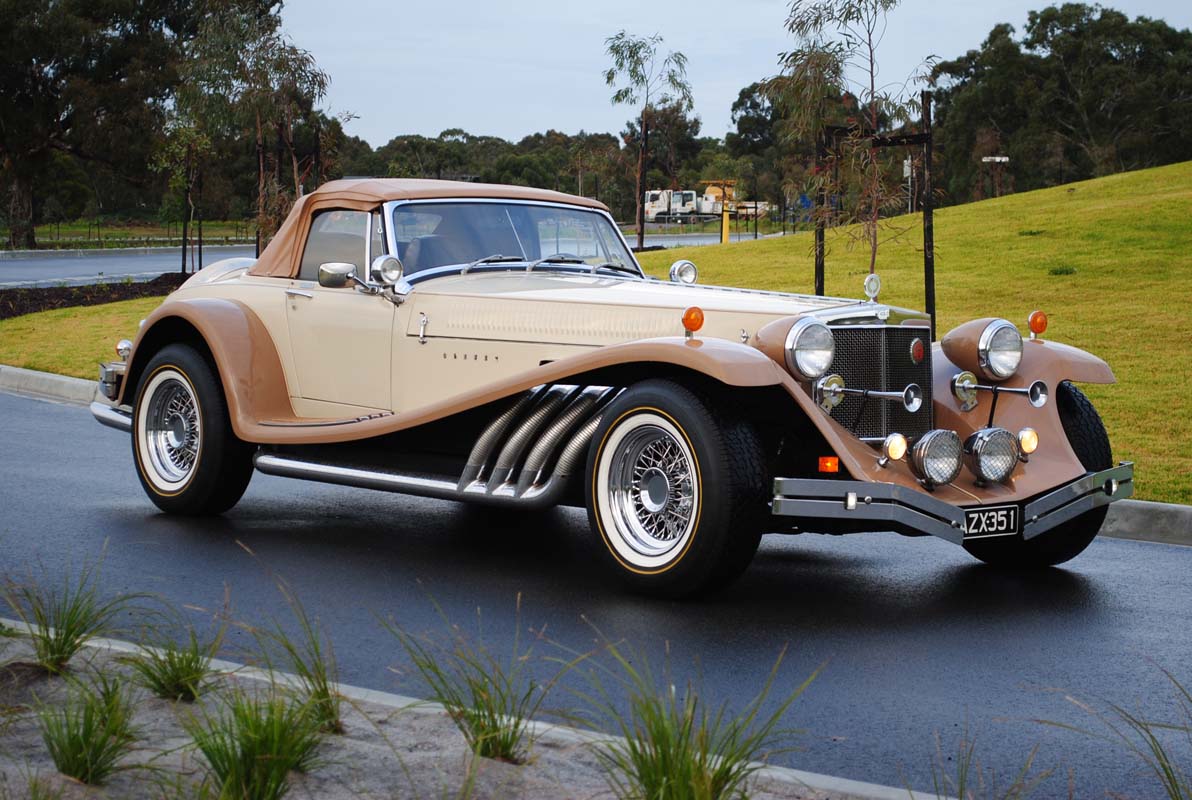 Despite this, Clénet sold all 250 Series I cars and announced a ‘Series II’ four-seater follow-up in 1979, of which 500 would be built. The wheels started to fall off Clénet’s operation soon after, though, eventually leading to bankruptcy in 1982. A former Clénet employee recommenced production in 1984 with some new designs based heavily on the Series I, but only a handful were built before operations wound up for good sometime around 1987.

Today, Clénet cars have a small but devoted following, with a Classic Clénet Club and owners all over the world, mostly in the US but including a surprising number in the Netherlands. Only two are known of in Australia, though, including the car pictured.

The owner of this Clénet, Emilio Giannarelli, has owned a large number of American cars, mostly from the 1950s and including Corvettes, Thunderbirds, Cadillacs and Chryslers. 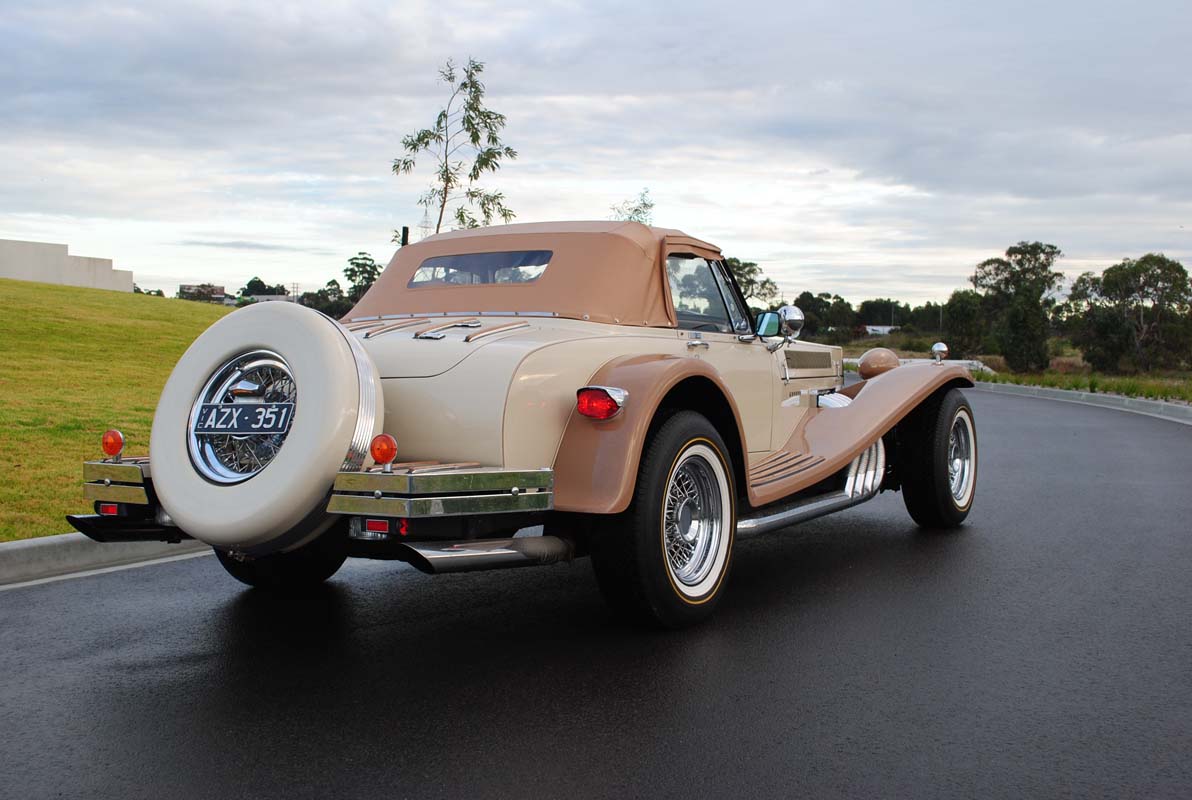 Emilio says he saw this Clénet Series I, Number 206 of the 250 built, advertised online in early 2019 and was immediately drawn to its style and caramel and cream colour combination. The one-family-owned car was located in Palm Springs, California, with only 12,900 miles on the odometer.

Upon arrival in Australia, the car proved to be accurate to the seller’s description, but needed some minor additions to achieve local compliance, including repositioned parking lights and new seat belt supports. 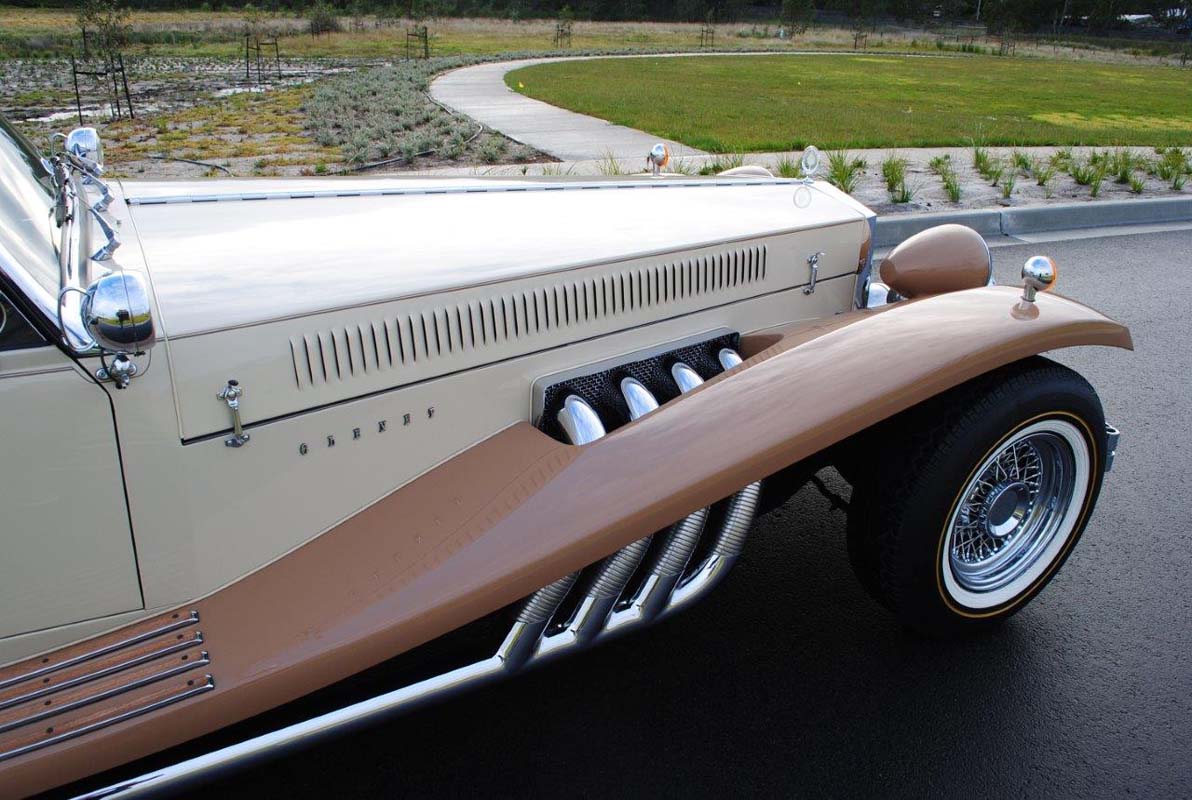 Since it was complied and registered in May, 2019, Emilio has taken the Clénet to hot rod events and car shows, ensuring it gets a run every month to keep things fresh. He’s put 700 miles on it in the time he’s owned it, but is now looking for something new, so has it on the market.

This Clénet Series I combines classic looks with newer Ford underpinnings, so it’s reliable and parts are easy to get.

Emilio has done all the hard work of importation and compliance, so there’s nothing for the new owner to do but drive and enjoy.

This ultra-rare car is in outstanding original condition and runs well, with full Victorian registration to December, 2021.

Asking price is $120,000. A very rare, factory-option hardtop is included in the sale.

For more details, look for the advert in this issue or see more online at justcars.com.au with the ad code JCW5194692.