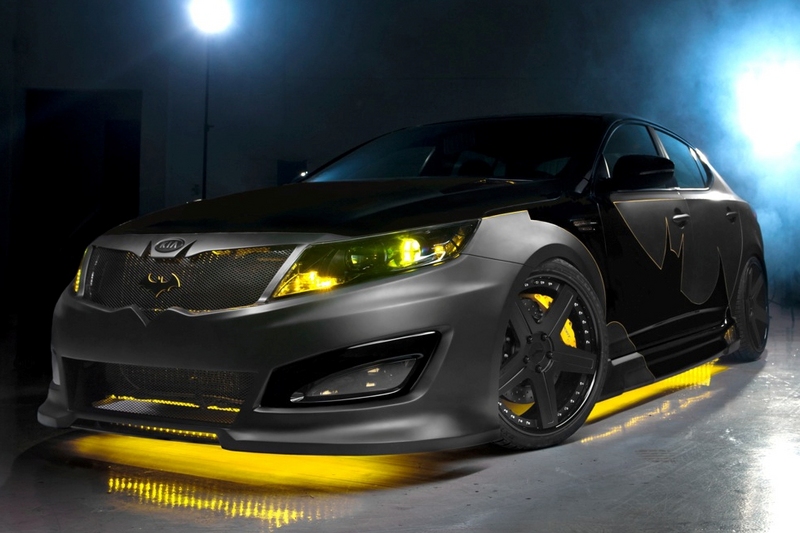 Legendary DC Comics artist Jim Lee and RIDES Magazine (US) were responsible for adding a bit of 'The Dark Knight' to a Kia ...
Think 'Batmobile' and not many of us would think of a Kia, but that's the brand behind a new series of vehicles created as a joint venture between Kia Motors America, RIDES Magazine and DC Entertainment.

Legendary DC Comics artist Jim Lee and RIDES Magazine (US) were responsible for adding a bit of 'The Dark Knight' to a Kia, with the Batman-themed Kia Optima sedan the first in a series of eight vehicles released in conjunction with the DC Comics 'Justice League' series over the next 10 months.

The vehicles are also being created to raise awareness for the 'We Can Be Heroes II' charity campaign fighting famine in North Eastern Africa.

Working together, Kia, DC Entertainment and RIDES magazine designed and built the Batman-themed Optima, transforming the exterior with a matte- and piano-black paint scheme, a dramatically lowered coilover suspension and ground effects kit.

Other exterior modifications include a custom front grille shaped like a batwing that took over 40 hours to create, yellow LED lighting accents throughout the vehicle and the iconic bat signal etched into the HID headlights.

Moving beneath the 'cape', the Optima's seating surfaces are wrapped in custom black leather and suede with yellow accent stitching. A Bat suit and cowl is mounted in the boot, with utility throwing stars in the centre console.

To push the We Can Be Heroes II message, the Batman-themed Optima will feature video screens in the headrests, which will run videos on the famine crisis in the Horn of Africa, and what people can do to help - how one act can make anyone a hero.