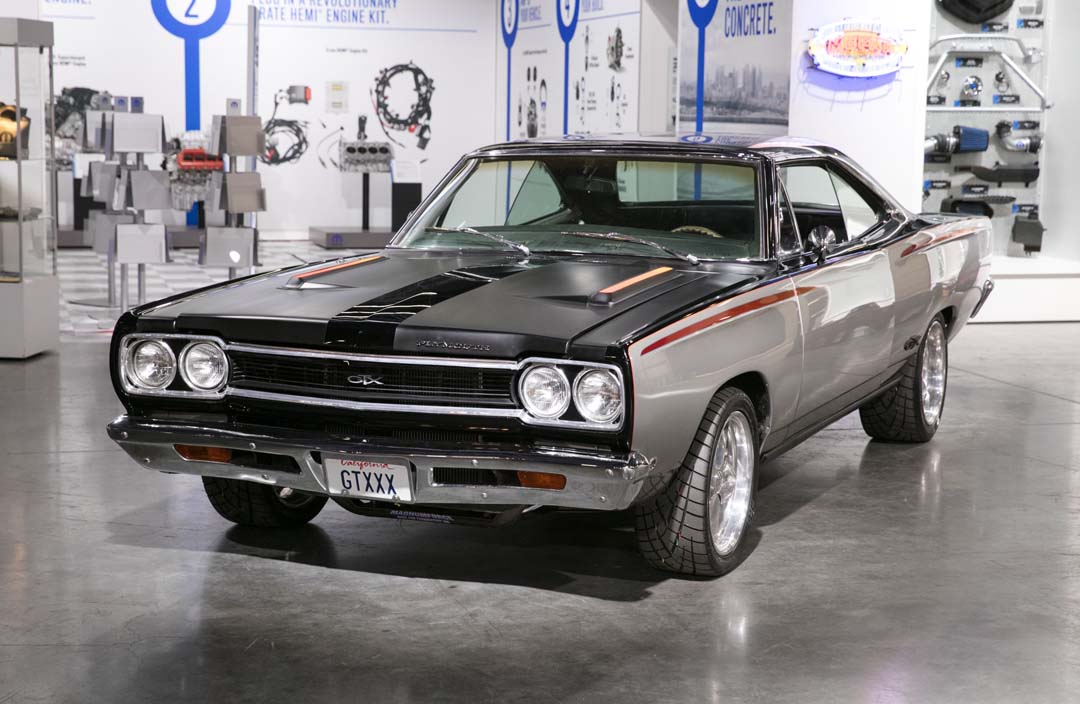 Chrysler’s Mopar division always turns on something special for SEMA and this year was no exception.

Dubbed the “Hellcrate”, the 6.2 V8 puts out a claimed maximum 707 horsepower and 650 lb/ft of torque (527kW and 881kW). Optimised for use with manual transmissions, this is the first supercharged engine to be offered by Mopar in crate form.

“Never before has a supercharged, factory-direct 707-horsepower crate engine kit been offered, and we are proud to be the first to deliver a solution enthusiasts have demanded,” said Pietro Gorlier, Head of Parts and Service (Mopar), FCA. “This ultimate powertrain option fits the needs of owners and fans who demand iconic performance.”

Additional to the engine, which costs US$19,530, is a US$2,150 Hellcrate Hemi engine kit, which includes essentials for the supercharged donk, including a powertrain control module, power distribution centre, engine wiring and chassis harnesses, oxygen and charge air temp sensors, fuel pump control module, ground jumper and even a new accelerator pedal.

A non-essential extra is the Mopar Front End Accessory Drive (FEAD) kit, which includes an alternator, belts, pulleys and other parts.

Described by Mopar as relatively simple to install, the Hellcrate Hemi engine and complementary kit are intended for pre-1976 street and off-road vehicles and comes supplied with full installation instructions and helpful tips.

To showcase the new Hellcrate at SEMA, Mopar turned to Graveyard Carz; the Oregon-based car restoration specialists who also collaborated with Mopar in building the ’71 Plymouth Hemi ‘Cuda that featured on the Mopar stand at SEMA 2016.

This year, Graveyard Carz’s Mark Worman and his team created a 1970 Plymouth Superbird clone (SUPERcharged, SUPERbird – geddit?!). As the Superbird was designed to take a large V8 from the start, the 6.2 crate Hemi was an easy fit, even with the supercharger. To the new engine, Worman added a modern Tremec Magnum six-speed manual transmission, as well as the FEAD kit.

In all other aspects, the Superbird was authentic to its 1970 factory specs and appearance, thanks to a swathe of reproduction parts from Classic Industries, who teamed up with Mopar last year to provide web, technical and parts location assistance for owners of classic Mopar vehicles.

Another piece of classic muscle on the Mopar stand was a 1968 Plymouth GTX, owned by US TV personality, Chris Jacobs.

Originally built by Chip Foose, the silver and black hardtop came to Worman and Graveyard Carz after a small fire had damaged the engine bay. Worman removed the original 440 big block and replaced it with a modern 392ci (6.4-litre) V8 in the form of a Mopar 392 crate Hemi V8 and complementary engine kit. Mopar says this Hemi engine puts out 485hp (362kW) and 472 lb/ft (640Nm).
Like the Superbird clone, the GTX was also fitted with the FEAD kit, along with other Mopar hardware and accessories, like a power steering expansion kit and AC expansion kit.
Jacobs will auction the freshly-rebuilt GTX for charity at the annual Barrett Jackson Collector Car Auction in Scottsdale, Arizona, this coming January.

Also on the Mopar stand was a 1937 Dodge pickup that had been fitted with the 345 crate Hemi V8 and matching engine kit. A 1937 model was chosen in honour of the Mopar parts brand’s foundation year.

As part of Mopar’s partnership with Pennzoil, the timber slats in the pickup bed were painted with the Pennzoil logo, while the display at SEMA saw 30-gallon Pennzoil drums alongside the pickup repurposed to hold drinks. 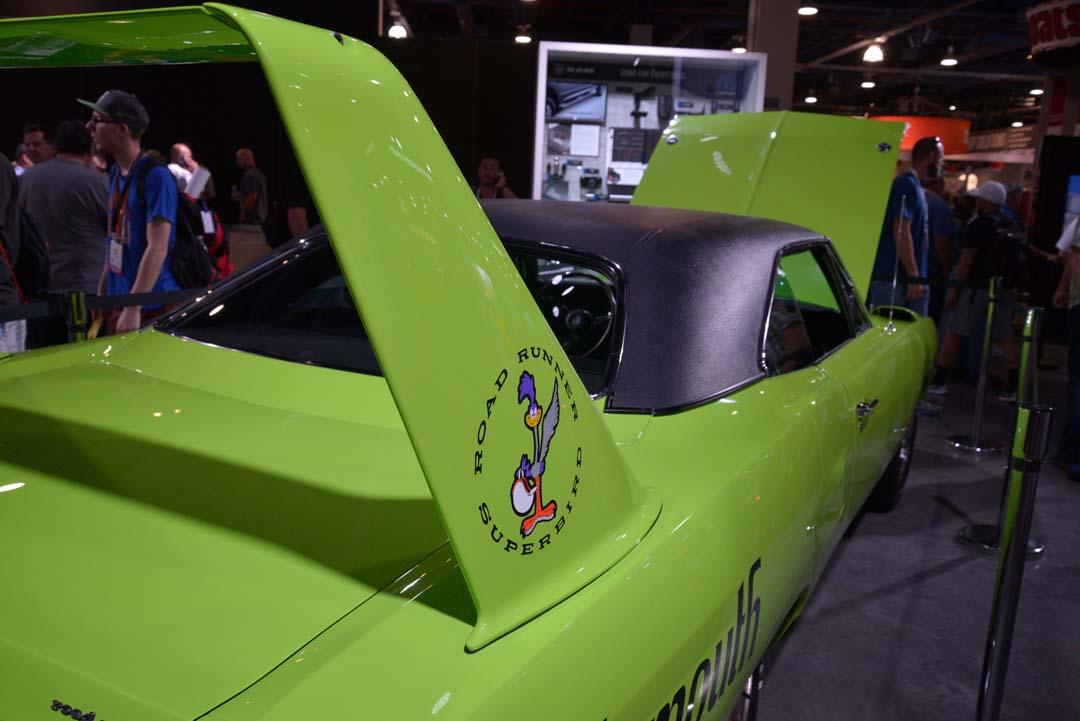 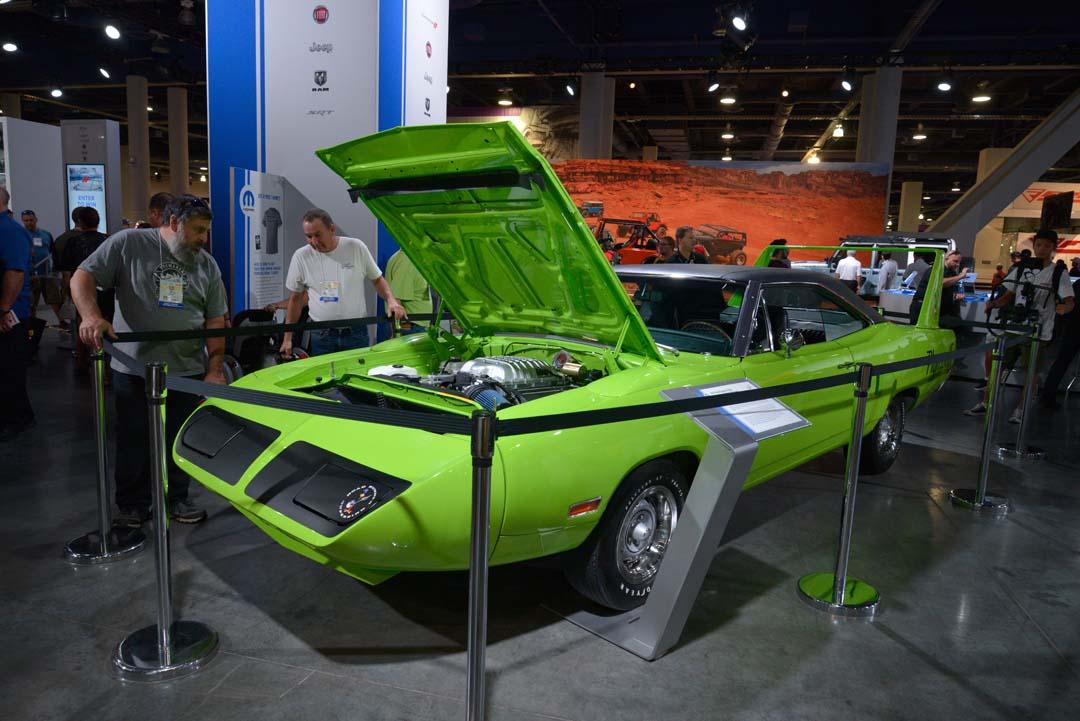 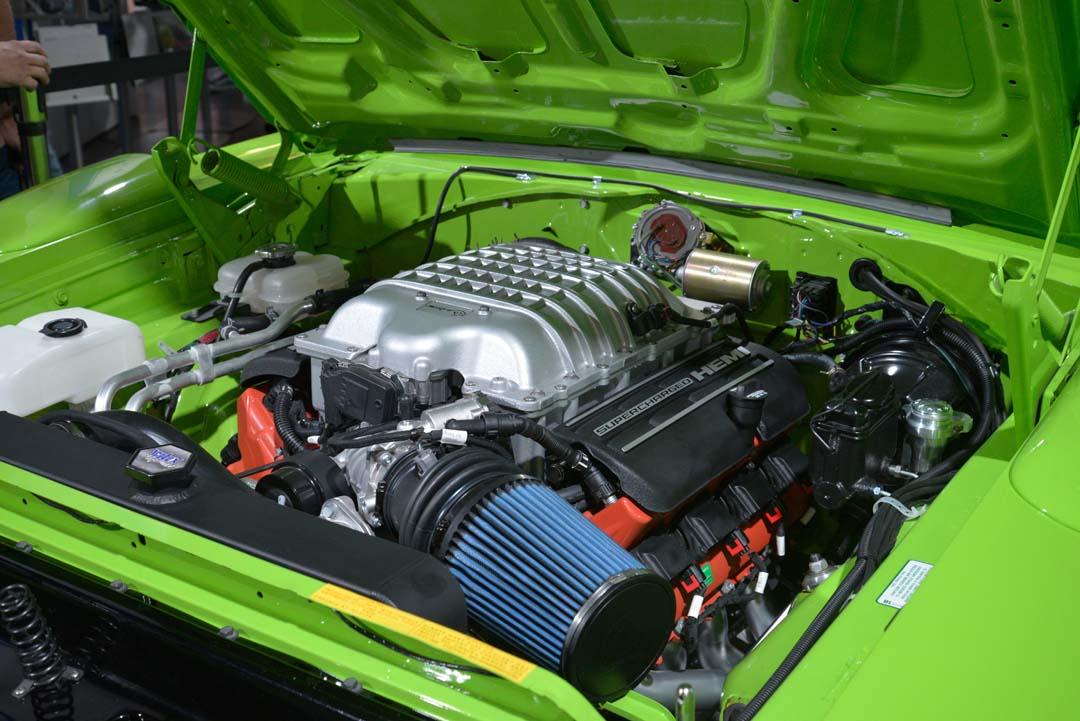 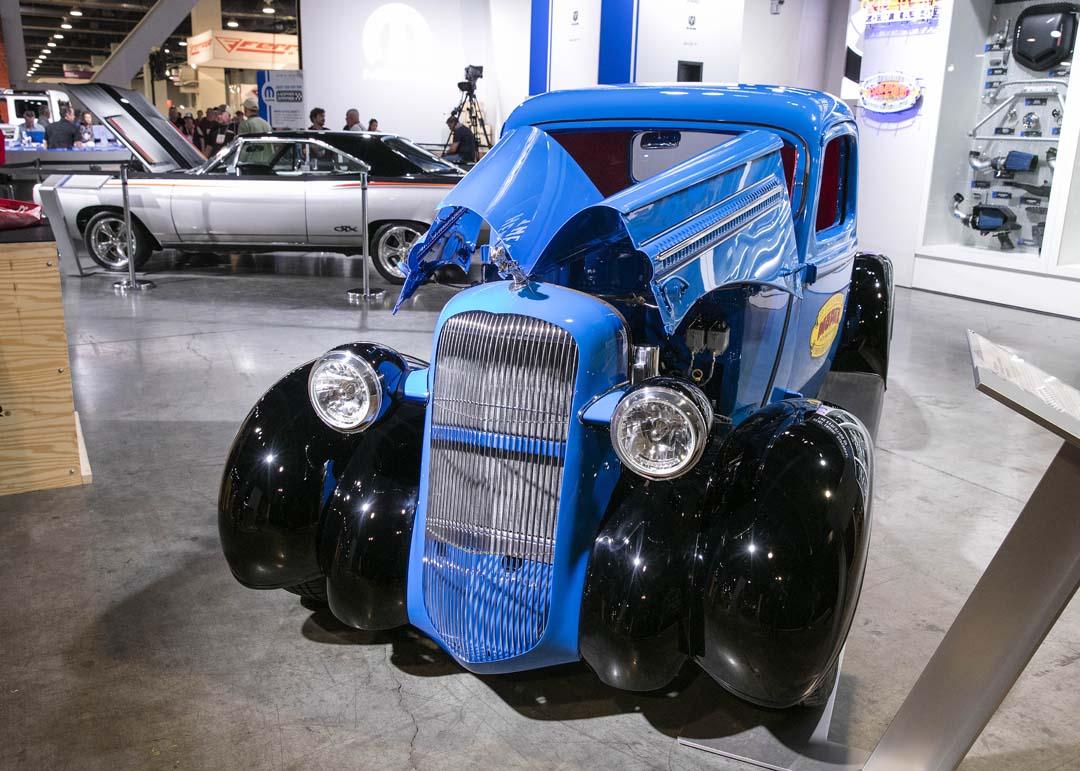 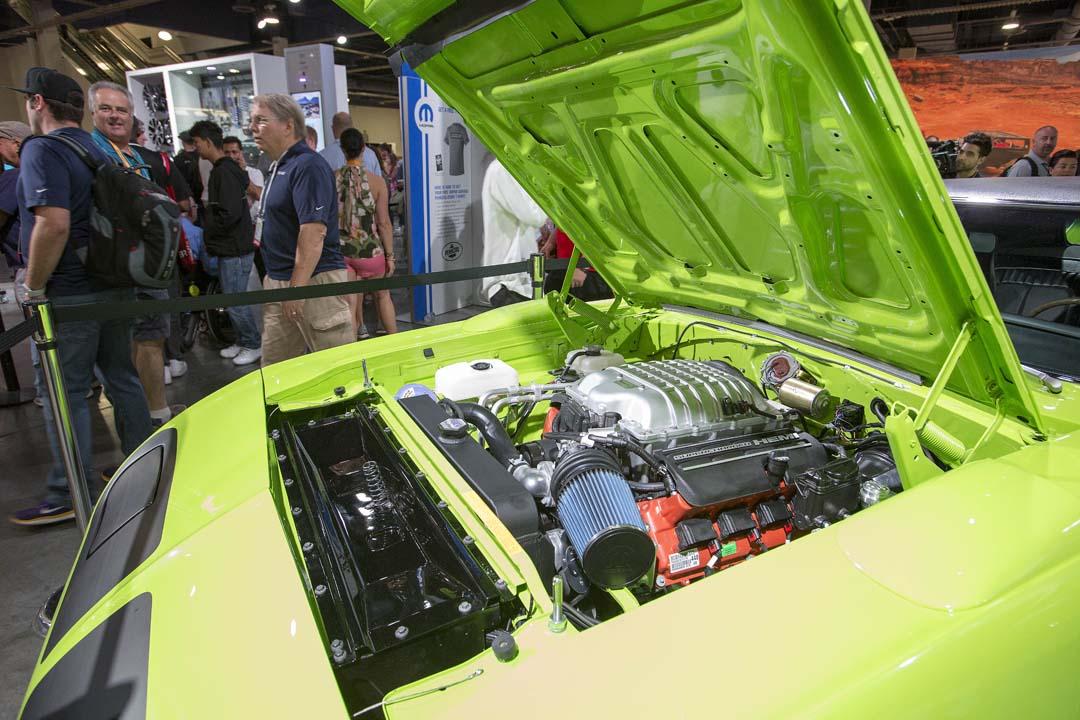 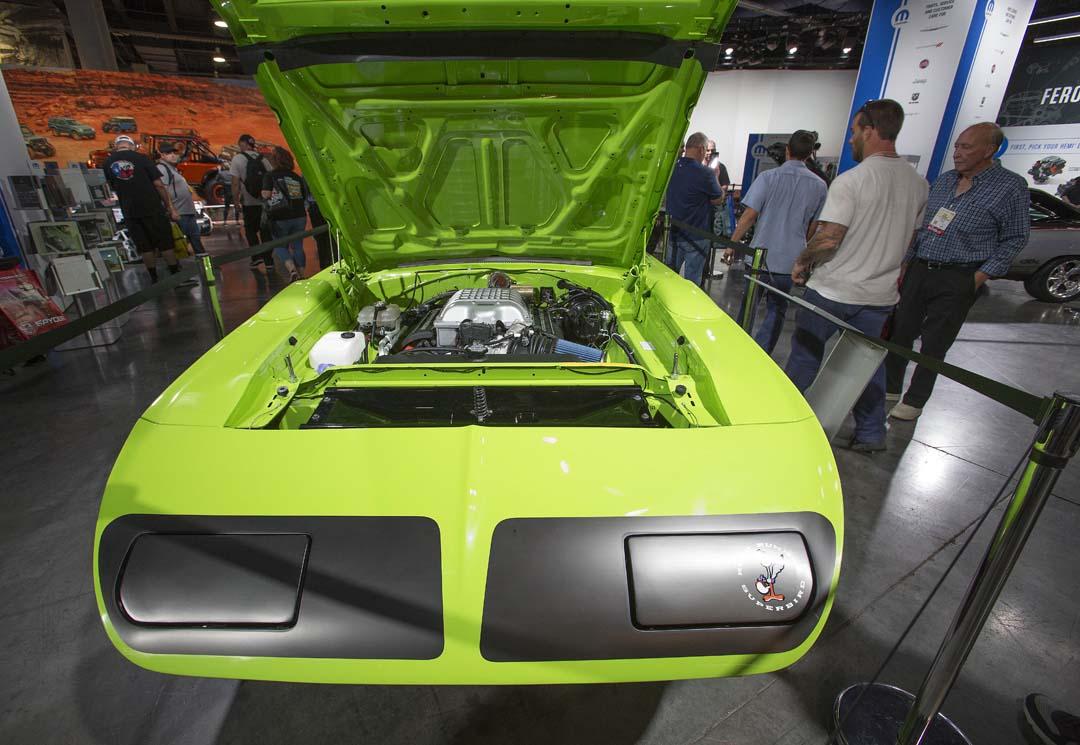 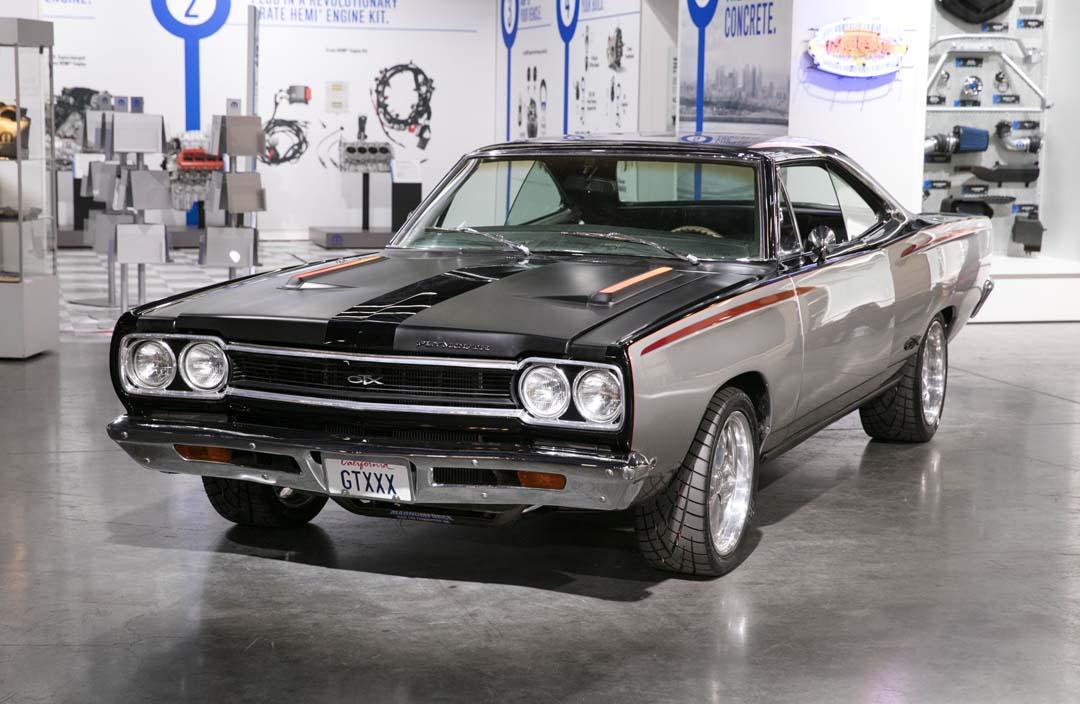 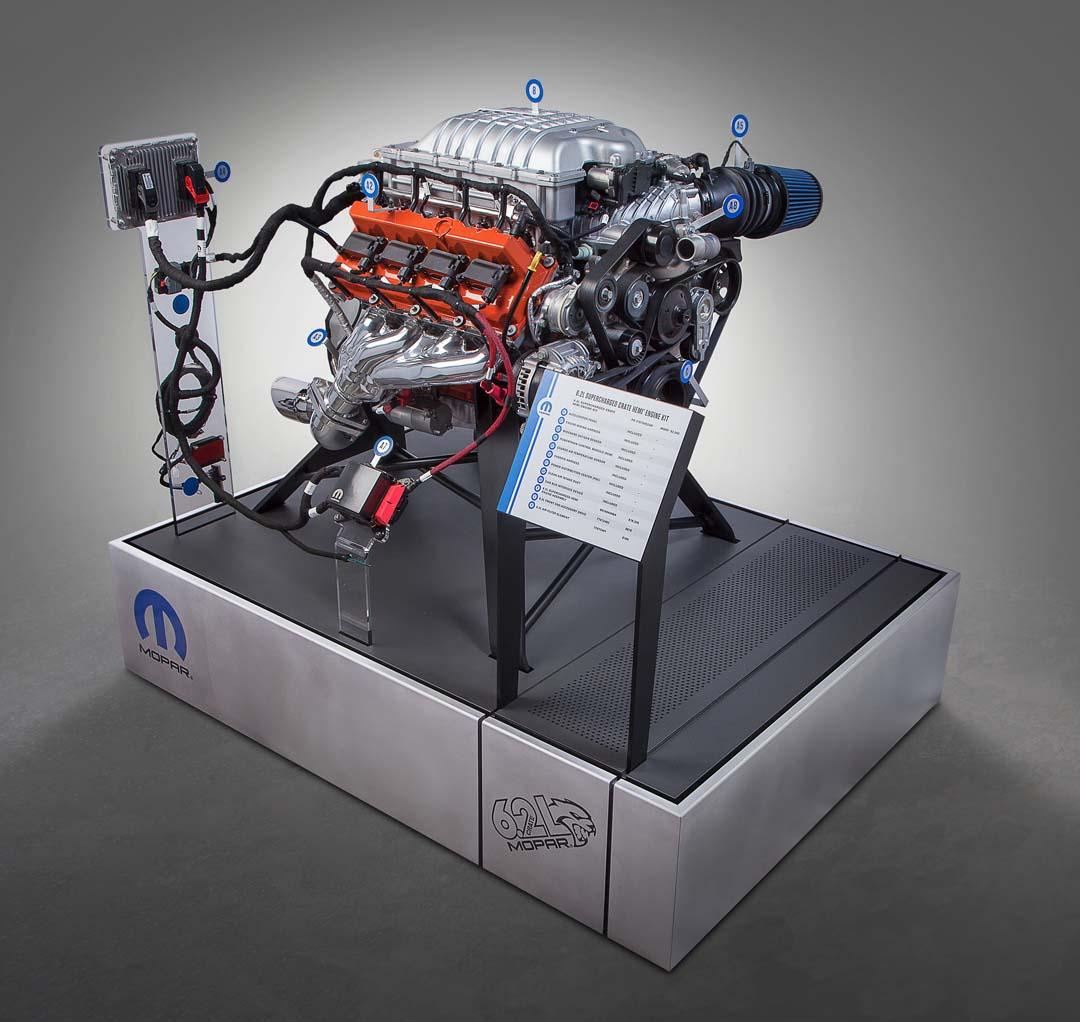 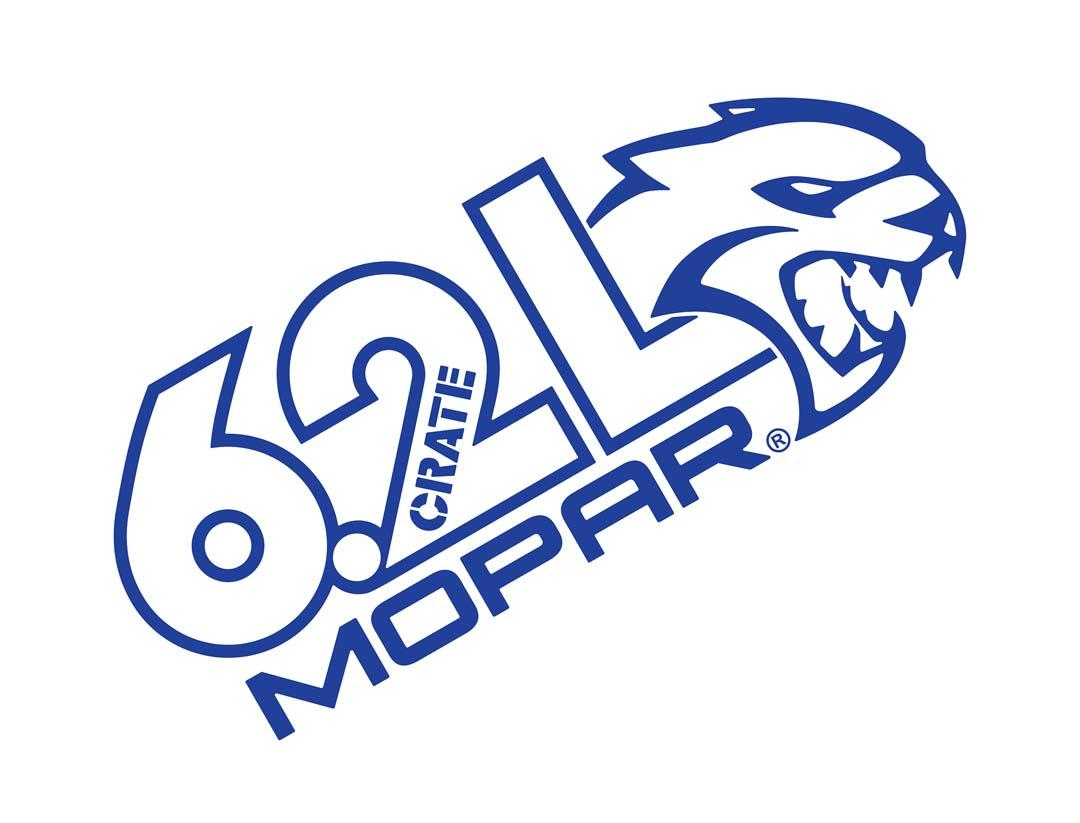