Following its announcement back in August, the improved and upgraded version of Honda’s Civic Type R has arrived.

There has been some confusion over the update, which was originally due for release in October as a 2020 model, but wasn’t officially introduced locally until late December. As such, some outlets are labelling the update as 2021, but Honda’s PR describe it as a MY20 machine.

Regardless, the Type R’s mid-life update offers improvements to the suspension, brakes, cooling and styling. The other key new feature is ‘LogR’ data logging software that has applications for both performance and everyday driving.

There are no changes to the Type R’s 2.0-litre turbocharged four-cylinder VTEC engine and close-ratio six-speed manual transmission, so maximum outputs of 228kW and 400Nm remain unchanged. The front LSD and selectable rev-matching function carry over to the upgrade, too. 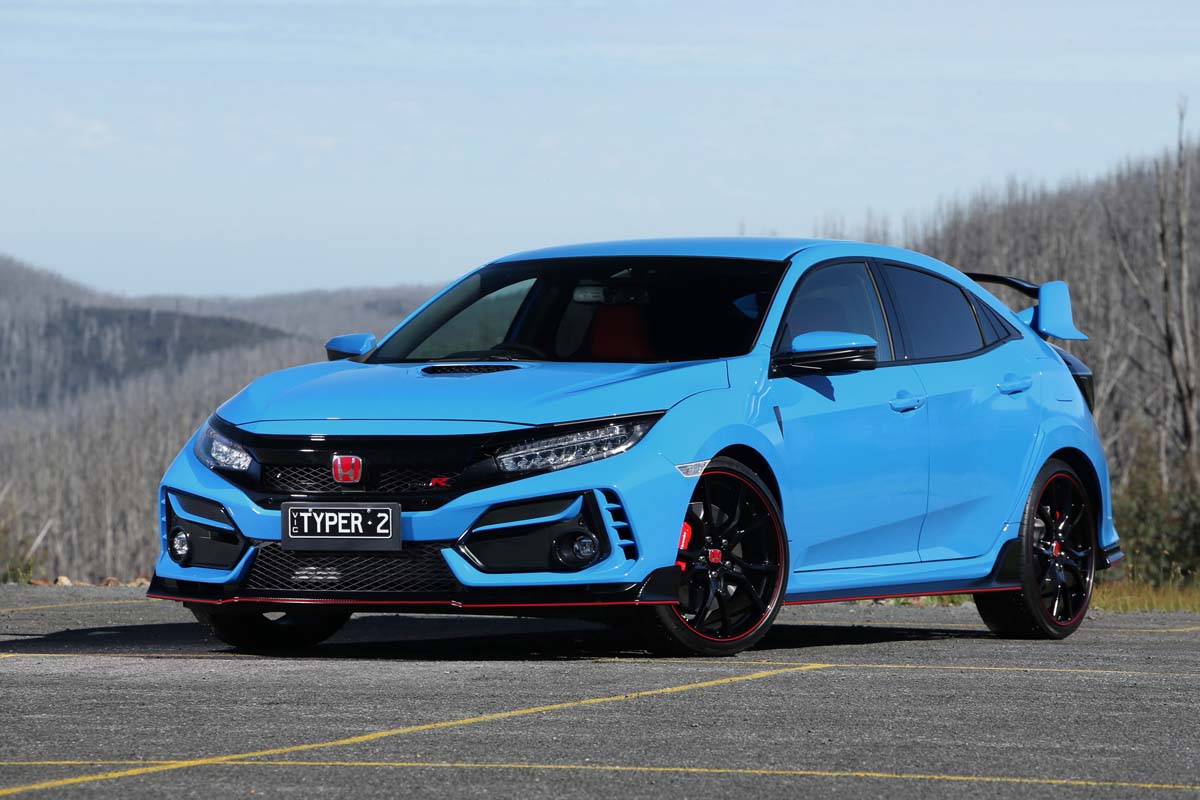 The most obvious change is a new exterior colour scheme, called Racing Blue, which expands the Civic Type R colour palette to four.

Styling changes include a revised grille opening, which is said to enhance engine cooling performance, while the lower fog light surrounds have a new, symmetrical design, incorporating body-coloured styling blades.

At the rear, there’s a refreshed bumper design, with body-coloured styling blades on the outer extraction vents that complement the front-end treatment.

Inside, the steering wheel is now wrapped in Alcantara, as is the boot for the gear shifter, with contrast colour stitching on both. The shifter also features a restyled, teardrop-shaped aluminium gear knob. Inspired by the shift knobs on earlier generations of the Civic Type R, the new design also adds a counterweight to improve shift feel and accuracy. 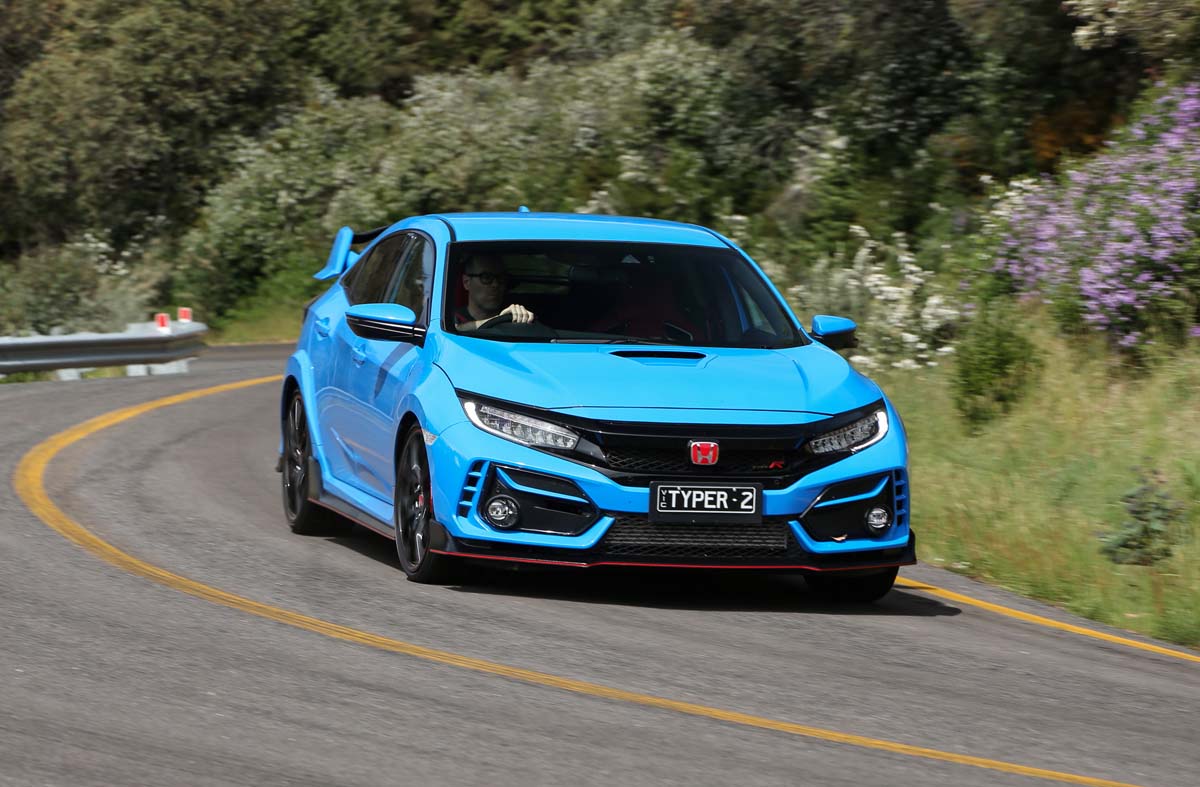 Finally, there’s a new Active Sound Control function that enhances engine acoustics in the cabin when Sport and +R driving modes are engaged, while refining the sound when in Comfort mode.

The aforementioned new grille design increases the overall intake aperture by 13 per cent, while the radiator’s core has been updated. Combined, these changes decrease coolant temperature by a claimed 10 degrees in high-demand situations, like track day driving.

Loss of aerodynamic efficiency from the larger grille opening has been countered by a revised front under-bumper air dam design. 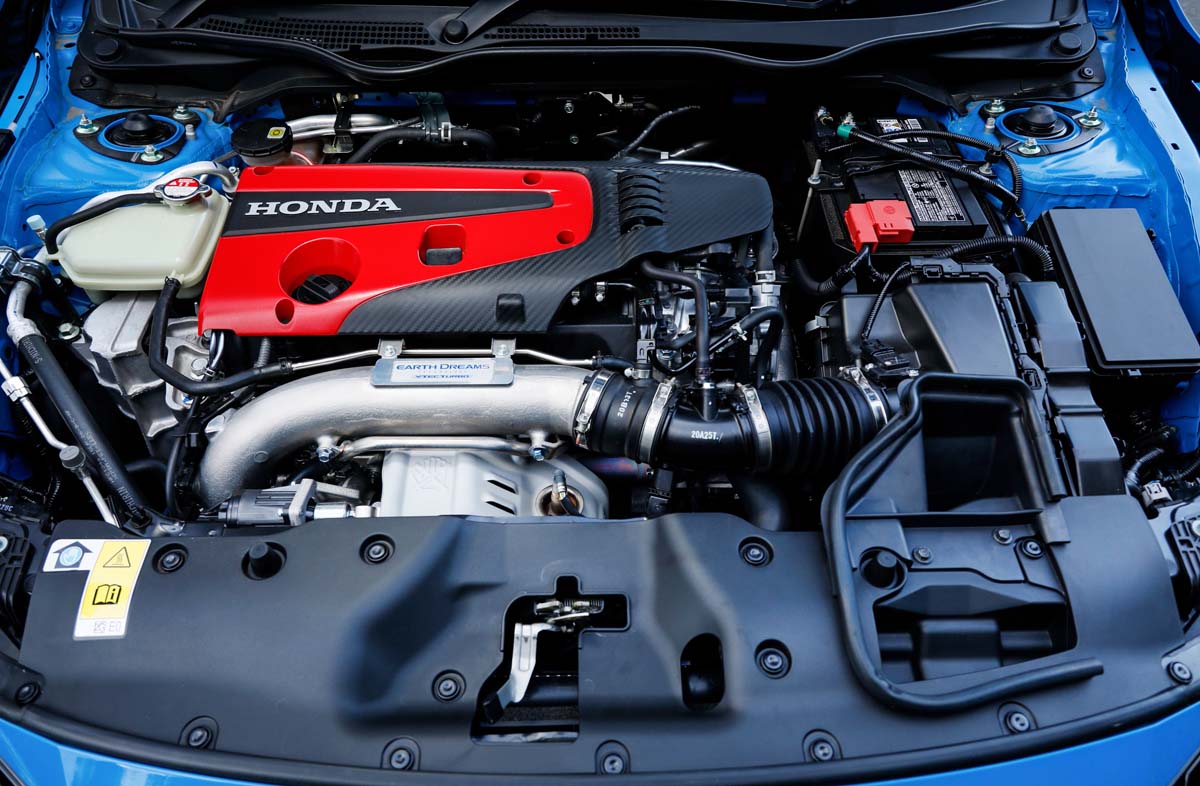 At the front end, 10 per cent stiffer compliance bushings and new, low-friction ball joints have been fitted, providing sharper steering feel, while bushings in the rear suspension’s lower B-arms have been stiffened by 8 per cent for better toe-in characteristics when cornering. 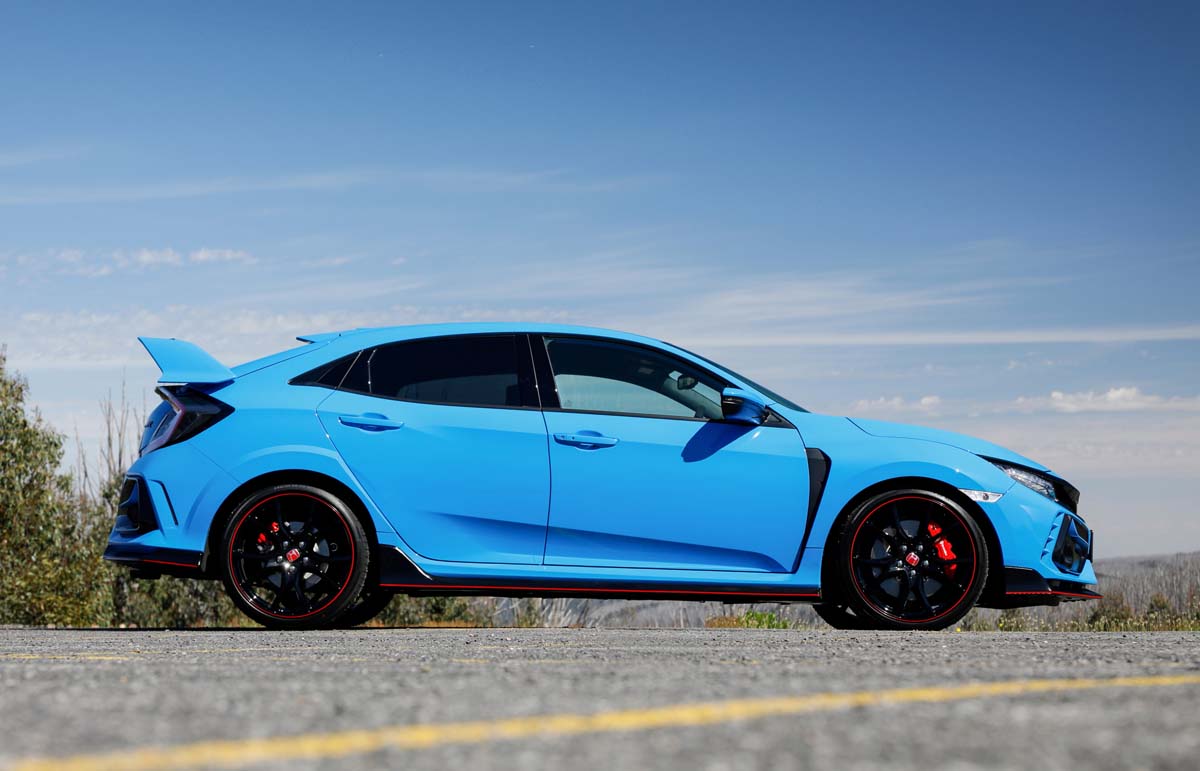 Moving on to the braking, both discs and pads are upgraded. The previous cross-drilled front rotors have been replaced by a new, two-piece floating rotor design, while the pads feature new material that reduces fading. As well as reducing weight by approximately 2.3kg, these changes also improve thermal efficiency for increased braking capability, especially during high intensity driving.

For more immediate braking response under heavy loads, the pedal stroke has been reduced by up to 15mm, or around 17 per cent.

The updated Civic Type R is the first Honda to receive a performance datalogger.

Labelled ‘LogR,’ the system combines the Type R’s onboard computer and sensors with a smartphone app, allowing owners to record and monitor a variety of vehicle parameters.

Honda claims that their LogR can deliver more vehicle information than some aftermarket dataloggers, including brake pressure, steering angle and pedal position data, while a “driving smoothness” algorithm can improve driving skills away from the track.

The three main functions of LogR are the ‘Performance Monitor,’ ‘Log Mode’ and ‘Auto Score Mode’.

As well as showing the current drive mode – Comfort, Sport or +R – the Performance Monitor uses the centre console touchscreen to display a variety of vehicle functions in real time, from gear position, coolant and oil temperatures to oil and atmospheric pressures, and even engine intake air temperatures.

Additional functions include a ‘G-Meter’ view that shows acceleration, braking and cornering on a ‘bowl’ graph, while a 3D view provides a bird’s-eye graphic of the car’s behaviour under cornering, braking and acceleration.

Log Mode is designed for track days, allowing drivers to improve lap times through data collection across a variety of parameters. Combining GPS data with the Civic Type R’s internal sensors, Log Mode gathers information on elements like acceleration, braking and cornering G force, then presents that data in the form of a colour-coded trace of the lap, showing where gear-shifting, acceleration or braking inputs can be improved. 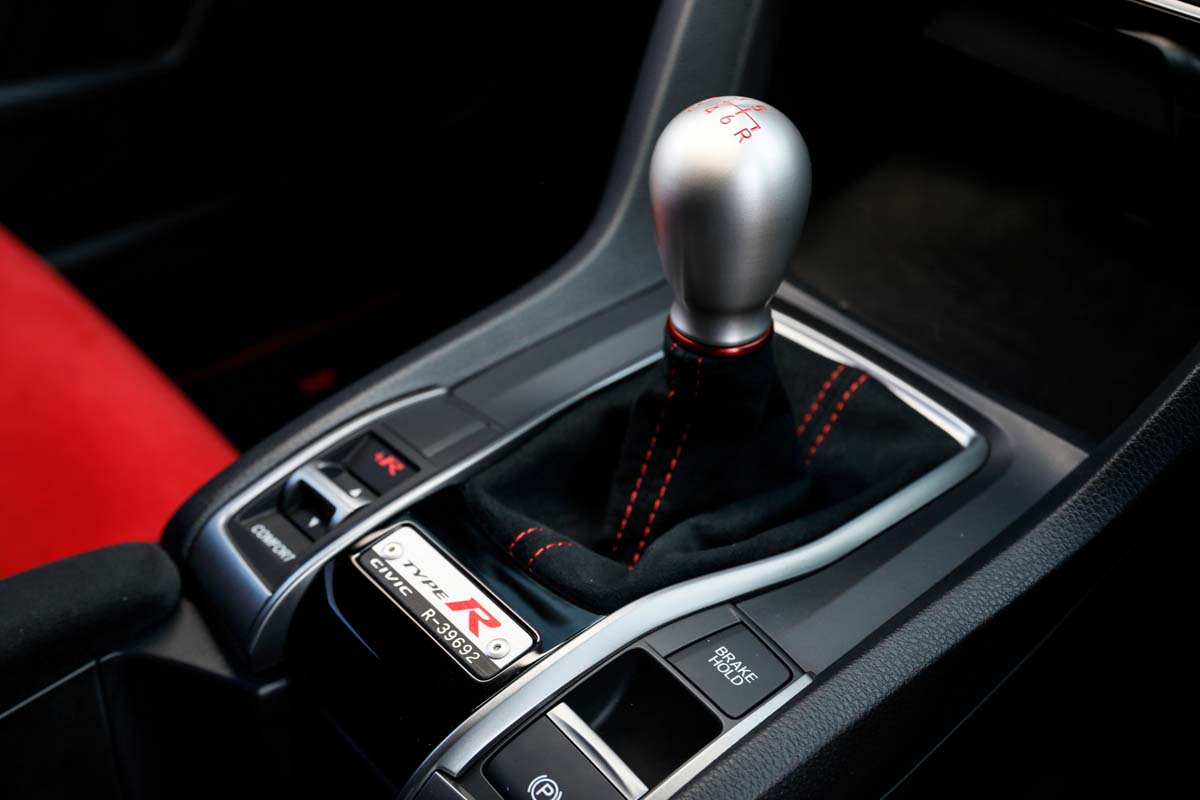 Honda says the aim of Log Mode is to encourage smooth, controlled driving, so overall track skills are improved, not just those for a particular circuit.

Auto Score is essentially a roadgoing version of Log Mode, monitoring acceleration, braking, turning and straight-line driving, but using the accumulated data to show where elements of routine driving can be altered, to improve fuel economy for example, or reduce engine and driveline strain. 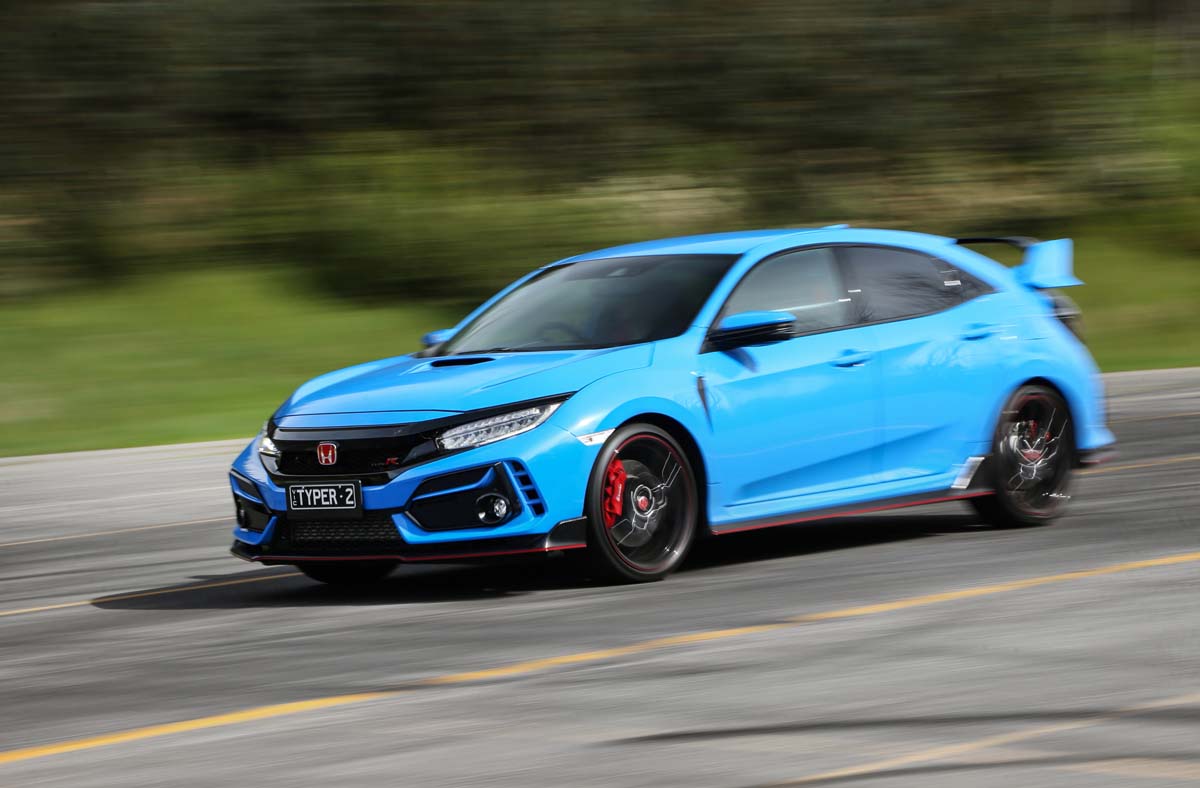 Using a “score” logged against each of the four main parameters, drivers can see what elements of their driving can be bettered, while a combined score shows how the overall daily drive can be improved, using the same expert driver baseline that’s used in Log Mode.

When activated via the required app, both the Log Mode and Score Mode functions in LogR retain data from each drive, tying in with the GPS function to show driving improvements over time. 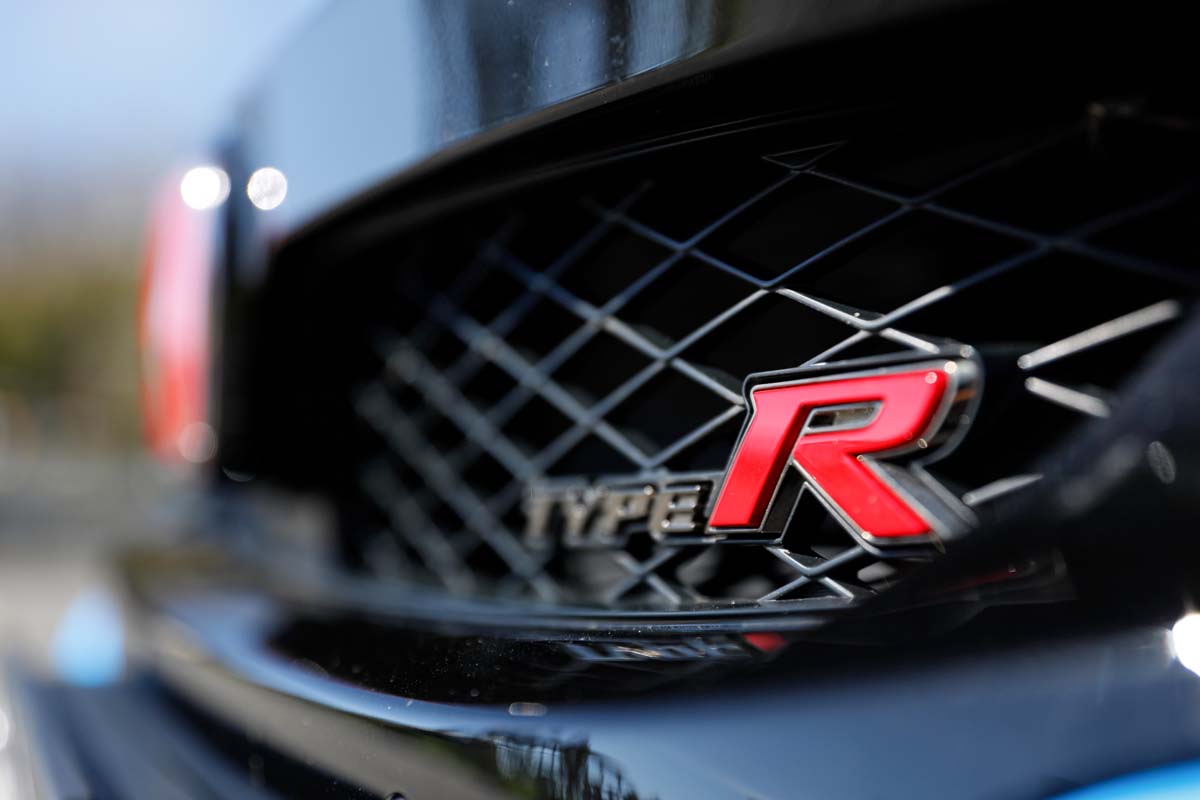 Wall Racing, the Honda-backed team in the TCR Australia Series, have confirmed their 2019 driver lineup of John Martin and Tony D’Alberto have been retained for 2021, with the latter to run a new livery inspired by the Racing Blue of the updated Civic Type R road car.

What was originally intended to be a one-round ‘livery takeover’ to launch the road car will now be retained on D’Alberto’s TCR racer throughout the 2021 season. 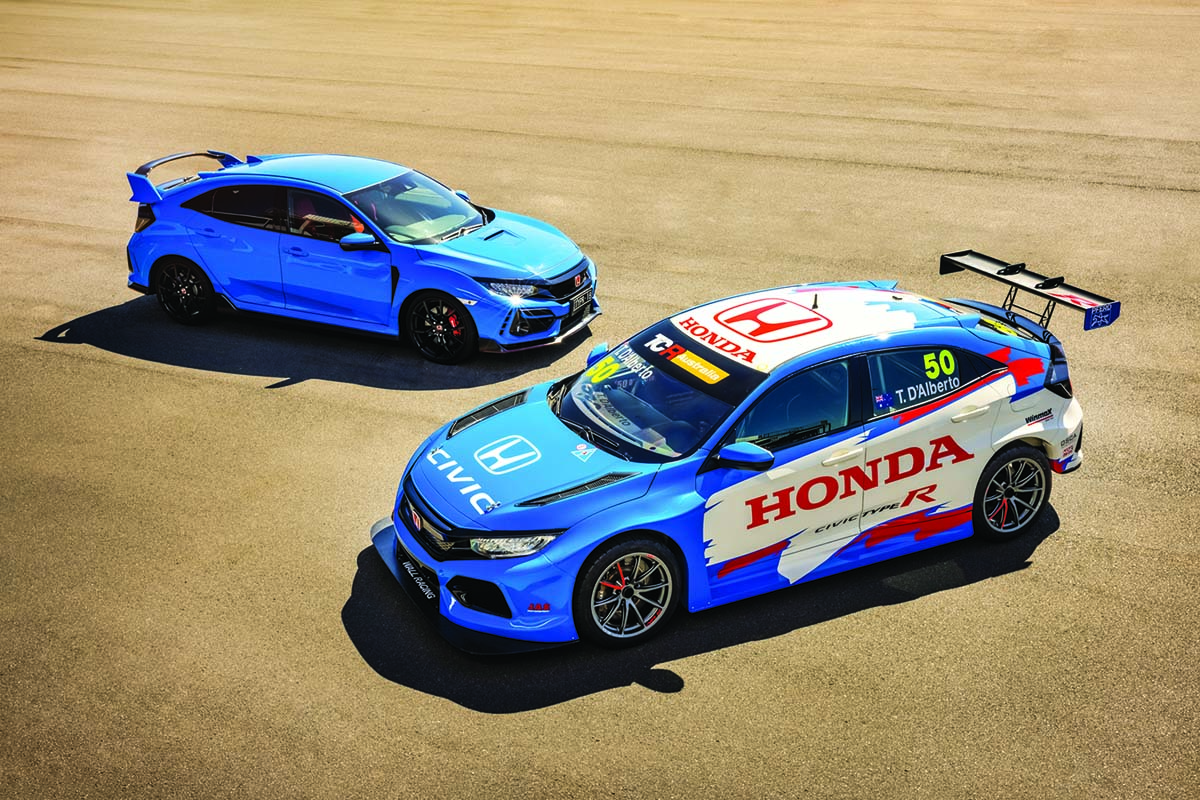 “The TCR class is a true road-to-race touring car category, so highlighting the new Racing Blue colour of the road-going version is a great way for us to show how closely linked the racecar is to the road car. Plus, it looks fantastic!” D’Alberto enthused.

The Civic Type R-based racer to be used by Wall Racing and other TCR Australia teams this season is built by J.A.S. Motorsport in Italy and virtually identical to what teams in the European and World TCR Championships race with.

In the debut season for TCR Australia in 2019, Wall Racing enjoyed some success, with D’Alberto finishing second overall, despite not winning a race. Martin finished eighth overall and guest driver Néstor Girolami won all three races at the Sandown round.

Due to the coronavirus pandemic, there was no championship in 2020, but D’Alberto and Wall Racing are ready to race this year.

“After a year on the sidelines, we just can’t wait to get into it,” D’Alberto added. “Our aim in 2021 is simple – we want to win the title and we are in the best place to achieve that.”

COVID-19 developments permitting, the six-round 2021 TCR Australia Series was set to kick off at Symmons Plains in January and conclude at Sandown in September.

The series calendar, team information and more details can be found at: tcraustralia.com