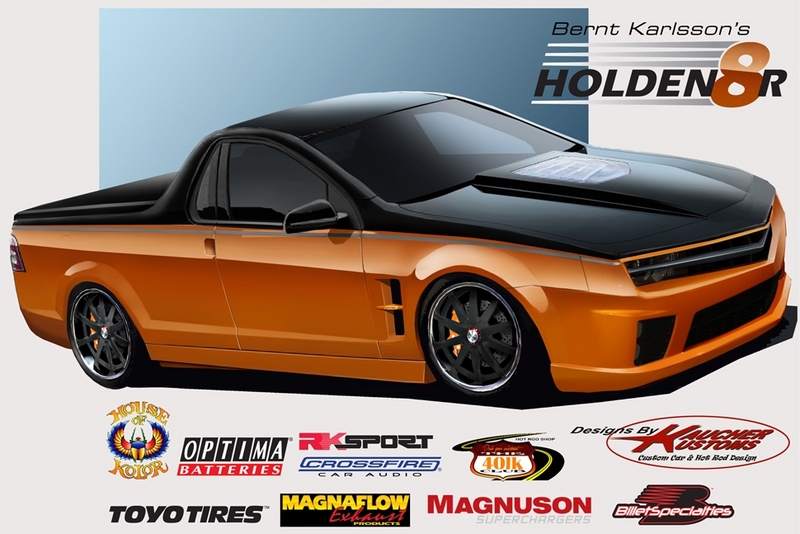 Arguably better known for his time at Boyd Coddington's Hot Rods by Boyd, Karlsson has created "Holden8r" as a follow-up to his earlier "Camaro/Camino" concept.
While a number of Aussie companies have featured at the famous SEMA auto industry show in the USA in the past, there will an extra "Aussie" touch this year in the form of a heavily-customised Holden ute, created by Bernt Karlsson from the '401k Club Hot Rod Shop' in Anaheim, California.

Arguably better known for his time at Boyd Coddington's Hot Rods by Boyd, Karlsson has created "Holden8r" as a follow-up to his earlier "Camaro/Camino" concept. 401k Club describe the upcoming creation from the powerhouse metal man as "part Australian Holden, part Pontiac G8, part 2013 Camaro and all parts AWESOME."

Bodywork modifications, which Karlsson is known for, include grafting a VE Holden ute body with a blend of Pontiac G8 (ie. Holden) parts. The front guards are a mix of Pontiac G8 near the firewall, HSV Maloo in the lower parts and the front of a 2012 Camaro. The grille insert is from a 2013 Camaro with a custom made carbon fibre accent bar covering the headlight from end to end in an elongated V shape.

The front spoiler and valance, rocker panels, and tonneau cover lip are also custom fabricated from carbon fibre. The roll pan is fabricated around a set of custom exhaust tips. The skin is then coated in a special mix two-tone of Valspar's House of Kolor pigments

The RK Sport ZR1 Hood's Plexiglass center allows a peak of the Pontiac G8 GT 6.0L V8 with a polished Magnuson Supercharger rating at 500hp and spitting out through a cat-back Magnaflow exhaust system. All that power is stopped by a set of Australian Harrop brakes covered with Schott Wheels and Toyo Tires.

The Holden8r will be officially unveiled at this year's SEMA Show, at the Las Vegas Convention Center from October 29-November 2, 2012.