A big field, big wins and the retirement of one of the Historic Touring Car community’s biggest personalities defined the 2021 Phillip Island Classic.

Looking for diversity? The Just Cars racers are on message. For the 32nd Phillip Island Classic Festival of Motorsport, 42 cars streamed on to the circuit, covering 23 individual models, 11 separate nameplates, ages from 1953 to 1972, capacities from 1000cc to 5800cc and all separated by 30 secs per lap in pace. Clear of Covid and bad weather, it was set to be a great weekend…

The name Tilley is well known in racing circles, through father John and sons Brad, Cameron and Jason. On his first visit to Phillip Island and fresh from racing a TCM Mustang at Bathurst the previous weekend, Brad’s son Jamie displayed all the family skill and speed to put his Group Nb (pre `65) Ford Mustang on pole with a new Nb record that he would lower further in Race 3. 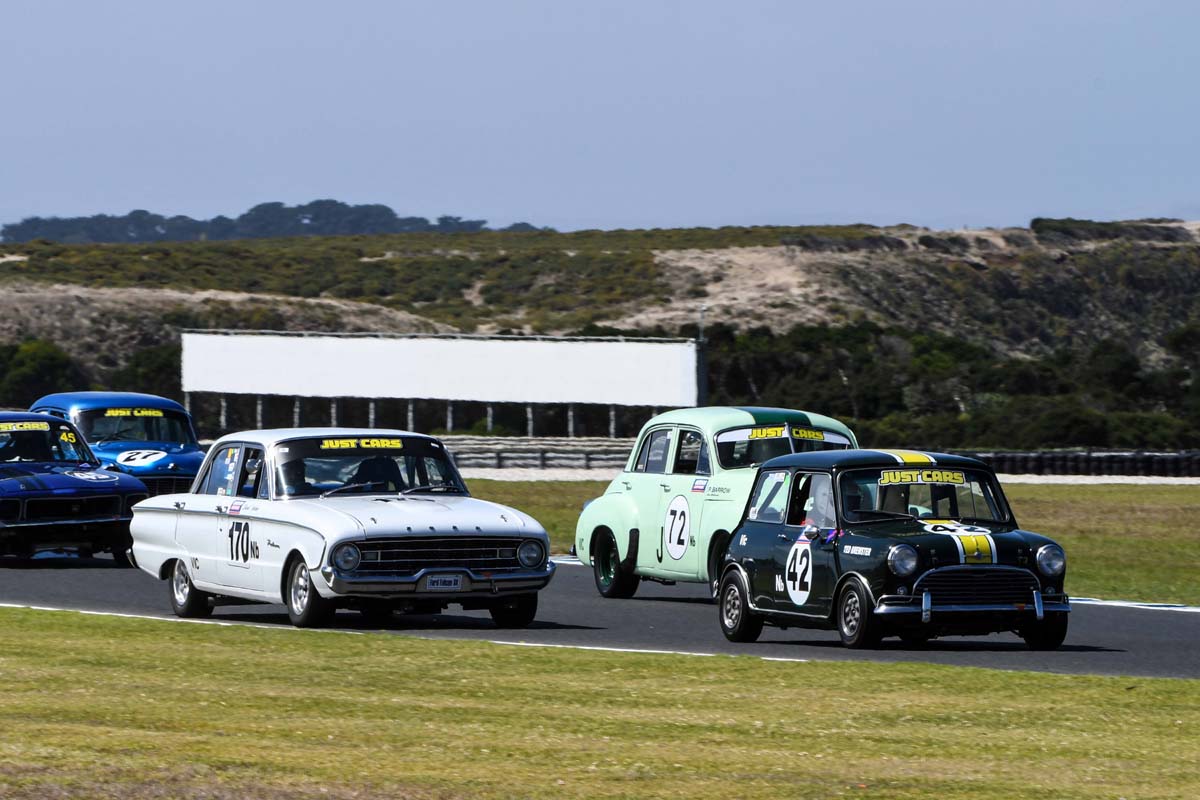 Setting the tone for the weekend, the Mazda RX-2s of NSW’s Jason Humble and Victoria’s Peter McNiven filled slots two and three on the grid. Mustang Fastbacks of Joe Calleja, Michael Miceli and Andrew Lane were next, ahead of Rob Burns’s Charger and Jervis Ward’s Group Nb Falcon Sprint. Good mates Darcy Russell in his Mustang Fastback and John Mann in his Camaro rounded out the top ten.

Tilley led the big field down into turn one for the first time and looked comfortable out in front until the Ford peeled off into pit lane after a radiator mount broke. Humble and his indecently quick Mazda RX-2 assumed the lead but it wouldn’t last long as the Boss 302-powered Mustang of Miceli stormed past on the front straight.

Behind these two, an almighty battle for third erupted between the Burns Charger and the 351 Windsor-powered Fastback Mustangs of Calleja and recent Sandown State Race heats winner Andrew Lane. Burns was treating the Valiant to its first meeting in nine years, having run a very quick Alfa 105 Series in the meantime.

Mann and McNiven had an entertaining Chev vs Mazda scrap, as did the Capris of lanky Sydneysider Alex Bland and historic open wheeler racer David Crabtree, who has joined the tin top ranks in the ex-Lawrie Nelson machine.

Ted’s son Mark retired his Torana (as did veteran Scotty Taylor) from the weekend’s opener with distributor issues.

Humble pedalled hard but could not catch the flying Mustang of Miceli, while Burns was an excellent third in the Charger. Calleja was fourth in front of Lane, who held out the Boss Mustang of Russell, followed by McNiven and Mann.

Tilley would not line up at the back of the grid after the Mustang came in on the warm-up lap. Eager to compensate for the Boss engine’s lack of torque off the line, Miceli was rolling before the lights went out and immediately had a five second time penalty added to his race time.

Mann, having earlier announced his retirement, effective from the end of this meeting, also found the Camaro creeping forward on the grid. Knocked out of gear, it could not be persuaded to go back in when the lights went out. Plumb last and a long way back, the 79-year-old eventually got the Chevy in gear and charged back through the field; a little too adventurously for the Stewards who raised an eyebrow regarding passing under yellow flags. Contrite and clutchless, Mann would not start the final, thus ending his amazing stellar motor racing career watching from the sidelines. Car, spares, massive trailer and F-truck would all be sold before the week’s end…

By the end of Race 2, it was pretty much a non-event anyway, with an early Safety Car called after Crabtree lobbed his Capri into the sand trap on the outside of Southern Loop following big pressure from Ward’s glorious sounding Falcon Sprint.

A mix up at Turn 1 during the Capri’s recovery saw the field concertina suddenly, leaving Scott Ball (Datsun 1000) to cannon into the rear of newcomer Michael George (Lotus Cortina). The race ended behind the Safety Car with Humble awarded the win ahead of Burns and Russell.

Humble made a great start to lead while Burns was out early with an engine malady in the 265 Hemi Charger. Miceli was more circumspect at the start this time around, but didn’t waste any time getting the ‘Pony’ into stride and soon blasted past Humble to move into the lead.

Humble soon had his hands full with Calleja, Lane and McNiven climbing all over him until the Mazda delaminated a front tyre, putting the Sydneysider out.

Meanwhile, Tilley had stormed up to eleventh from the back of the grid by the end of the first lap. Barrow retired after a rear brake line failed in the FJ, with Russell another mechanical casualty. Richard Hill had a dingdong battle with fellow Mini fast man Daniel Berry as ex-Hillman Imp racer David Roberts had to push his own Mini hard to keep out the wily Ted Brewster.

Nathan Gordon (Torana) had a great dice with Ward as Bland, after a wire fell off the back of the Capri’s alternator in Race 2,  was flying through the field, hurling the V6-powered Pommy Ford into an incredible eighth place towards the end.

At the front, Miceli was untroubled to win, with McNiven taking a well-deserved second place in front of the menacing all-black Mustang of Lane. Calleja showed his continued improvement in the Mustang with a fine fourth after holding out the charging Tilley. Ward just beat home Gordon, followed by Bland, Crabtree and Darren Jones (Mustang).

Lane’s Gain and More to Come

The Phillip Island Classic was a welcome return to big meeting motorsport for the Just Cars drivers, and while crowd numbers were restricted, there was a great optimistic buzz in the air.

The Makulu Vehicle Storage Driver of the Meeting Award went to Andrew Lane.

After Phillip Island, some drivers would next contest the support events for the Hi-Tec Oils Bathurst 6-Hour over Easter, but history will be made at The Bend in South Australia on 8-9 May with the first ever interstate Just Cars HTCAV event. South Australian readers – make sure you’re there to support it! 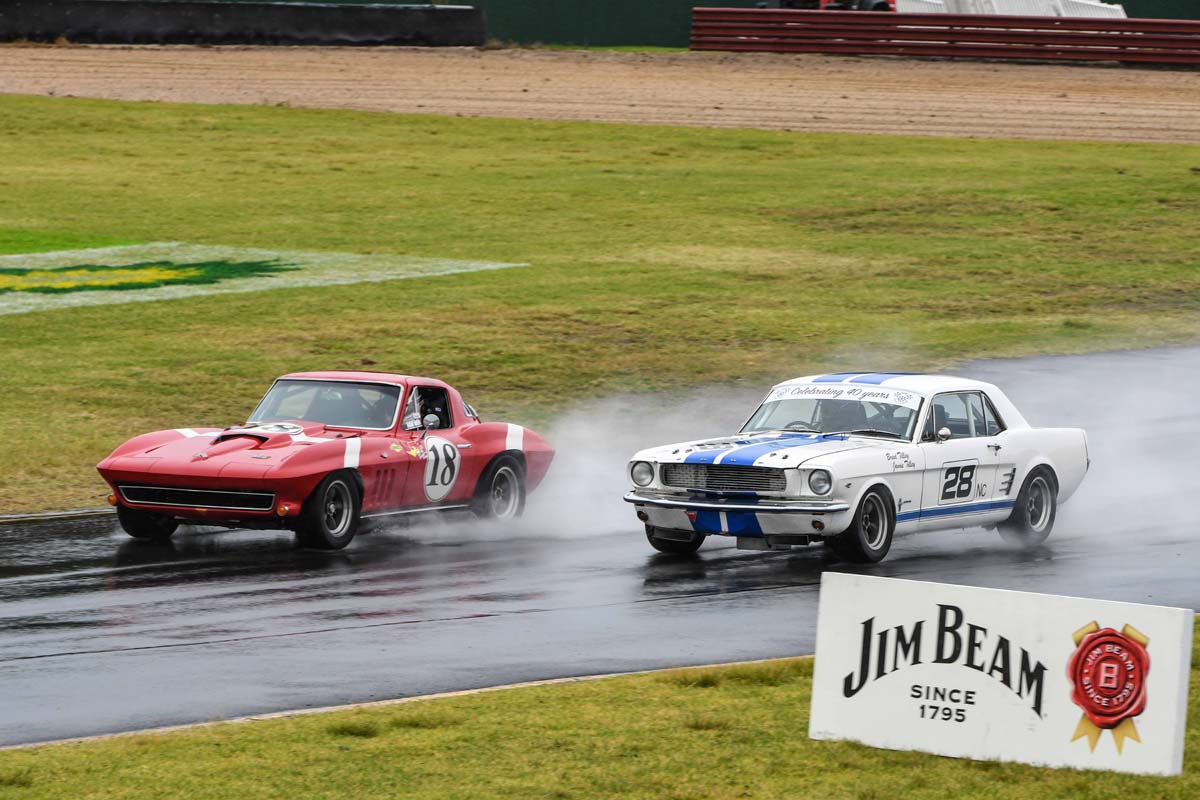 ‘Heritage Revival’, a curated group of historic production-based cars from Groups A, C and N Touring Cars and Group S Sports Cars, put on a great show to support the Repco Supercars at Sandown on 20-21 March.

The brainchild of Group C’s Ed Singleton, the event was a “demonstration” of historic competition, with entry selection based on comparable lap times between 1min 22 and 1 min.28 secs to create a closely matched field. ‘Demonstration’ took a back seat to ‘racing’ from an even field that included a De Tomaso Pantera, Chev Corvettes, Porsches, Jaguar XJSs, Ford Sierra, Mustang, Falcon and Capri, Holden Commodores, Toranas A9X, L34 and XU-1, plus a familiar black BMW 635. Four races of an average ten laps showed that Group N cars were the fastest contingent with four of the top ten qualifying spots to their credit.

NSW father and son Brad and Jamie Tilley were the quickest historic tourers in their Mustangs, with Brad winning two races and placing second in two. John Bowe in Joe Calleja’s Corvette won the other two, while Joe himself put in a strong performance in his Mustang.

A good showcase for the Historic Touring contingent, Heritage Revival is slated to return later in the year, supporting the Bathurst 1000.