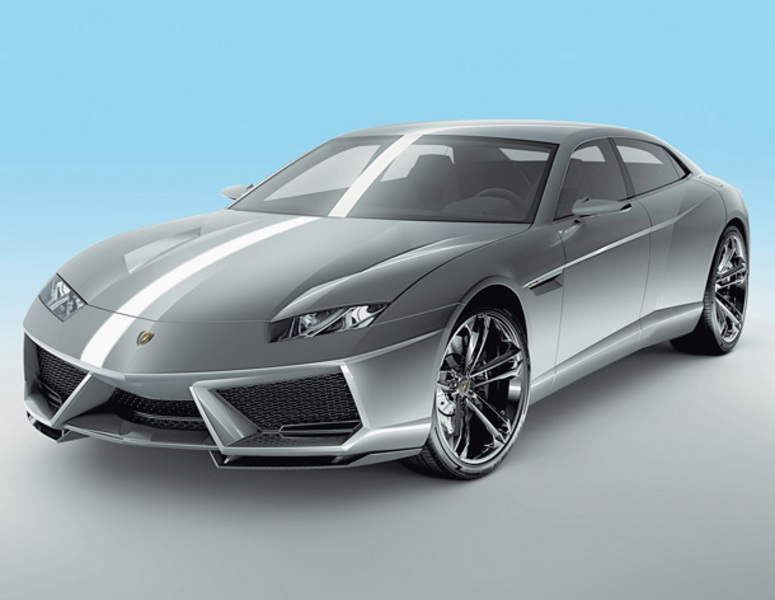 Lamborghini say the Estoque concept, which was officially unveiled at the Paris Motor Show, has everything that defines their brand: extreme, uncompromising and unmistakably Italian. With its four seats and ample luggage space, this "everyday sports car" harks back to the Espada, the last true Lambo four-seater that was produced for a decade from 1968. The front end treatment inspired by the Reventon limited edition model, is the most obvious Lambo styling cue, but there's Sant'Agata DNA in the long wheelbase, low profile, broad track, clean surfaces and razor-sharp definition. The first sedan in the history of Automobili Lamborghini, although "sedan" is more a reference to the Estoque's number of doors than any other characteristics. With a powerful front mid-engine (the press release states that the engine sits behind the front axle line), permanent all-wheel drive and a sophisticated, precision-tuned chassis, the Estoque boasts a unique technology package. As a concept, the Lamborghini Estoque represents one of several possibilities for a third model series within the Lamborghini product line-up.

At this point in time, no decisions have been taken in respect of either a third model series of any kind, or of the Estoque concept in particular. All the PR bulldust aside, the Estoque is a taster of what Sant'Agata could be producing in the future. There's little doubt its creation has been inspired by Porsche's upcoming four-door Panamera and Aston Martin's Rapide sedan, both of which are due to go on sale late in 2009. Lamborghini will no doubt be watching the launch of the Panamera with interest - if the new Porsche sedan is a runaway success, expect the Estoque to get the green light for production soon after! Despite its extremely low profile - a mere 1.35 meters high - the Estoque is surprisingly spacious. The secret lies in its very long wheelbase which, in spite of the rearwards positioning of the front mid-engine, enables a relaxed, sporty seating position. Entering and exiting is made easier by the large, wide-opening doors. At the same time the Estoque is a thoroughbred sports car with exceptionally refined power delivery, razor sharp precision handling and a meaty engine tone. The permanent all-wheel drive that is typical for all Lamborghinis means that the 22-inch wheels, with their new five double-spoke design, also do their part in delivering power to the road.

Its proportions guarantee the Lamborghini Estoque an impressive appearance. In the profile view below, there's no doubt the Estoque looks impressive. However, other angles accentuate the bulky rear-wheel arches (necessary for rear passenger comfort), and the short, 'pinched-off' look to the front end. Despite its extremely low profile, the Lamborghini Estoque offers a surprisingly generous feeling of space. Driver & passengers sit in four individual sports seats. The interior reflects elements of the exterior design, for example, the swooping V-shape applied to the cockpit reflects the form used on the front end and bonnet. The cockpit features a large LCD screen with vehicle and route information, a top class audio system and sophisticated rear seat entertainment system round off the equipment. Lamborghini exceeded 1000 sales/year for the first time in 2003 and 2,000 for the first time in 2006. It sold 2,406 cars in 2007 - up 15 percent from 2,087 in 2006.