‘Morgan’ and ‘Off-Road’ are two words that rarely go together, but the boutique British carmaker has some history away from the tarmac, specifically in trials; that peculiar form of automotive competition that’s characterised by persuading roadgoing cars up grassy hills, through muddy tracks an across swollen creeks. It’s a form of motorsport that built a strong following in the UK a century ago and remains popular there to this day. To pay homage to their own heritage in trials (that dates back to 1911), Morgan have released a limited-edition version of their Plus Four roadster – the CX-T. 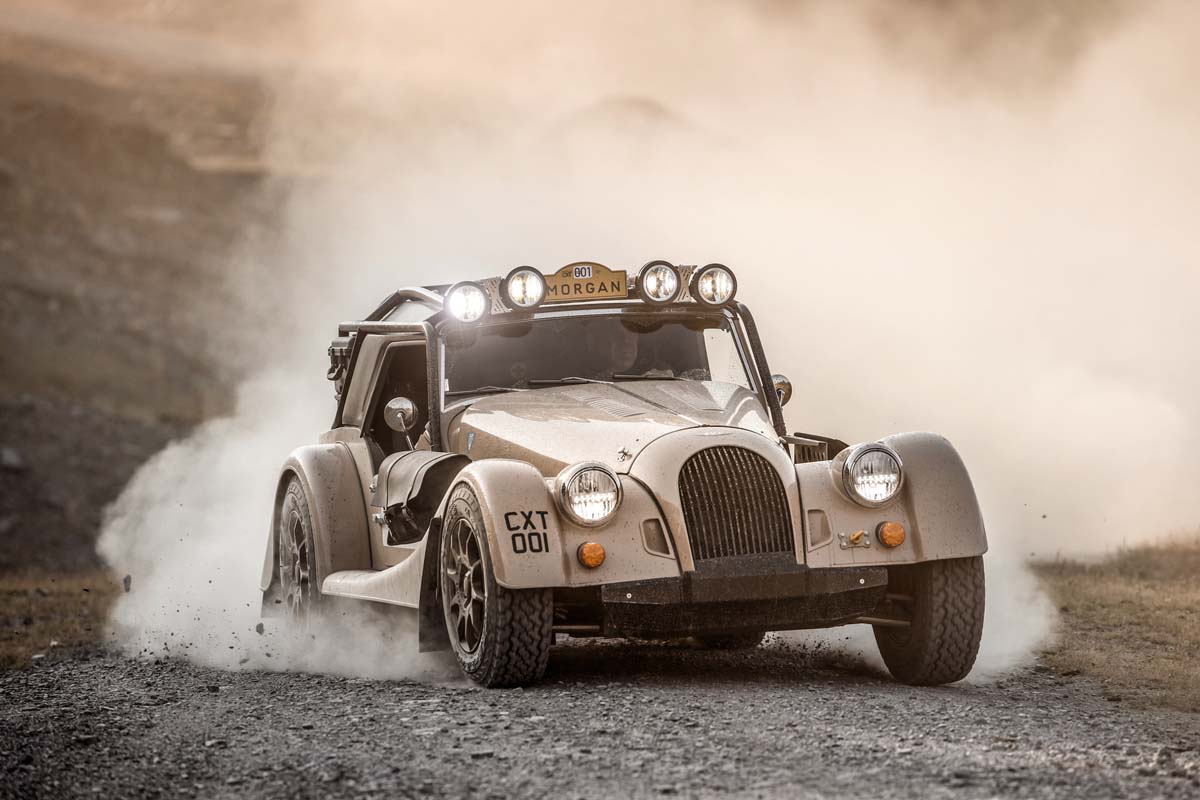 Based on Morgan’s new CX-Generation bonded aluminium platform that was introduced in 2019 and added to the Plus Four in 2020, the CX-T (‘T’ for Trials) is described as a car “with adventure at its core,” promising capability previously unseen in a Morgan sports car and opening up “the possibility of routes, landscapes and destinations inaccessible by Morgan cars until now”. 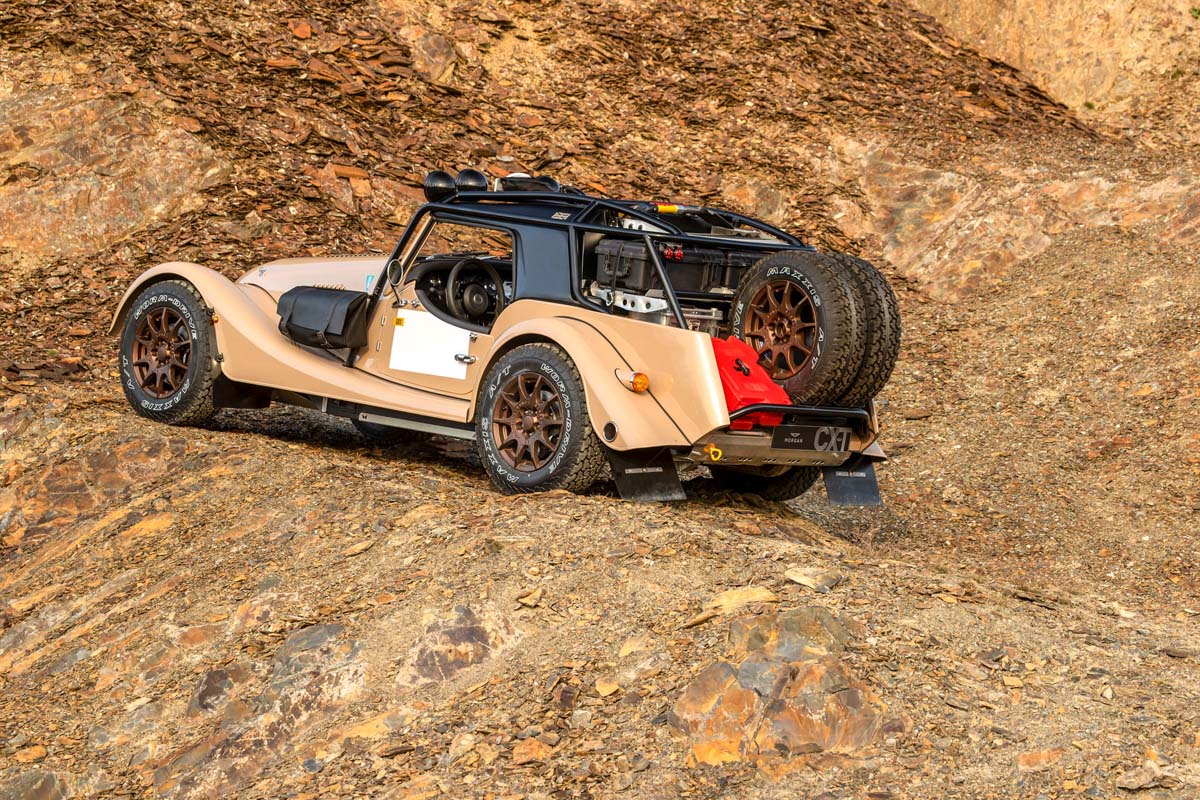 As well as paying homage to their history in trials, Morgan are also using the Plus Four CX-T to demonstrate the strength and durability of the CX-Generation platform. 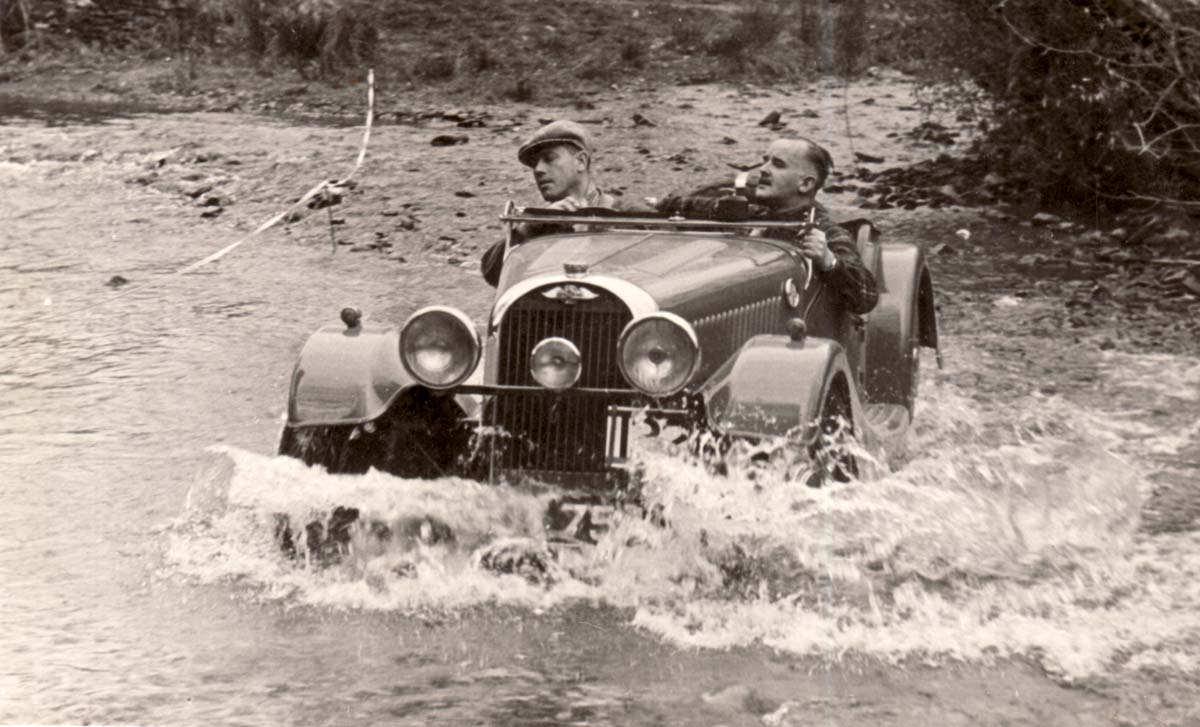 “The Morgan design team has been conceptualising modern day trialling vehicles for many years,” said Jonathan Wells, Head of Design, Morgan Motor Company, in announcing the Plus four CX-T project.

“The CX-T, like many recent Morgan vehicles, demonstrates the flexibility of the Morgan design. For me, it’s a complete package: historical integrity, legitimate capability, and a brand-new adventure-lead aesthetic.” 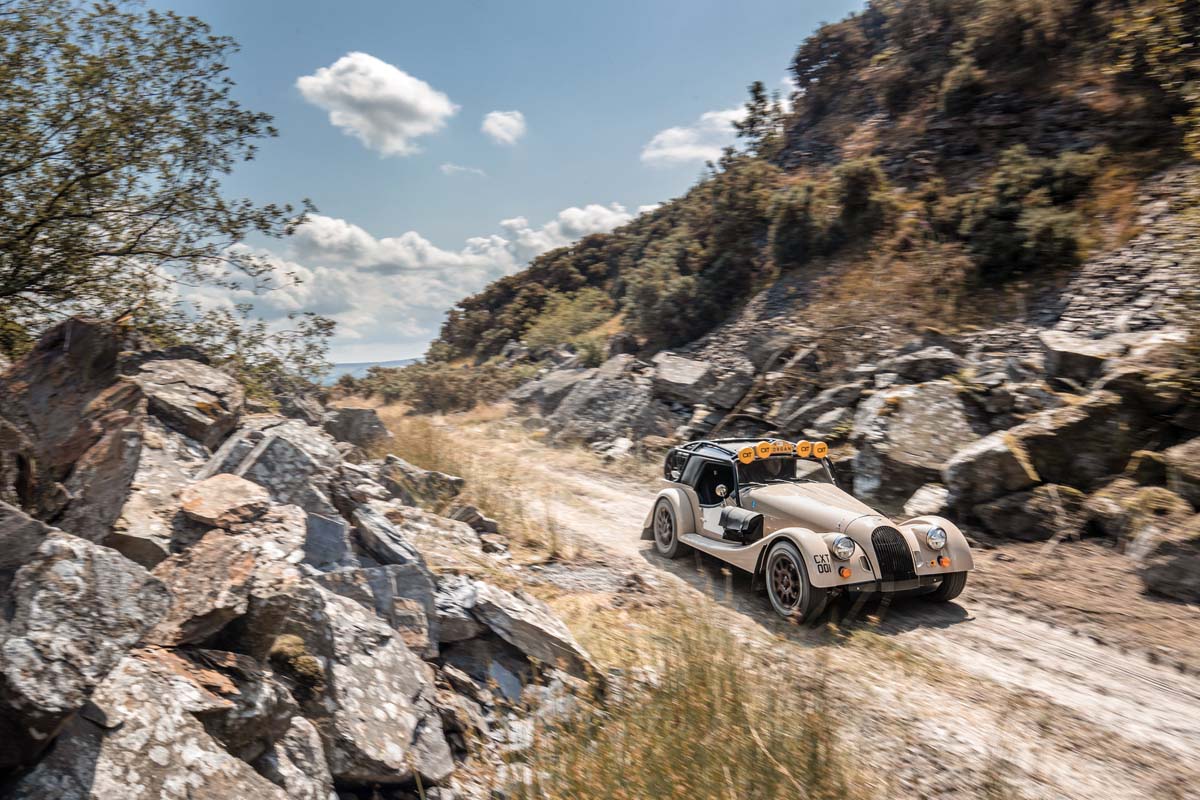 To bring the Plus Four CX-T project to fruition, Morgan called on Rally Raid UK, constructors of competition machines used in the iconic Dakar Rally, to assist with design and engineering.

Each Plus Four CX-T will be built at Morgan’s Malvern factory, then sent to Rally Raid UK in Huddersfield for final preparation and set-up.

While Rally Raid UK are experts at building and preparing vehicles for extreme off-road competition, Morgan says their own design and engineering team have been working alongside the Rally Raid UK crew to define the concept, specification, technical attributes and aesthetic of the Plus Four CX-T. 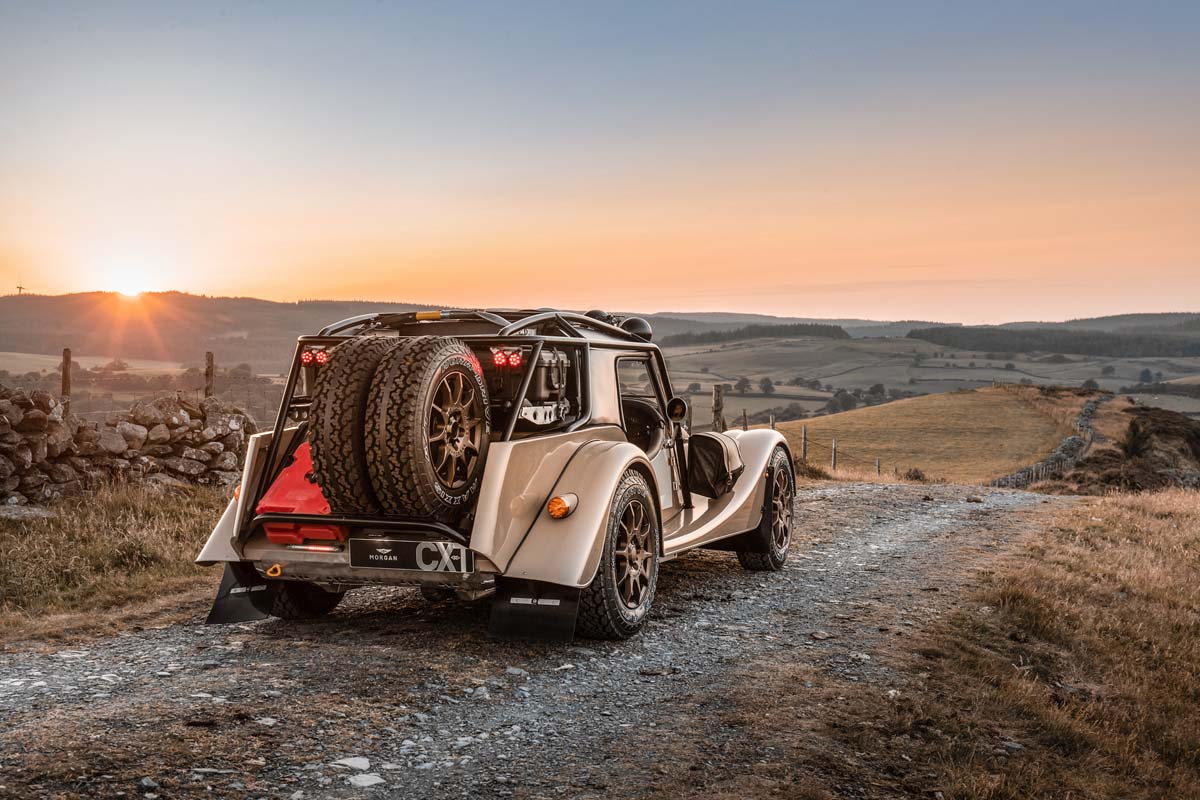 Amongst the key considerations in the development of the Plus Four CX-T was the ability to carry the equipment, fuel and spares needed for long distance off-tarmac driving.

One of the key changes made to achieve this is the deletion of the entire rear deck. In its place is a bespoke equipment rack that holds two Rotopax fuel containers, a Zarges aluminium toolbox, two waterproof Pelican luggage cases and a pair of spare wheels. 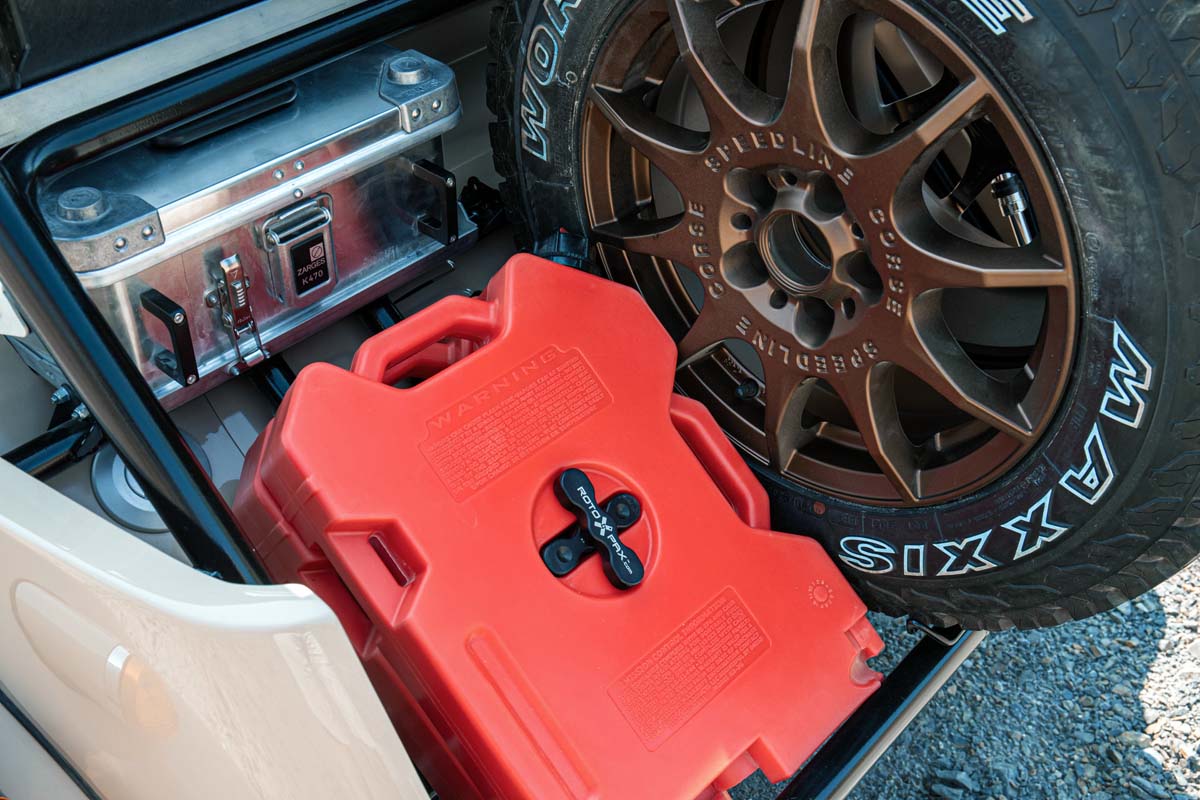 Also serving as a mounting point for recovery gear and a quartet of spotlights on top, as well as motorcycle-style panniers at the front, this rack is part of an exterior roll cage that Morgan says can be adapted to carry leisure equipment like mountain bikes or surfboards, with all the attachment points designed to be easily accessible. This external cage is also designed to carry the Plus Four’s removable side screens.

As a further point of difference form the conventional Plus Four, the CX-T features a fixed hard roof, instead of a folding convertible soft top. 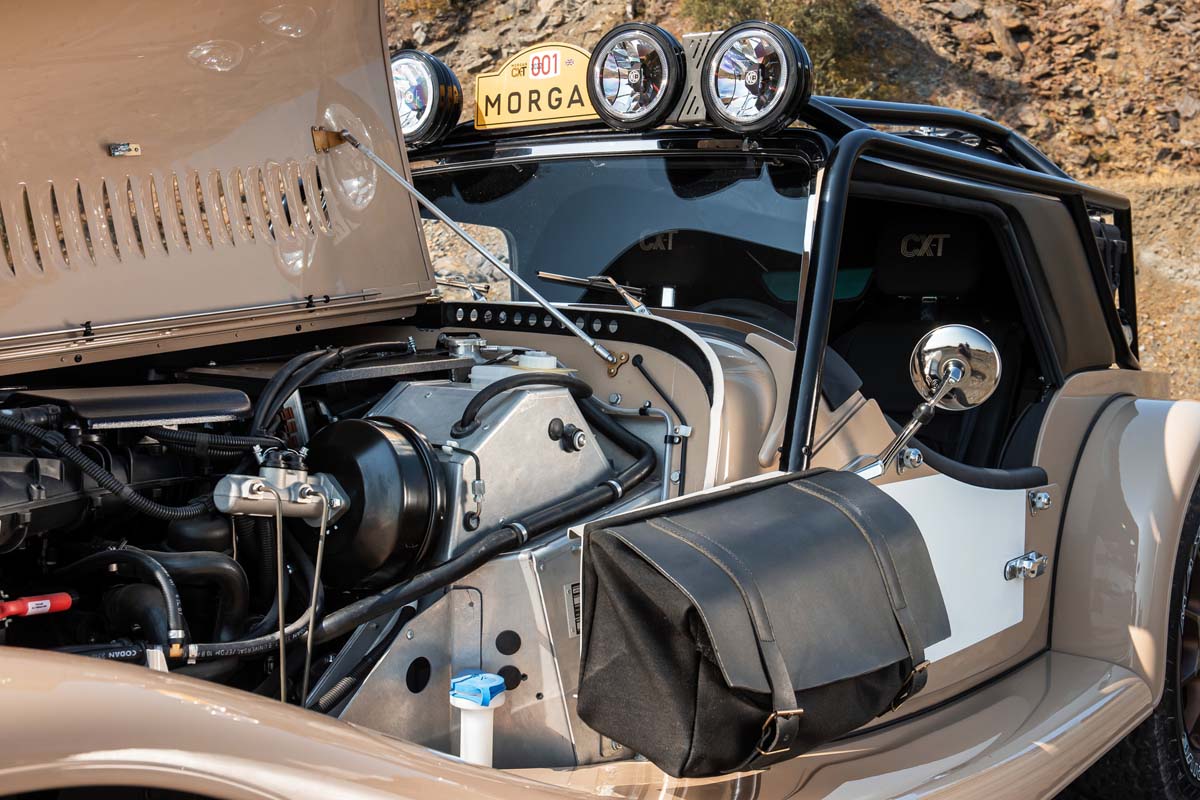 Tough from the Ground Up

To ensure the Plus Four CX-T has the durability to take on rough terrain (but not too rough – this is a sports car, after all), Rally Raid UK conducted durability assessments of the CX platform, as well as Morgan’s drivetrain and suspension components.

The outcome was to fit a mix of existing and bespoke componentry, starting with wishbones from the Plus Six. These allowed for the additional suspension travel required, with the Plus Four wheelarches modified to suit. Lower suspension arms contain bespoke bushes for increased durability. 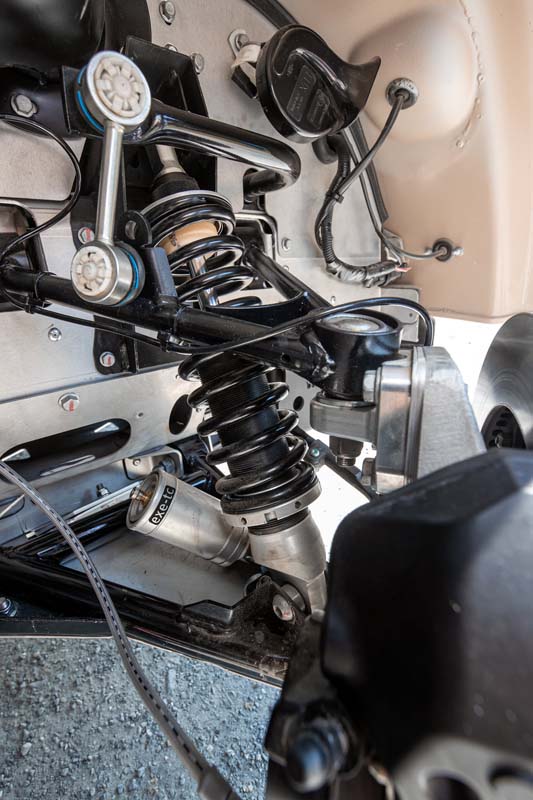 EXE-TC coilover shocks with internal bump stops are used at all four corners, developed from off-road competition applications and calibrated specifically for application to the Plus Four CX-T.

Ground clearance has been increased from 150mm to 230mm and there’s a five-piece underbody protection system, comprising a 6mm thick aluminium engine guard, plus a rear chassis guard, mid-section shield and rear undertray.

The exhaust system has been modified, too, positioned so it doesn’t compromise the ground clearance, while an exit point in the nearside rear guard won’t impact departure angle. 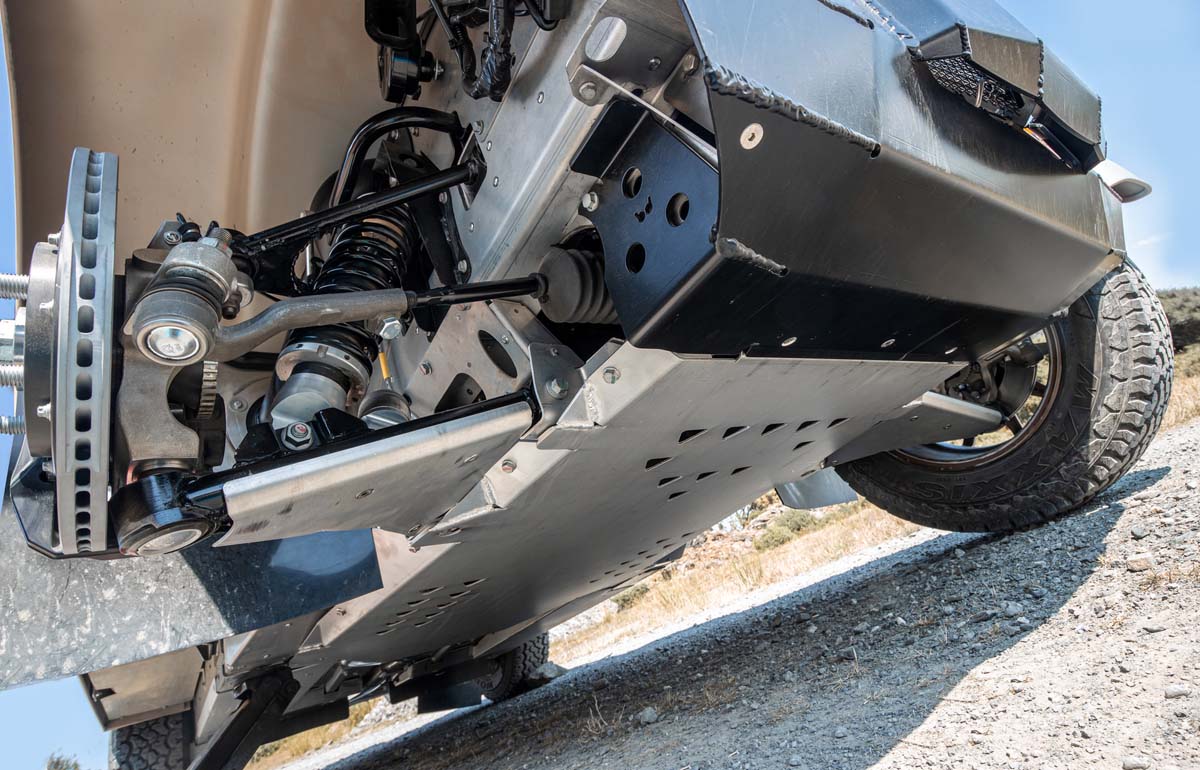 “Applying my experience of 13 Dakar Rallies, 60 Dakar vehicle builds and a lifetime of overland adventuring to an unconventional sports car such as a Morgan has been an interesting and rewarding project,” said Rally Raid UK founder, Mike Jones. 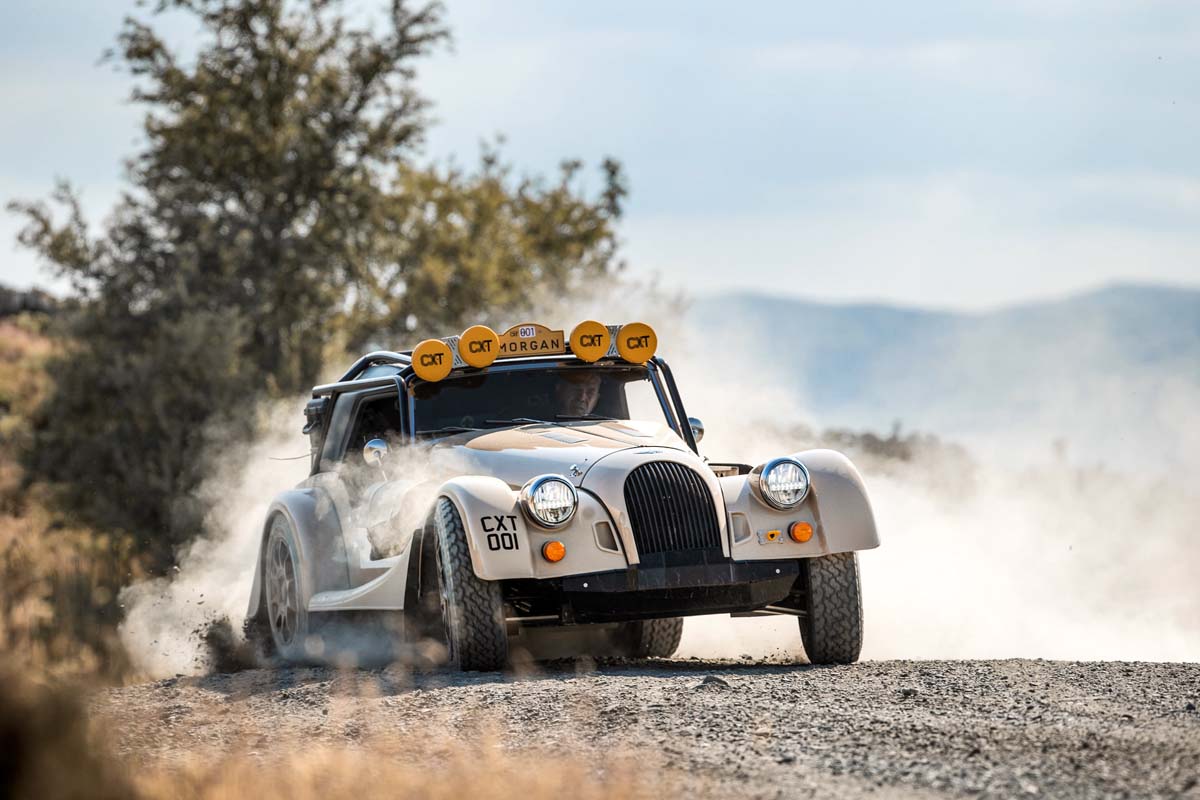 No mention is made of the Plus Four CX-T’s drivetrain, so presumably is uses the same BMW 2.0-litre TwinPower turbocharged four-cylinder engine driving the rear wheels as the regular Plus Four, as well as that model’s choice of six-speed manual or eight-speed automatic transmission. 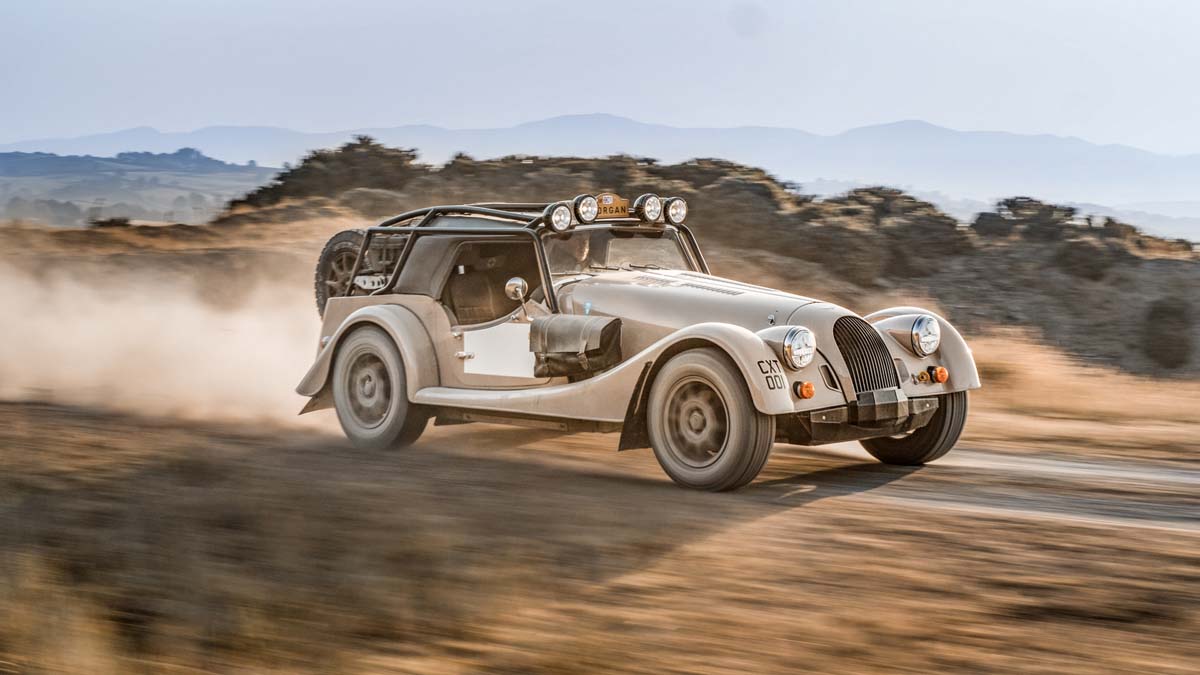 The BMW engine replaces the naturally aspirated Ford four-cylinder used during the Plus Four’s ladder-frame chassis era and offers 190kW and up to 400Nm, depending on transmission choice. It appears that the only modification made to the engine is a raised trailing edge of the bonnet to assist in extracting hot air from the engine bay. 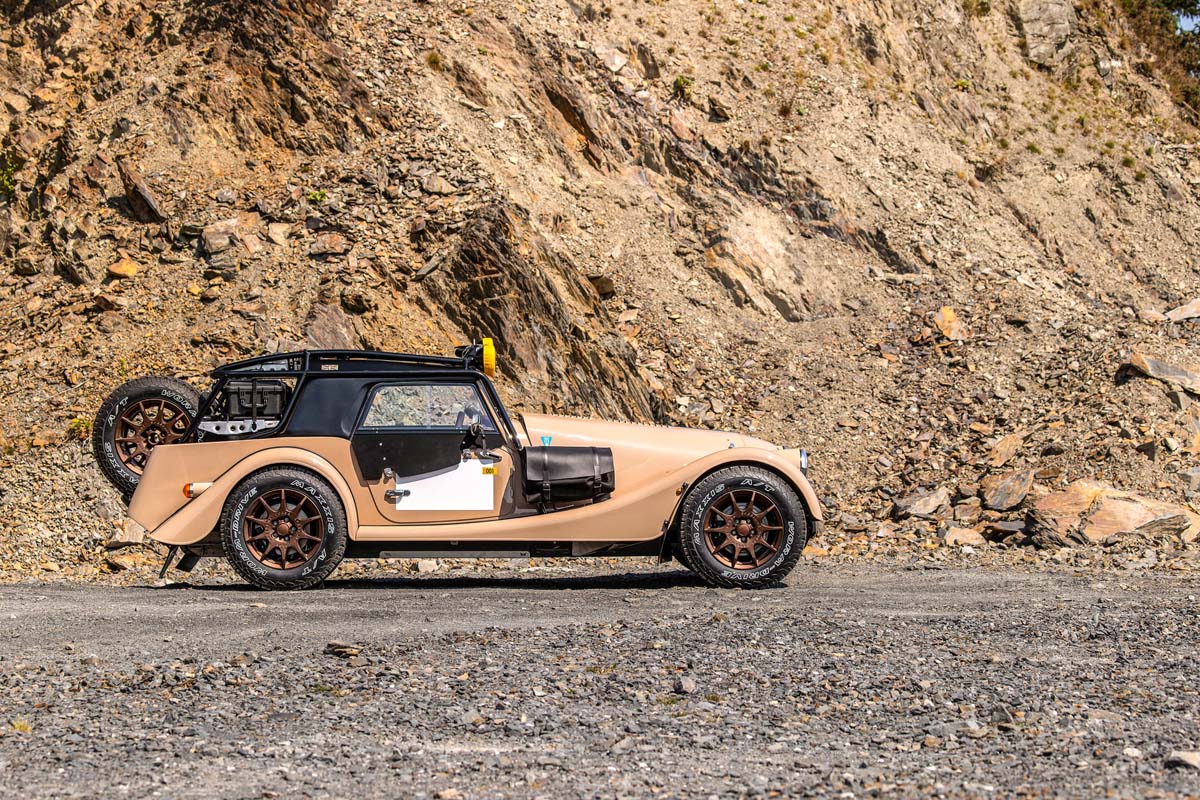 What is new for the CX-T is the adoption of the X-Drive electronic rear diff that’s applied to BMW’s all-wheel drive cars and SUVs. In this application, the diff is three-position adjustable, varying the degree of diff lock. In ’Road’ mode, the diff is fully open, while ‘All-Terran’ applies approximately 45 per cent lock. ‘All-Terrain Extreme’ completely locks the rear diff for maximum grip in low-traction conditions. 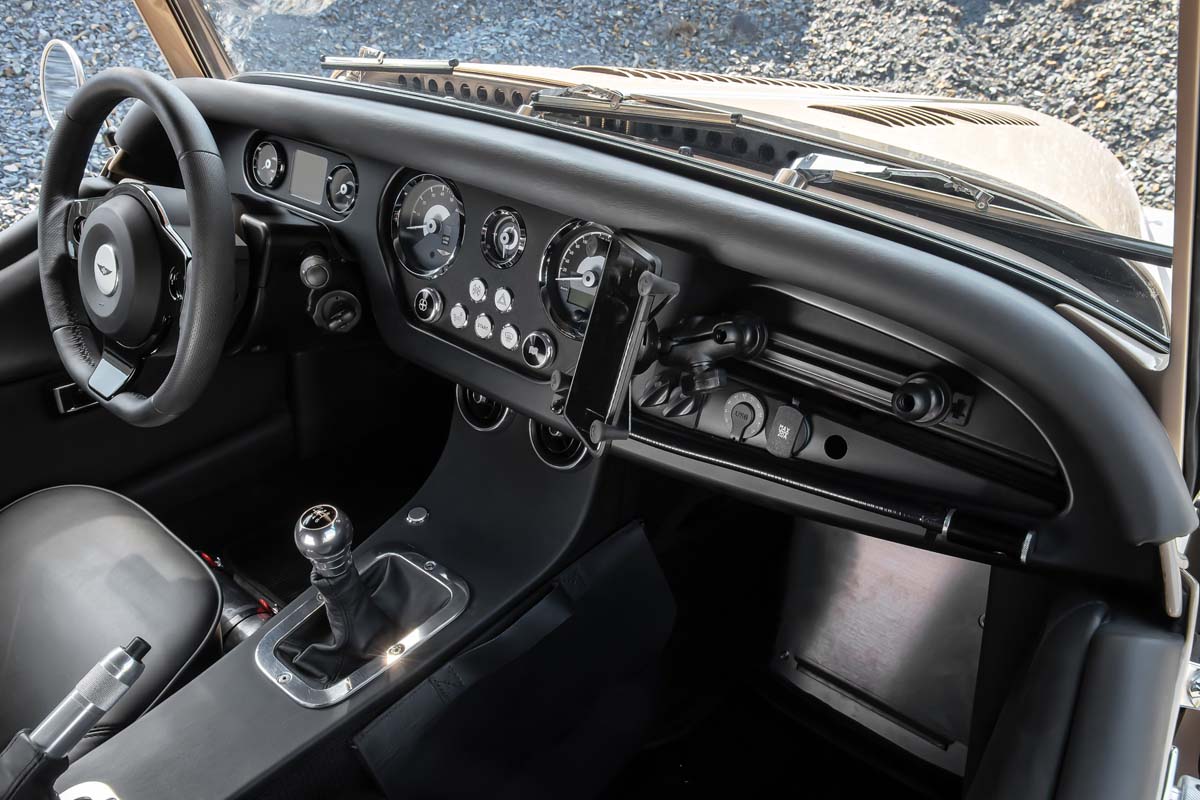 Inside the CX-T, there’s not a lot that appears different from a regular Plus Four, but some changes have been made, including the addition of a padded internal roll cage.

The steering wheel is unchanged, as is the instrumentation and most of the dash, but in place of the ‘open’ glovebox, there’s a RAM-mount system to hold smartphones, GPS devices or GoPro cameras. This space also houses USB and 12V ports, with a flexible map light added below the glovebox, as well as provision for a pencil and notepad. 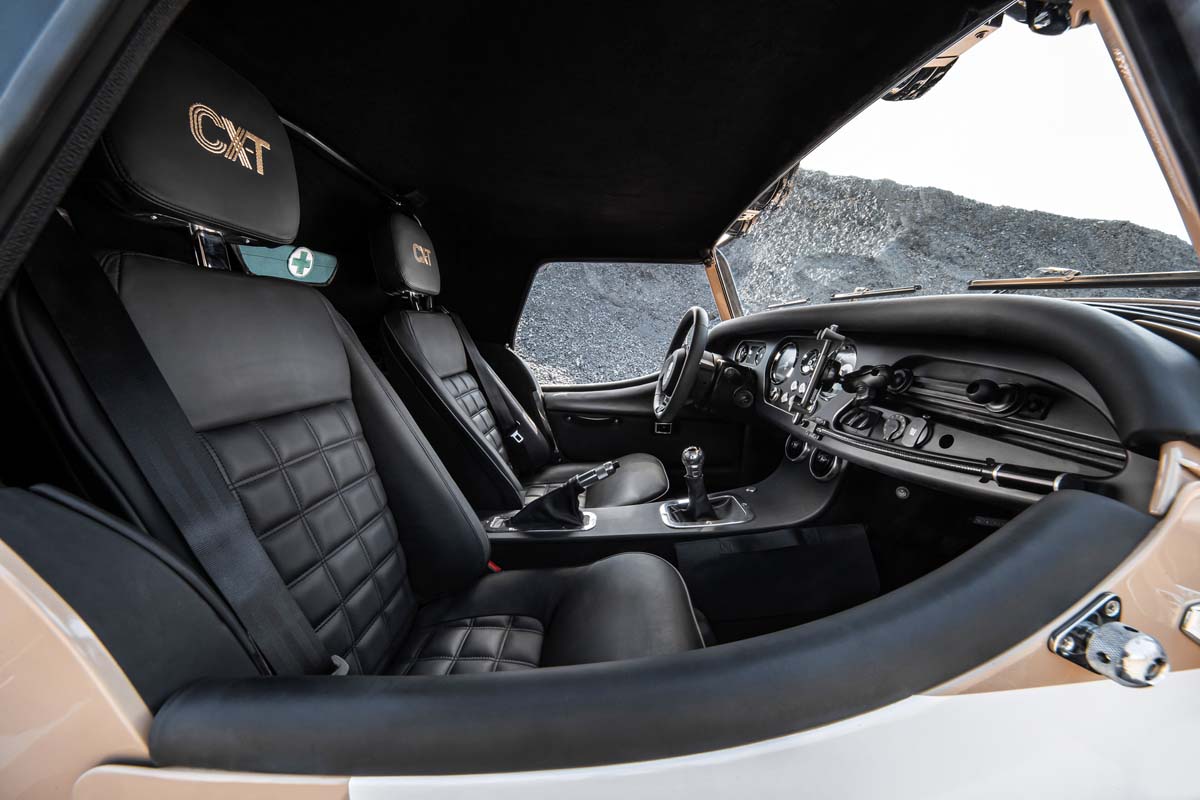 To the passenger-side footwell, a removable map holder and insulated cool bag have been added, while a first aid kit is mounted behind seats that carry ‘CX-T’ identification embroidered into the headrests. 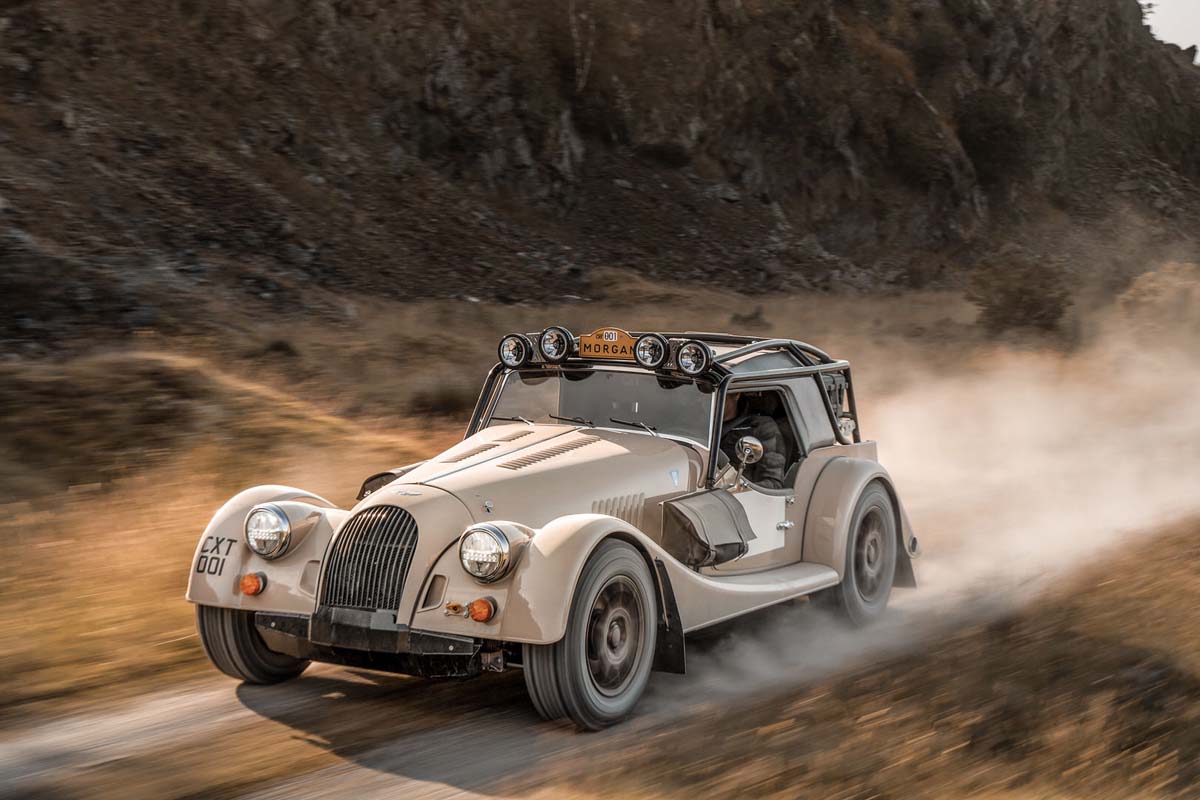 The Plus Four CX-T is the second of two special projects being produced in 2021; the first being the Plus 8 GTR. When they announced the Plus Four CX-T on 5 August, Morgan committed to building only eight units.

Each CX-T will be priced at £170,000 (AU$322,000 approx.), with all eight units to be completed before the end of 2021. Morgan says customers are invited to work alongside Morgan’s design and build teams to ensure their CX-T is personalised to their taste.

The project was unrestrained and born entirely from a desire to create an exciting British adventure vehicle,” said Morgan’s Jonathan Wells. 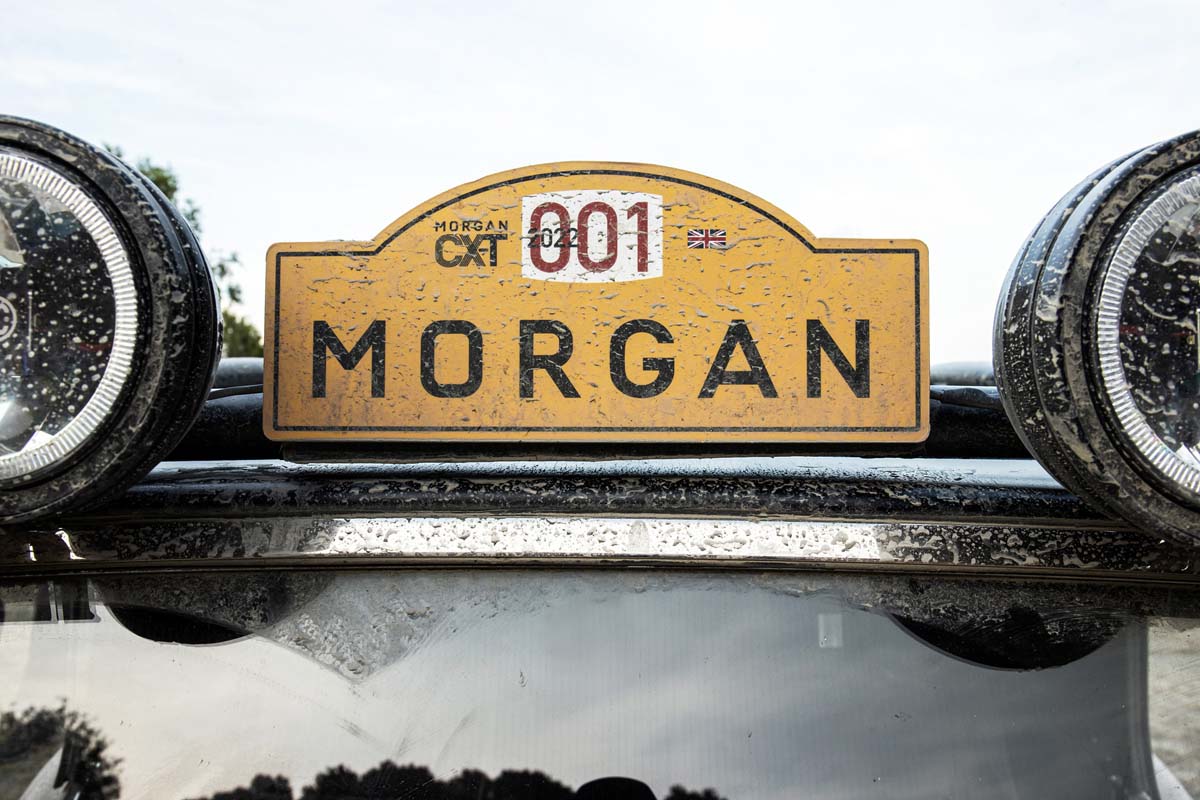 Rally Raid UK’s, Mike Jones added: “Having the opportunity to design a car for such a prestigious marque has been a responsibility that I never imagined I would have. Rally Raid UK and Morgan have engaged with industry-leading suppliers to source the highest quality components, as well as designing a range of bespoke parts that will remain unique to the model.

“The Morgan Plus Four CX-T is a genuine overland adventure vehicle and I look forward to seeing the incredible destinations that owners will find themselves in.”