The most recent Mercedes-Benz SLK is an agile roadster which promises optimum open-air driving pleasure, with a new design, high comfort levels and top technology

The most recent Mercedes-Benz SLK is an agile roadster which promises optimum open-air driving pleasure, with a new design, high comfort levels and top technology. Having just opened the book to take customer orders in Australia, the new Mercedes-Benz sports car already looks set to continue a success story which started back in 1994 with a show car. Strictly speaking, however, the pedigree of the SLK stretches back even further - to the 190 SL, a vehicle which automotive enthusiasts were already dreaming about in 1955 as the economic upturn was starting in the Federal Republic of Germany.

When the SLK appeared as a series-produced car in 1996, it not only caused a stir on the road but also established a new market segment which has since grown by leaps and bounds. With the steel vario-roof, which transforms the roadster into an all-weather coupé within a matter of seconds, the roadster has been and still is the role model for many open-top cars. The success of the SLK has exceeded all expectations and to date, well over half a million owners have laid claim to an SLK roadster.

The Mercedes-Benz SLK's direct ancestor is considered to be the 190 SL, which owes its existence primarily to the perseverance of Maximilian Edwin Hoffman. The enterprising American with Austrian roots was importing European cars into the USA as early as 1946, and in doing so demonstrated infallible instinct and tremendous flair. In 1953 he urged the executive boards of Daimler-Benz to build another affordable sports car, in addition to the 300 SL, for the American market. As an elegant sports car from a well-known company featuring an exciting design at a low price, the 190 SL was designed to charm the Americans.

After a development period of just five months, on 6 February 1954 the 190 SL celebrated its world premiere in New York, alongside the legendary 300 SL "gullwing".

Unlike the 300 SL, the 190 SL was not designed as a purebred sports car but rather as a sporty, elegant two-seater touring and utility vehicle. Its chassis was the shortened frame floor assembly from the Mercedes-Benz 180 (W 120), combined with the single-joint swing axle with lowered centre of rotation, as used in the 220 (W 180). The front-wheel suspension, including subframe design, came from the 180 model. The 190 SL was driven by a newly developed four-cylinder engine with a displacement of 1.9-litres, overhead camshaft and producing 105 hp. Depending on conditions, it was able to reach speeds significantly above 170 km/h and accelerated from 0 to 100 km/h in 14 seconds.

Series production started in May 1955. The 190 SL was available as a roadster with soft top as well as a coupé with removable hard top, with or without a soft top as an option. A broad range of prominent social figures chose this elegant sports car to complement their image, including Grace Kelly and Frank Sinatra, who drove a 190 SL in the film "Ten Thousand Bedrooms".

The Mercedes-Benz 190 SL was built up until 1963. The clearest indication of just how much loved and successful the 190 SL was is demonstrated by the production figures: between May 1955 and February 1963, no less than 25,881 cars left the assembly lines in Sindelfingen - far in excess of the maker's initial expectations.

Against this historical backdrop, decades later it seemed only reasonable to revisit the phenomenon: with the SL-Class Mercedes-Benz models now firmly established in their own right, shouldn't they be joined by a younger brother? After all, Mercedes-Benz had launched an entirely new product initiative, to which a compact roadster could lend fresh emphasis by drawing attention to the sporting heart of the Mercedes-Benz brand. An appropriate acronym for this newcomer was swiftly coined: SLK. In German, these three letters stand for the car's characteristic properties - sporty, lightweight and short - and, given the great sporting successes of Mercedes-Benz back in the 1920s and 1930s, they have an almost mystical resonance.

In Turin in April 1994, roadster enthusiasts were able to gain a first glimpse of how Mercedes-Benz believed a compact roadster should look. A brilliant silver showstopper with a distinct aura of spartan sportiness sent the trade professionals into raptures. Bruno Sacco, Head of Design for the brand at the time, made clear the company's aim: "We are exhibiting a forward-looking roadster study which delivers a unique synthesis of purist motoring pleasure with all the safety features for which Mercedes cars are renowned".

To meet these requirements, some formal individuality was called for. The SLK study reflected this thanks to its compact dimensions and some evident highlights. Short overhangs at the front and rear, as well as a distinctive wedge shape, embodied the enjoyment to be had from a hands-on driving experience. And the two "power domes" on the bonnet, running parallel to the direction of travel, were acknowledgement of the originator of all SLs dating from the 1950s. The SLK study revealed a lot of gleaming metal. Only 20 percent of the interior was covered, and the high-tech cockpit was dominated by bold shapes and high-quality materials.

To find out just how seriously the people in charge at Mercedes-Benz were taking this SLK project in its earliest days, you need look no further than the Paris Motor Show held in September of the same year. Here the company unveiled its second study, this time with vario-roof and in the form of a customised version in blue, with blue-tone leather and a range of additional luxury accessories such as automatic transmission, air-conditioning, power windows and hi-fi audio. This enabled Mercedes-Benz to demonstrate convincingly the breadth of appeal and the potential inherent in a compact roadster.

The curiosity of automotive enthusiasts was piqued. Mercedes-Benz had done the unexpected by demonstrating that a small and relatively inexpensive roadster was capable of offering a great deal of motoring pleasure while still being an absolutely serious and down-to-earth car in terms of safety and quality. This meant that the roadster studies had already opened up a new market niche, making the SLK a trendsetter even before series production had begun.

By 1996 everything was in place: the series production version of the new SLK, designated internally as the R 170, was launched at the Turin Motor Show.

The fully-lowering steel vario-roof substantively backed up the SLK's claim to being a car for all weather, attracting especially high levels of interest. Using an intelligent electro-hydraulic system, the entire roof folded down into the boot in just 25 seconds, leaving the owner free to roam under an open sky.

Safety was paramount, with two fixed roll-over bars behind the seats protecting occupants from injury if the car should overturn and, in conjunction with the exceptionally robust A-pillars, delivering a very high level of safety even when driven with the top down.

In February 2000, Mercedes-Benz substantially upgraded equipment levels for its roadster and incorporated innovations such as the Electronic Stability Program (ESP), a six-speed manual transmission, and SPEEDTRONIC in its standard equipment package. Visually, a new bumper and side skirts gave the car an even more dynamic appearance. All the attachments and door handles were painted to match the vehicle body, presenting an image of unity in both colour and form. New taillights, stainless steel trim on the exhaust tailpipe and a painted radiator grille gave the SLK design an even more commanding identity.

In the spring of 2004, the second generation of the SLK (internal model series designation R 171) was launched - offering enhanced sportiness and dynamism. Thanks to powerful engines, a newly developed chassis, direct steering and a precise six-speed shift mechanism, the second generation of the SLK provided an even more responsive driving experience. As a world first, Mercedes-Benz introduced the AIRSCARF neck-level heating system. At the touch of a button, it generates warm air which is blown out of the head restraints. This meant that drivers of the SLK were able to enjoy open-top driving and the open-air roadster experience all year round, even when outside temperatures dropped.

True to the principle of ongoing development, in 2008 the SLK underwent a comprehensive facelift. The most significant visual changes included redesigned front and rear sections and also a carefully modified interior with new instrument cluster and three-spoke sports steering wheel. The distinctive dynamic character of the two-seater was brought to the fore to particularly good effect in the SLK 350, courtesy of a high-revving V6 sports engine producing 224 kW, along with an optional Direct-Steer system. In addition, despite their significantly increased performance, all of the engines were more economical in terms of fuel consumption.

Presented in January 2011, the new Mercedes-Benz SLK takes up the mantle of sports car excellence, stylish comfort, safety and technological innovation. And thanks to new engines, the latest roadster will consume significantly less fuel. Standard equipment on the vehicle will include the ATTENTION ASSIST drowsiness detection system, with panoramic vario-roof with MAGIC SKY CONTROL offered as an optional extra. This nifty trick enables the transparent glass roof to be darkened in moments at the touch of a button. For this modern-day roadster, it's all part of the fun.

1994
April - Mercedes-Benz displays the compact roadster as a study vehicle at the Turin Motor Show
September - a second study vehicle is unveiled, this time with vario-roof and in the form of a customised version

2008
Second generation SLK gets a "facelift" 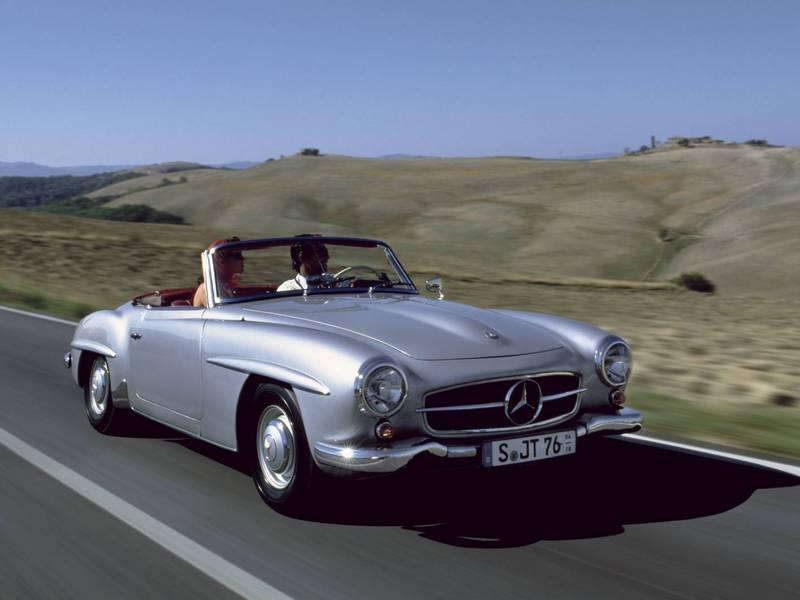 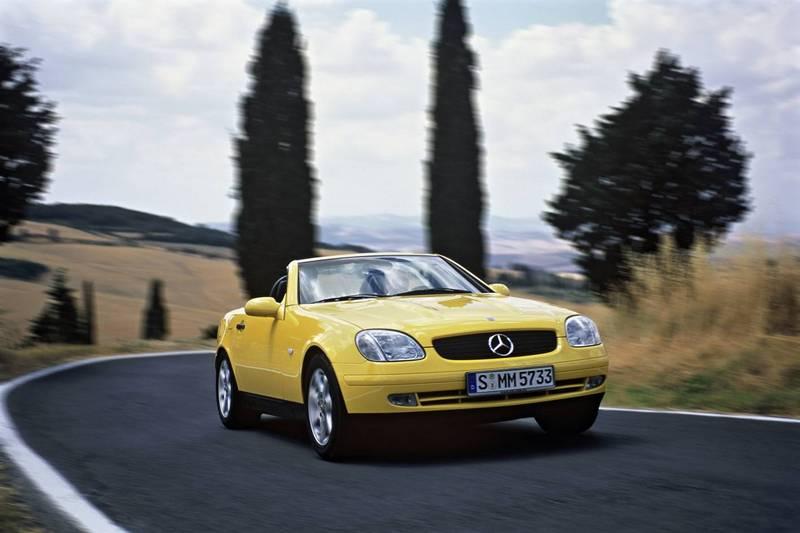 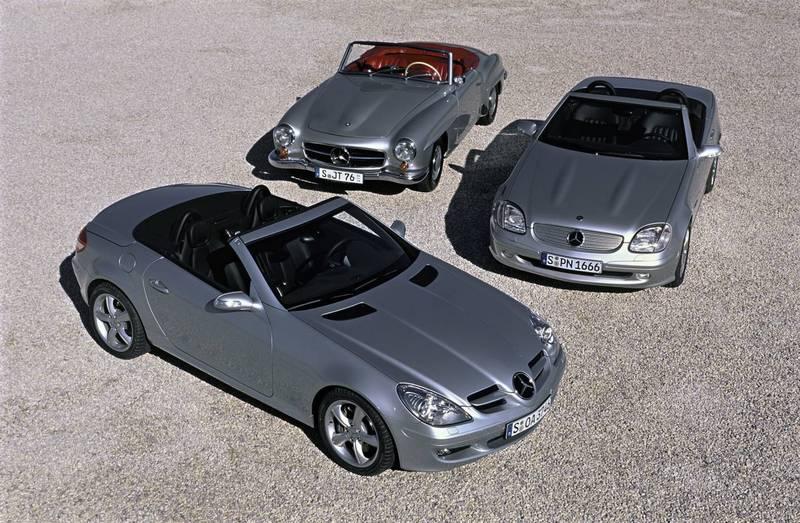